Virginia Tech geoscientists have found that shallow wastewater injections can drive widespread deep earthquake activity in oil and gas production fields. The team came up with the finding after studying the Delaware Basin in western Texas, one of the most productive and unconventional hydrocarbon fields in the United States.

Well drillers dispose of large volumes of brine– a toxic wastewater byproduct of oil and gas production– by injecting them into subsurface formations where it can drive earthquakes.

Since 2010, the Delaware Basin has seen a major increase in shallow wastewater injection and widespread deep seismicity, including the recent M5.0 event near Mentone. Most of the tremors were relatively small, but some were large and widely felt.

"It is quite interesting that injection above the thick, overall low-permeability shale reservoir can induce an earthquake within the deep basement, despite a minimal hydraulic connection," said lead author Guang Zhai, a postdoctoral research scientist in the Department of Geosciences, who is also part of the Virginia Tech College of Science and a visiting assistant researcher at the University of California, Berkeley.

"What we have found is that the so-called poroelastic stresses can activate basement faults, which is originated from the fluid injection causing rock deformation."

Study co-author Manoochehr Shirzaei, an affiliated faculty member of the Virginia Tech Global Change Center, added, "This finding is significant because it puts poroelastic stresses in the spotlight as the main driver for basinwide earthquakes in the Basin."

Predicting the amount of seismic activity from wastewater injection is troublesome, said Zhai, because it involves numerous variables, including injection depth. Although deep injection is known to be the dominant reason behind fluid pressure increase, it is still questionable how shallow injections cause earthquakes. 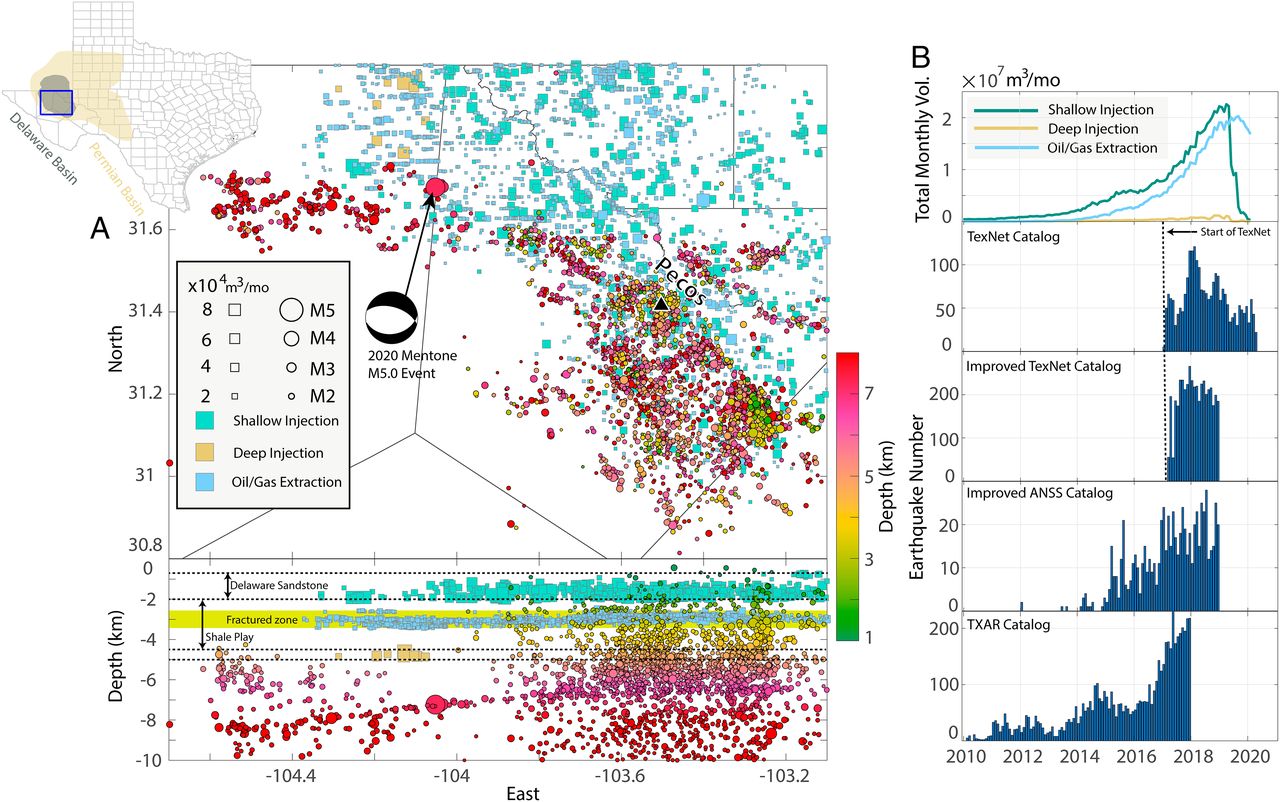 The team looked at how varying amounts of injected brine disturbed the crustal stresses deep under the Delaware Basin and how the disturbances lead to earthquakes.

"Fluids such as brine and natural groundwater can both be stored and move through rocks that are porous," Zhai explained.

The researchers used data analytics and computer modeling to imitate the large volume of fluid extraction from shale reservoirs from more than 1 500 shale production wells from 1993 to 2020, with 400 wells injecting brine in sandstone formations from 2010 to 2020.

They found that the basinwide earthquakes mainly take place where the deep stress increases due to shallow injection. This indicates that there is a causal link between deep earthquakes and shallow fluid injection via elastic stress transfer.

"One question to ask is why some areas that host lots of shallow injection lack seismicity. Our approach offers a way to investigate other significant factors that control induced earthquake."

Shirzaei added that tectonic settings also help predetermine the magnitude and likelihood of the earthquake.

"We hope the mechanism we find in this study can help people rethink the ways induced earthquakes are caused, eventually helping with better understanding them and mitigating their hazards," Zhai concluded.

"Widespread deep seismicity in the Delaware Basin, Texas, is mainly driven by shallow wastewater injection" – Zhai, G., et al. – Proceedings of the National Academy of Sciences of the United States of America – https://doi.org/10.1073/pnas.2102338118

Industrial activity away from plate boundaries can induce earthquakes and has evolved into a global issue. Much of the induced seismicity in the United States' midcontinent is attributed to a direct pressure increase from deep wastewater disposal. This mechanism is not applicable where deep basement faults are hydraulically isolated from shallow injection aquifers, leading to a debate about the mechanisms for induced seismicity. Here, we compile industrial, seismic, geodetic, and geological data within the Delaware Basin, western Texas, and calculate stress and pressure changes at seismogenic depth using a coupled poroelastic model. We show that the widespread deep seismicity is mainly driven by shallow wastewater injection through the transmission of poroelastic stresses assuming that unfractured shales are hydraulic barriers over decadal time scales. A zone of seismic quiescence to the north, where injection-induced stress changes would promote seismicity, suggests a regional tectonic control on the occurrence of induced earthquakes. Comparing the poroelastic responses from injection and extraction operations, we find that the basement stress is most sensitive to shallow reservoir hydrogeological parameters, particularly hydraulic diffusivity. These results demonstrate that intraplate seismicity can be caused by shallow human activities that poroelastically perturb stresses at hydraulically isolated seismogenic depths, with impacts on seismicity that are preconditioned by regional tectonics.