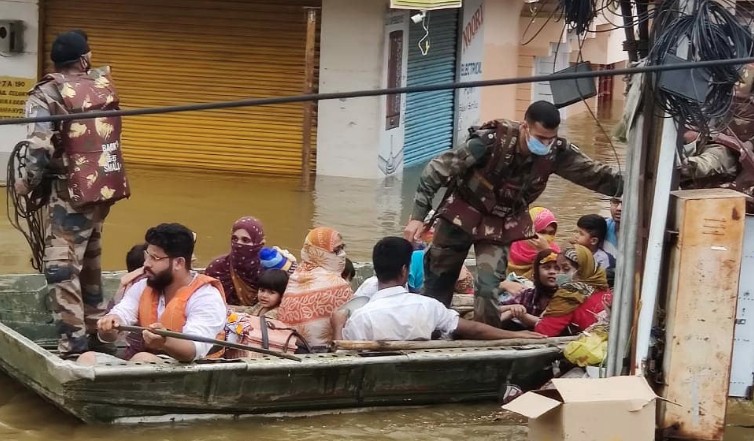 Heavy rains affecting parts of India over the past 7 days claimed at least 47 lives in Maharashtra and 50 in Telangana. In Maharashtra alone, more than 900 000 hectares (2.2 million acres) of crops have been damaged across state.

28 of the 47 people in Maharashtra have died in the Pune division, 16 in Aurangabad division, and 3 in coastal Konkan.

Solapur in western Maharashtra and Osmanabad in the central part of the state are the worst-affected.

Many parts of Pune and Pimpri-Chinchwad were left withouit power.

The monthly average rainfall for October for most cities in Maharashtra is less than 100 mm (3.9 inches), Skymet Weather meteorologists noted.

The monthly average rainfall of October for Mumbai is 89.3 mm (3.5 inches).

Aakash Chatake, a farmer from the village whose 4 ha (10 acres) of sugarcane and onion were submerged by floodwater, said water from Sina river had flown 1.5 km (0.9 miles) beyond the river bank.

According to Chatake, the main reason for the flood was the sudden opening of Kolewadi dam, which released water into Sina river.

"Usually, the excess water of Sina drains into Bhima river, but as Bhima is already flooded, the water breached the riverbank and inundates areas beyond it," he said.

At least 50 people have died in Telangana, many of them in the capital Hyderabad, since Tuesday night (LT), October 13, 2020. According to the India Meteorological Office (IMD), Ghatkesar on the city outskirts received record rainfall of 322 mm (12.6 inches) from Tuesday night to Wednesday morning.