The closest black hole to Earth– lying just 1 000 lightyears away– has been discovered by a team of astronomers from the European Southern Observatory (ESO) and other institutes. Scientists say more similar black holes could be found in the future.

"We were totally surprised when we realized that this is the first stellar system with a black hole that can be seen with the unaided eye," said study co-author Petr Hadrava, Emeritus Scientist at the Academy of Sciences of the Czech Republic in Prague.

The black hole is closer to our solar system than any other found and forms part of a triple system that can be visible to the naked eye. The research team found evidence for the object by monitoring its two companion stars with the MPG/ESO telescope at La Silla Observatory in Chile.

The system called HR 6819, located at the constellation of Telescopium, can be viewed from the southern hemisphere on a clear, dark night sky without binoculars or a telescope.

It was originally observed by the researchers as part of a study of double-star systems. As they examined their observations, they were surprised to see a third body that was undiscovered in HR 6819, which is a black hole.

FEROS spectrograph observations showed that one of the two visible stars orbits an invisible object every 40 days, while the second star is at a huge distance from the inner pair. 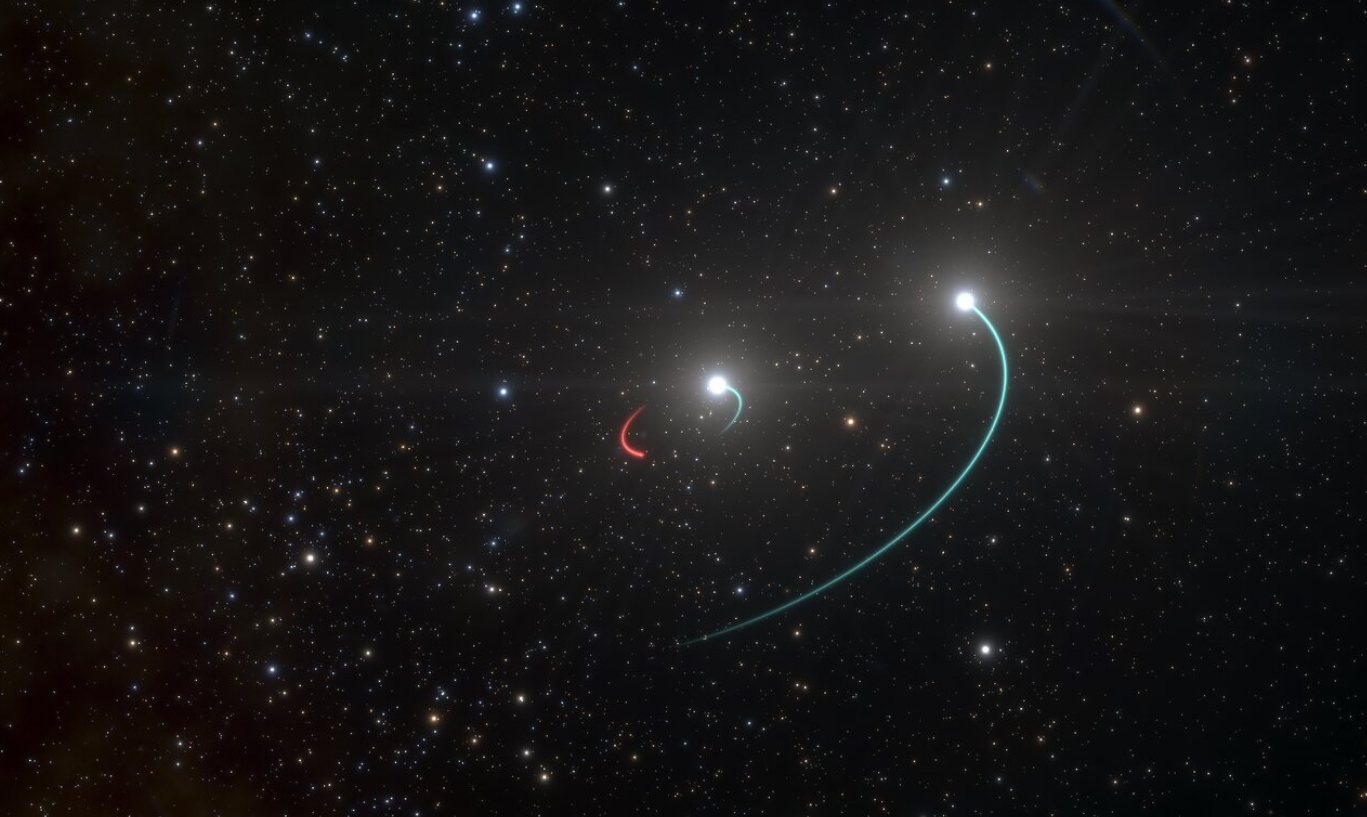 "The observations needed to determine the period of 40 days had to be spread over several months. This was only possible thanks to ESO's pioneering service-observing scheme under which observations are made by ESO staff on behalf of the scientists needing them," said co-author Dietrich Baade, Emeritus Astronomer at ESO in Garching.

The black hole is one of the first stellar-mass black holes discovered that do not violently interact with their environment, thus, appearing totally black.

"An invisible object with a mass at least four times that of the Sun can only be a black hole," lead author and ESO scientist Thomas Rivinius concluded. The scientists were able to spot its presence and calculate its mass by studying the star's orbit in the inner pair.

Only a couple of dozen black holes have been found in our galaxy so far, and almost all of them strongly interact with their environment, spewing powerful X-rays that make their presence felt.

Scientists estimate that over the course of Milky Way's lifetime, many stars collapsed into black holes as they died. The unseen black hole in HR 6819 may give clues about where the other hidden black holes in our galaxy might be. 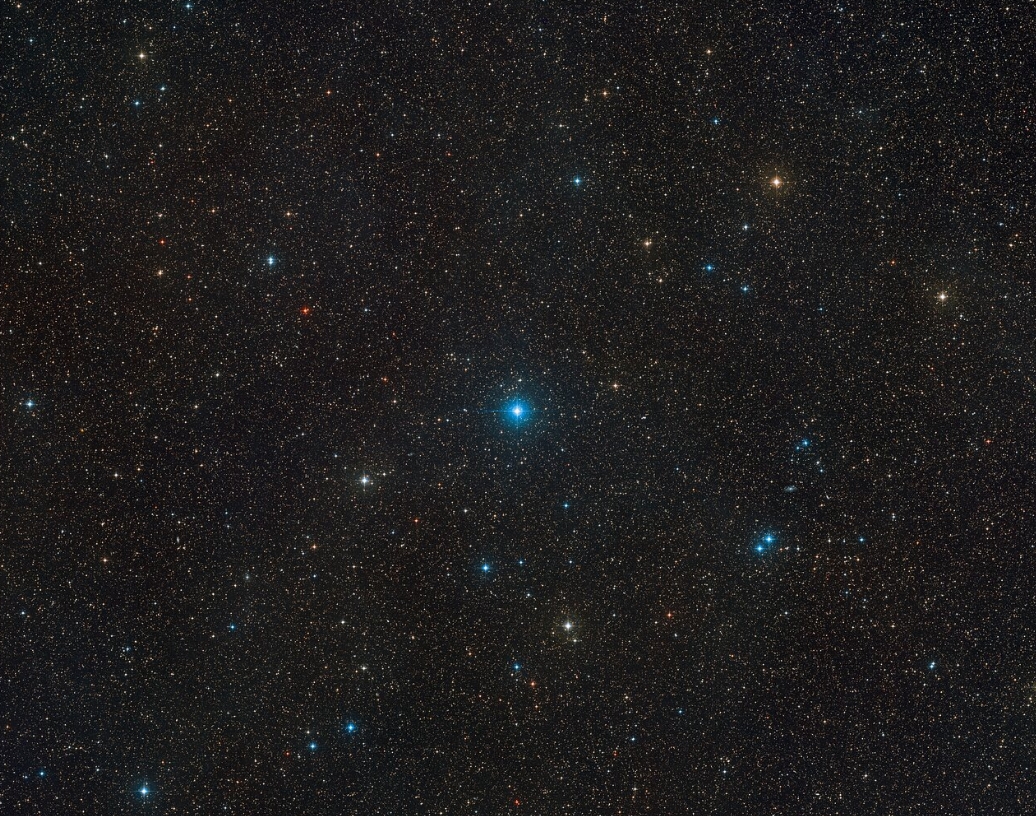 Wide-field view of the region of the sky where HR 6819 is located. Image credit: ESO/Digitized Sky Survey 2, Davide De Martin

"There must be hundreds of millions of black holes out there, but we know about only very few. Knowing what to look for should put us in a better position to find them," Rivinius said. Baade remarked that finding a black hole in a triple system this near means we are just seeing "the tip of an exciting iceberg."

Astronomers believe that this discovery could also shed light on a second system. "We realized that another system, called LB-1, may also be such a triple, though we'd need more observations to say for sure," said co-author Marianne Heida, a postdoctoral fellow at ESO.

"LB-1 is a bit further away from Earth but still pretty close in astronomical terms, so that means that probably many more of these systems exist. By finding and studying them we can learn a lot about the formation and evolution of those rare stars that begin their lives with more than about eight times the mass of the Sun and end them in a supernova explosion that leaves behind a black hole."

These triple systems may also shed light on massive merges between black holes, stars, or some configuration of the two that generate gravitational waves.

Several dozen optical echelle spectra demonstrate that HR 6819 is a hierarchical triple. A classical Be star is in a wide orbit with an unconstrained period around an inner 40 d binary consisting of a B3 III star and an unseen companion in a circular orbit. The radial-velocity semi-amplitude of 61.3 km s−1 of the inner star and its minimum (probable) mass of 5.0 M⊙ (6.3 ± 0.7 M⊙) imply a mass of the unseen object of ≥4.2 M⊙ (≥5.0 ± 0.4 M⊙), that is, a black hole (BH). The spectroscopic time series is stunningly similar to observations of LB-1. A similar triple-star architecture of LB-1 would reduce the mass of the BH in LB-1 from ∼70 M⊙ to a level more typical of Galactic stellar remnant BHs. The BH in HR 6819 probably is the closest known BH to the Sun, and together with LB-1, suggests a population of quiet BHs. Its embedment in a hierarchical triple structure may be of interest for models of merging double BHs or BH + neutron star binaries. Other triple stars with an outer Be star but without BH are identified; through stripping, such systems may become a source of single Be stars.