Seismic activity is still ongoing on the Reykjanes Peninsula, Iceland but the number of earthquakes has decreased significantly in recent weeks, IMO reported at 07:41 UTC on May 11, 2020. The current observations and the course of events over the last several months suggest that there is an active long-term process ongoing in the area. The uncertainty phase that Civil Protections declared due to this activity is still in force.

This seismic activity is due to deformation in the area but the most likely explanation of the deformation is magmatic intrusion. There has been no uplift detected around Mt. Thorbjorn since mid-April but minor ground deformation is still being detected over a greater area in the peninsula, according to conclusions made by Scientific Advisory Board who met on April 30 to discuss and review the current activity in Reykjanes Peninsula.

"In the beginning of April, the uplift in Thorbjorn decreased and, in the second part of the month, it stopped. The area around Thorbjorn is now most likely recovering after the large induced stress, and the injected magma is cooling down and contracting," scientists said.

Along with reduced deformation, seismic activity has been decreasing significantly. 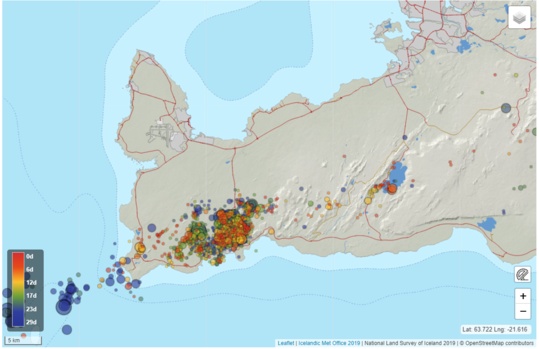 "These data indicate that the injection of magma beneath Thorbjorn has stopped and this second phase of uplift due to magma intrusion can be considered closed. Even though there are no observations of ongoing uplift around Thorbjorn, there are indications of minor deformation over a larger area."

"The current observations and the course of events over the last several months suggest that there is an active long-term process ongoing in the area. The possibility of renewed activity in the near future at Thorbjorn Reykjanes or elsewhere on the Reykjanes Peninsula cannot be discarded."

The board emphasized that it's still important to keep in mind the seismic hazard is present in the Reykjanes Peninsula and it is important to take preventive measures.

The best way to prevent damage or injuries is to properly handle furniture and other interior objects so that they do not fall off in the event of an earthquake. The effects of an earthquake on the Reykjanes Peninsula can be felt in a large area, and the capital area is not excluded.