Public interest for noctilucent clouds rose sharply in 2019 after record-setting outbreak across the northern hemisphere. The 2020 season is expected to start mid- to late-May or early June, but at the moment, it doesn't seem like 2020 will be a repeat of 2019.

In an attempt to provide NLC season forecast for this year, Lynn Harvey of the University of Colorado's Laboratory for Atmospheric and Space Physics has taken a look at moisture and temperature data — key ingredients of NLCs — collected by NASA's Microwave Limb Sounder (MLS).

In terms of summer mesopause temperature and water vapor, the year looks average, as seen in the following plots: 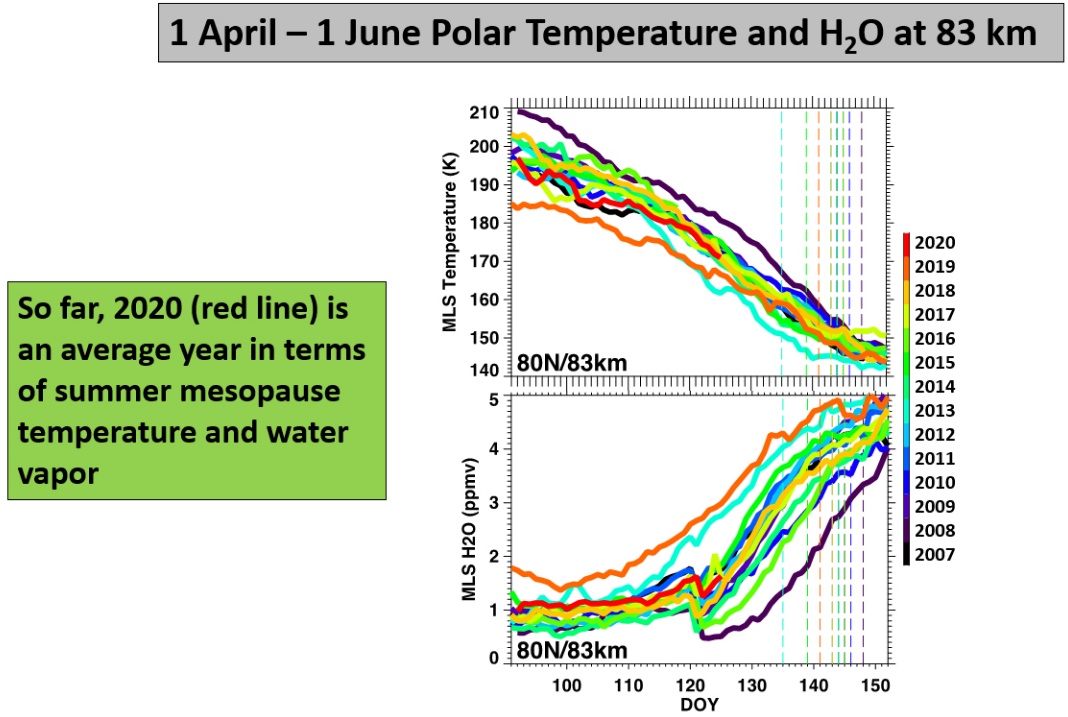 "So far, 2020 is shaping up to be fairly average," Harvey told Dr. Tony Phillips of SpaceWeather.com. "Based on the MLS data, I would guess that the first NLCs will be spotted in two weeks or so," she says.

Supercharged by extra moisture in the mesosphere, the 2019 northern hemisphere noctilucent cloud season started at the end of May and then increased significantly over the next two weeks, with NLCs seen as low as San Francisco Bay Area, California for the first time ever and throughout most of Europe since then.

Some observers even noticed rare red NLCs on June 21. "It happened around midnight," said Marek Nikodem of Szubin, Poland. "The top of the clouds developed a reddish-purple canopy." It didn't last long, but he was able to photograph the amber crown before it faded away."

My panorama of the whole display of #noctilucentclouds last night over Preston #Lancashire pic.twitter.com/yE043NSPbR

The first known observation of NLCs dates back to 1885, two years after the 1883 eruption of Krakatoa.

At first, they were only seen at higher latitudes, but have recently started appearing ever lower in latitudes.