New data provided by NASA's AIM (Aeronomy of Ice in the Mesosphere) satellite mission shows that the first noctilucent clouds (NLCs) of summer have been trending earlier since 2007, when the spacecraft was launched. Each year, NLCs first appear in the Arctic and then spin outward to lower latitudes but they were recently seen appearing as far south as Los Angeles and Las Vegas, U.S. setting records for low-latitude sightings.

"The season appears to be starting earlier, which is making it longer by about 5 days," said Cora Randall of the University of Colorado’s Laboratory for Atmospheric and Space Physics (LASP).

Randall created the following graph, showing data from AIM's CIPS sensor since 2007. Each blue box shows the day of the year when the sensor detected the first NLC of the northern hemisphere's summer: 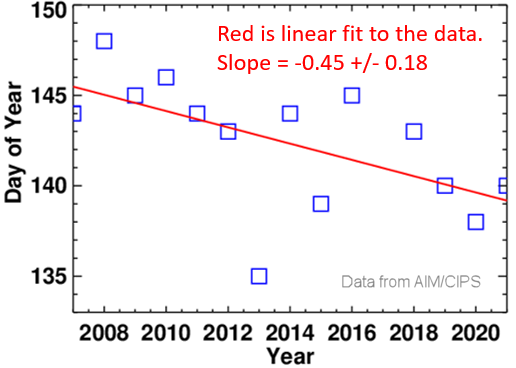 AIM data also show that seasons do not end later — they still peak mid-June to July and end in August.

In recent years, the clouds have started appearing farther south toward the equator, breaking records for low-latitude sightings, and in 2019 and 2020 we had major outbreaks over North America and Europe.

"The southern hemisphere stratosphere is very unusual this year," Randall said at the end of 2020. "The ozone hole is exceptionally large, until recently zonal winds have been blowing in the wrong direction, and overall the stratosphere is much more 'winter-like' than it should be in December." [Tag: noctilucent clouds]

First NLCs of the 2021 season in the northern hemisphere appeared over Poland, Czech Republic, Canada, and Scotland, among other countries, on May 25 and 26. In only four days since the clouds were first seen, their coverage of the Arctic has multiplied 10 times.

Dr. Tony Phillips of the SpaceWeather.com said the reason for their early start this year may be extra water in the mesosphere as satellite data show that 2021 is one of the wettest years since 2007. "NLCs have more water to work with, thus, it started early in the season and spread quickly."

According to Lynn Harvey (LASP), temperatures at the mesosphere have been breaking 14-year records at the beginning of June last year, causing NLCs to spill across the Arctic and descend to middle latitudes.

The plots she made at the time showed that 2020 was shaping up to be a very cold and wet year:

The AIM mission was launched on April 25, 2007, and has been extended by NASA through the end of FY20. During this time the instruments monitor noctilucent clouds to better understand their variability and possible connection to climate change.

The primary goal of the mission is to help scientists understand whether the clouds' ephemeral nature, and their variation over time, is related to Earth's changing climate – and to investigate why they form in the first place.

By measuring the thermal, chemical and other properties of the environment in which the mysterious clouds form, the AIM mission will provide researchers with a foundation for the study of long-term variations in the mesosphere and its relationship to global climate change.

In addition to measuring environmental conditions, the AIM mission will collect data on cloud abundance, how the clouds are distributed, and the size of particles within them.