The cause of the deepest earthquakes on Earth has been a mystery to scientists for more than a century. In a new study, a team of scientists may have solved the case by identifying water as the key factor that causes deep-focus quakes.

Most earthquakes occur near the Earth's surface, down to around 70 km (43 miles). These happen when stress builds up at a fracture between two blocks of rock or a fault, causing them to slide abruptly past each other.

However, deeper into the Earth, intense pressures generate too much friction to allow this kind of sliding to happen and the high temperatures improve the ability of rocks to deform to accommodate changing stresses.

Although theoretically unexpected, scientists have been able to determine earthquakes that originate more than 300 km (186 miles) below the surface since the 1920s.

"The big problem that seismologists have faced is how it's possible that we have these deep-focus earthquakes at all," said Carnegie scientist Lara Wagner.

"Once you get a few tens of kilometers down, it becomes incredibly difficult to explain how we are getting a slip on a fault when the friction is so incredibly high."

Ongoing studies over the past several decades have shown that water plays a key role in intermediate-depth earthquakes or those that occur between 70 and 300 km (43 and 186 miles) below Earth's surface. In these instances, water is released from minerals, which weakens the rock around the fault and allows the blocks of rocks to slip.

But scientists didn't think this phenomenon could also explain deep-focus earthquakes because it was previously thought that water and other fluid-creating compounds couldn't make it far enough down the Earth's interior to generate a similar effect. 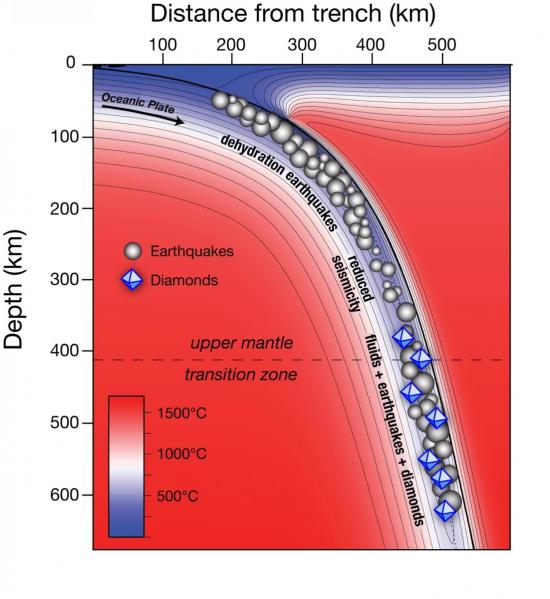 "Diamonds form in fluids. If diamonds are there, fluids are there," said co-author Steven Shirey.

The diamond's inclusions had the instinct chemical signature of similar materials found in oceanic crust, which means that the water and other materials were not created deep in the Earth's interior but instead, carried down as part of a sinking ocean plate.

"The seismology community had moved away from the idea that there could be water that deep. But diamond petrologists like Steve were showing us samples and saying 'No, no, no.' There's definitely water down here' So then we all had to get together to figure out how it got down there," Wagner said.

Wagner, along with co-author Peter van Keken, tested the idea with advanced computational models to simulate temperatures of sinking plates at greater depths than what had been attempted before. The team showed that even though warmer plates did not hold water, the minerals in the colder plates could carry water to the depths associated with deep-focus earthquakes.

"The nature of deep earthquakes is one of the big questions in geoscience," said Shirey.

The study is unusual in applying four different disciplines– which are geochemistry, seismology, geodynamics, and petrology– to the same question.

"We needed all four of these different disciplines to come together to make this argument. It turned out we had them all in-house at Carnegie," he added.

The nature and cause of deep earthquakes remain enduring unknowns in the field of seismology. We present new models of thermal structures of subducted slabs traced to mantle transition zone depths that permit a detailed comparison between slab pressure/temperature (P/T) paths and hydrated/carbonated mineral phase relations. We find a remarkable correlation between slabs capable of transporting water to transition zone depths in dense hydrous magnesium silicates with slabs that produce seismicity below ∼300-km depth, primarily between 500 and 700 km. This depth range also coincides with the P/T conditions at which oceanic crustal lithologies in cold slabs are predicted to intersect the carbonate-bearing basalt solidus to produce carbonatitic melts. Both forms of fluid evolution are well represented by sublithospheric diamonds whose inclusions record the existence of melts, fluids, or supercritical liquids derived from hydrated or carbonate-bearing slabs at depths (∼300–700 km) generally coincident with deep-focus earthquakes. We propose that the hydrous and carbonated fluids released from subducted slabs at these depths lead to fluid-triggered seismicity, fluid migration, diamond precipitation, and inclusion crystallization. Deep focus earthquake hypocenters could track the general region of deep fluid release, migration, and diamond formation in the mantle. The thermal modeling of slabs in the mantle and the correlation between sublithospheric diamonds, deep focus earthquakes, and slabs at depth demonstrate a deep subduction pathway to the mantle transition zone for carbon and volatiles that bypasses shallower decarbonation and dehydration processes.