Due to an increase in seismicity above background levels over at least the last 8 hours AVO is raising the Aviation Color Code to YELLOW and Alert Level to ADVISORY at Semisopochnoi.

No explosive activity has been detected on the Adak infrasound array and clouds currently obscure satellite views of the volcano.

No eruptive activity has been detected at Semisopochnoi since November 1, 2018 when a satellite link for transmitting seismic data failed. Since that time, no changes have been observed in satellite data, and no explosions have been detected from the Adak Island infrasound array; the last explosion detected by infrasound was October 31.

On Wednesday, December 19, AVO lowered the Aviation Color Code to UNASSIGNED and Alert Level to UNASSIGNED for Semisopochnoi due to the lack of evidence for ongoing eruptive activity. 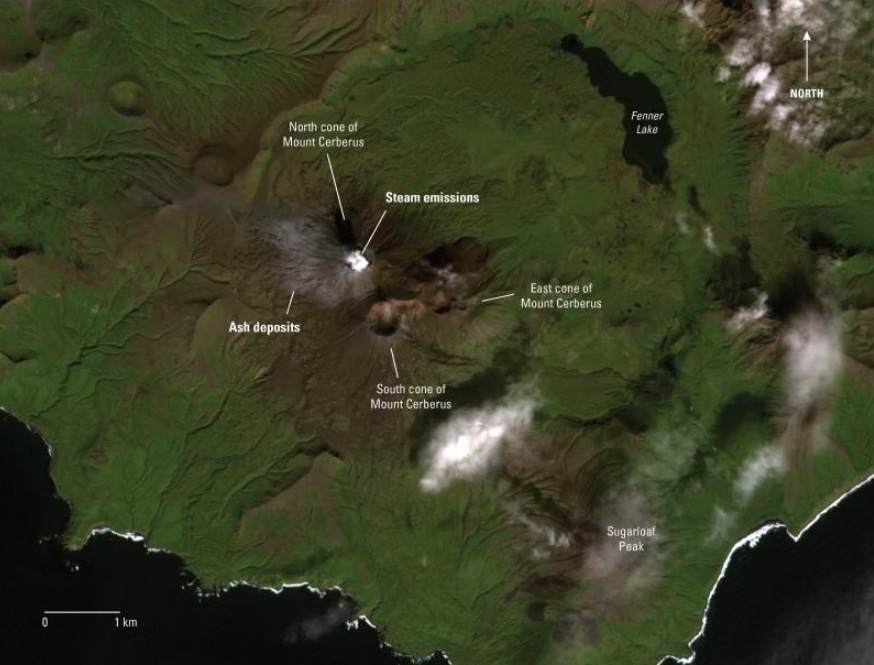 Pauses in eruptions lasting weeks to months are known to occur during volcanic eruptions. A return to eruptive activity may occur with little or no warning.

Remote Semisopochnoi volcano occupies the largest, young volcanic island in the western Aleutians. The volcano is dominated by an 8-km (5-mile) diameter caldera that contains a small lake and a number of post-caldera cones and craters.

The age of the caldera is not known with certainty but is likely early Holocene. The last known eruption of Semisopochnoi occurred in 1987, probably from Sugarloaf Peak on the south coast of the island, but details are lacking.

Another prominent, young post-caldera landform is Mount Cerberus, a three-peaked cone cluster in the southwest part of the caldera. The island is uninhabited and part of the Alaska Maritime National Wildlife Refuge. It is located 65 km (40 miles) northeast of Amchitka Island and 200 km (130 miles) west of Adak.