The Australian Bureau of Meteorology has issued a Severe Weather Warning for the northern Cape York Peninsula and Torres Strait Islands with heavy rainfall, damaging winds and abnormally high tides the main impacts. Meanwhile, a new tropical cyclone is brewing near the coast of northern Western Australia and unusual, wild and wintry weather is striking its south.

Water levels on today's high tide could exceed the highest tide of the year for some islands, BOM said January 23.

Concurrently a Flood Watch has been issued for northern Cape York Peninsula catchments, with the Flood Watch area likely to be extended further south during the coming days.

The monsoon trough lies over the far northern Gulf of Carpentaria, Cape York Peninsula and the northwest Coral Sea and will remain active well into the weekend.

Areas of heavy rainfall and thunderstorms are likely to increase over far north Queensland coastal districts including Port Douglas and Cairns during the Australia Day long weekend with heavy falls possible for areas which have already received significant rainfall and flooding over recent weeks.

With riverine and flash flooding possible, visitors to the area are urged to familiarise themselves with local roads and conditions.

A tropical low currently embedded within the trough near the Cape York Peninsula is expected to move slowly southwest or southeast over the coming days, and is likely to develop if over water. 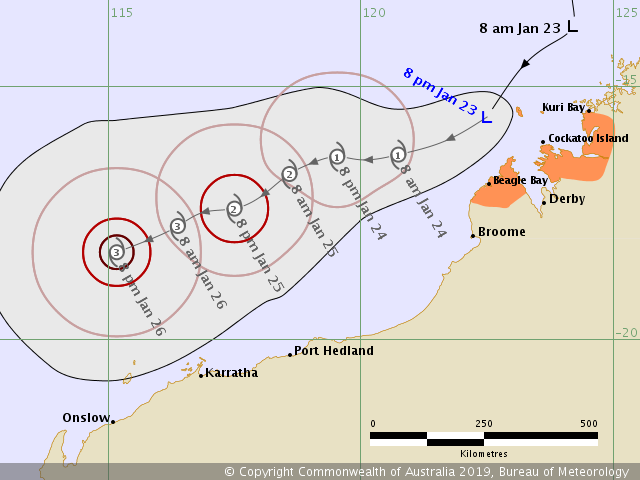 After a string of typical summer days in the region, a developing low pressure system is bringing a cool change, heavy rain and damaging winds, with gusts of up to 90 km/h (56 mph) possible today, ABC reports.

"This weather is very unusual for this time of year," Bureau of Meteorology (BOM) senior forecaster Adam Conroy said.

"It's more typical of a strong winter storm, so it's pretty rare to get one of these systems developing in January. This sort of weather will be quite wintry and windy, so given that a lot of people would be out having their summer holidays it's important that they listen to the warnings."

A tale of two lows has the night shift working hard this morning. A severe weather warning is current for an unseasonable and rapidly deepening low over the southwest. Meanwhile, a cyclone watch is current for a system brewing in the Timor Sea. https://t.co/1mPTPcY1iH #windy pic.twitter.com/PXPMFNLbGN