The European vegetable processing sector raised concerns last month about potential losses to crop quantity and quality as a result of the very hot summer and prolonged drought conditions in all leading European production regions. Today, these regions have been affected by exceptional weather conditions, where crop evaporation levels have been exceptionally high, many watercourses have run dry, and extraction of irrigation water has frequently been restricted.

With the hot and dry weather continuing throughout July across most parts of the continent, vegetables have continued to suffer and crop yields have fallen sharply. Today the situation for vegetable growers and processors is the most serious that has been experienced in the last forty years, according to the European Association of Fruit and Vegetable Processors (PROFEL).

In addition, 2018 is the third year in a row that the sector has faced serious weather-related issues, exposing the vulnerability of European vegetable growers and processors to changing European weather patterns. 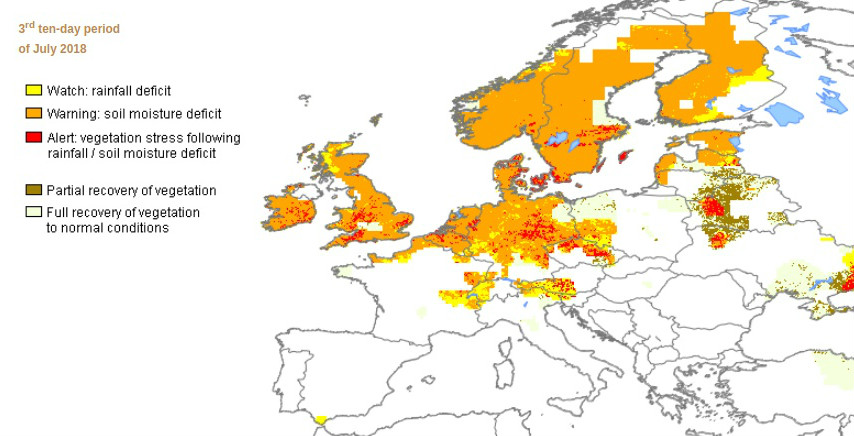 This year’s weather has particularly impacted the frozen and canned vegetable sector, PROFEL said in a statement, adding that field losses have resulted in reduced and irregular deliveries of fresh vegetables to the processing factories, leading to increased production costs and less products processed.

Significant reductions in field yields are reported for peas, ranging from 20 up to 50%.

For beans (green beans, yellow beans and flageolets), the situation is equally concerning and losses of up to 50% are reported today.

In certain production regions in southern Europe, the first harvest of beans has also been affected by heavy storms (floods and hail). For onions losses are reported between 15 and 50%; courgettes and spinach are also affected. In many regions, the sowing of second crops: spinach, beans or cauliflower, is simply not possible due to the drought.

With the drought persisting, concerns are also raised for autumn and winter harvested crops such as kale, red and white cabbage, Brussels sprouts and leeks.

For these crops, it is clear already that the weather conditions have been too dry and that this will result in yields well below average.

In addition, in some regions sowing of kale has not been possible. With no significant rain forecast for the coming week, the scenario is likely to become more serious as every week passes.

In a number of countries, national governments have entered discussions with farmers’ organizations which may lead to the declaration of a state of emergency – act of God – for this agricultural crisis, and to the provision of financial support for the farmers.