At least 8 people are missing and hundreds were evacuated as Very Severe Cyclonic Storm "Mekunu" ravaged Yemen's island of Socotra on Wednesday night, May 23, 2018. Mekunu is another unusual tropical cyclone to form in the Arabian Sea within 10 days. The storm is expected to make landfall over the Yemen – Oman border region, close to the southern Omani city of Salalah early May 26 as Category 2 or 3 hurricane equivalent. This will be the first such landfall in satellite era. The region could experience its yearly rainfall average in just one day.

Mekunu brought strong winds and thunderstorms, causing severe flooding and damage to houses across the small island of Socotra. Some of the homes have been completely destroyed as the center of Mekunu moved just east of the island.

"The situation is extremely critical," former governor of the island, Salem Abdullah Al Socotri, said. "The roads are flooded, and we cannot get out of the northern coastal town of Hadibu to see what is going on in other areas of the island. Also, the strong winds have intercepted telecommunications, so we are almost isolated."

Four of the 8 missing were crew on board a boat that sank in the Arabian Sea and are suspected to be dead. At least three vessels have gone off the radar, a source told The National.

Mekunu is the fourth hurricane-strength cyclone to hit southern Yemen in recent years.

Cyclone Sagar hit earlier this month, and in late 2015, Socotra was hit by Cyclone Chapala followed just days later by Cyclone Megh – which destroyed hundreds of homes and killed 18 people on the island. 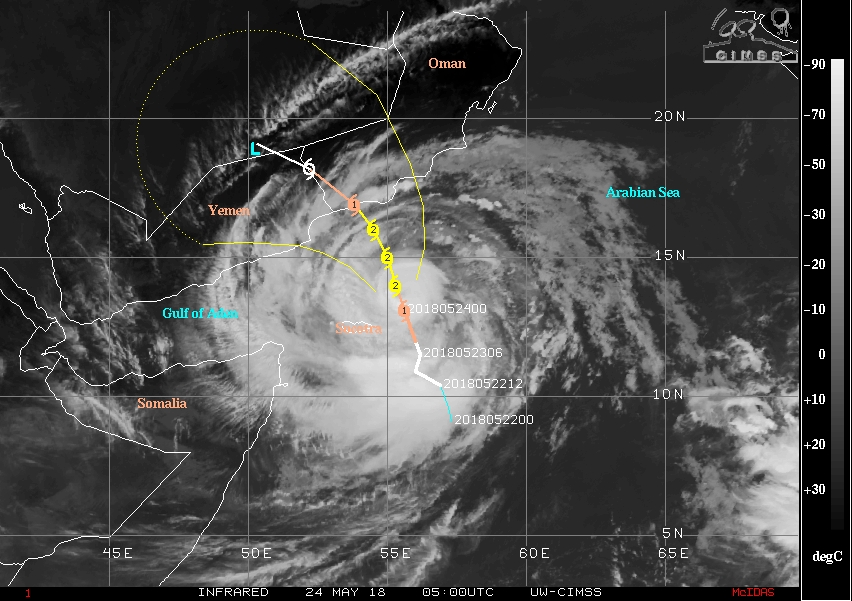 According to RSMC New Delhi, authority for this part of the world, the Very Severe Cyclonic Storm ‘Mekunu’ over Westcentral & adjoining Southwest Arabian Sea moved further north-northwestwards with a speed of 11 km/h (7 mph) over the past 6 hours. At 05:30 UTC today, it was located about 180 km (112 miles) ENE of Socotra Islands and 440 km (274 miles) SSE of Salalah, Oman.

Salalah has a population of about 200 000, and typically receives just 127 – 203 mm (5 to 8 inches) of rain in an entire year. This means that Mekunu could bring that same amount in under a day, presenting the risk of life-threatening flash flooding, in addition to damage from high winds.

The flood threat will extend to northeastern Yemen and the desert of Saudi Arabia.

According to the National Oceanic and Atmospheric Administration's database, no Category 2 or stronger storm has made landfall in southwestern Oman, making this a unique threat.

The last tropical cyclone with a hurricane-equivalent intensity to track near southwestern Oman's Dhofar Governorate was in May 1959.