The moderate-level eruption of lava continues from multiple points along the central and northeast end of the active fissure system. Volcanic gas emissions have tripled as a result of the voluminous eruptions from the erupting fissures so SO2 concentrations are likely elevated to higher levels throughout the area downwind of the vents. Residents in lower Puna should remain informed and heed Hawaii County Civil Defense closures, warnings, and messages.

The fountains from Fissure 22 feed a single lava channel that reaches the coast just north of MacKenzie State Park. The actual point of entry has continued shifting to the west.

Fountains erupted from Fissures 5, 6, 13, and 19 continued to feed a lava flow advancing to the south along the west side of the Fissure 22 flows and may reach the ocean in the hours ahead. 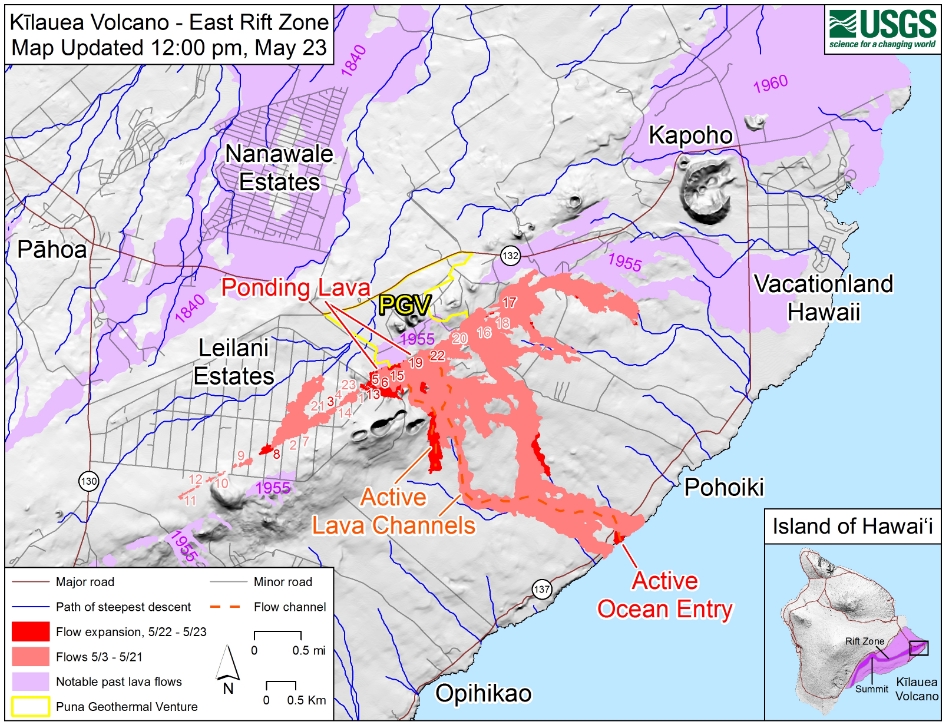 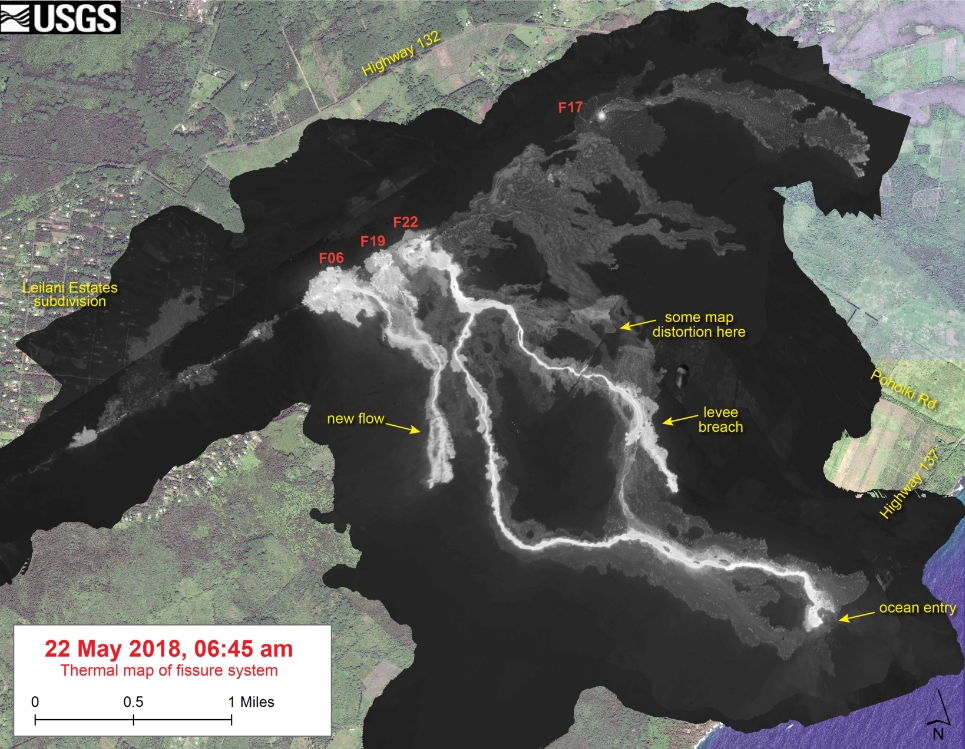 This thermal map shows the fissure system and lava flows as of 06:45 am on Tuesday, May 22. The primary lava flow originates from Fissure 22, but a new flow has been active over the past day from the Fissure 6 area. The black and white area is the extent of the thermal map. Temperature in the thermal image is displayed as gray-scale values, with the brightest pixels indicating the hottest areas. The thermal map was constructed by stitching many overlapping oblique thermal images collected by a handheld thermal camera during a helicopter overflight of the flow field. Image credit: USGS, Digital Globe

Volcanic gas emissions have tripled as a result of the voluminous eruptions from the erupting fissures so SO2 concentrations are likely elevated to higher levels throughout the area downwind of the vents. Moderate trade winds mean that areas downwind of Kilauea gas emission sources may experience varying levels of vog.

A blue burning flame of methane gas was observed in the cracks on Kahukai Street on May 23. When lava buries plants and shrubs, methane gas is produced as a byproduct of burning vegetation. Methane gas can seep into subsurface voids and explode when heated, or as shown in the video below, emerge from cracks in the ground several feet away from the lava. When ignited, the methane produces a blue flame.

The ocean entry is a hazardous area.

Hazards include walking on uneven, glassy lava flow surfaces and around unstable, vertical sea cliffs. Venturing too close to an ocean entry on land or the ocean exposes you to flying debris from sudden explosive interaction between lava and water. Also, the lava delta is unstable because it is built on unconsolidated lava fragments and sand. This loose material can easily be eroded away by surf, causing the new land to become unsupported and slide into the sea. In several instances, such collapses have also incorporated parts of the older sea cliff. Additionally, the interaction of lava with the ocean creates "laze", a corrosive seawater plume laden with hydrochloric acid and fine volcanic particles that can irritate the skin, eyes, and lungs.

Multiple small eruptions of ash occurred over the past day, all ejecting ash to under 3 km (10 000 feet) above sea level. One of the largest occurred about 10:30 HST, May 23. Additional explosions are possible at any time.

At this time, based on HVO web cameras, a robust plume of gas and steam is billowing out of the Overlook vent and drifting generally southwest.

At any time, activity may again become more explosive, increasing the intensity of ash production and producing ballistic projectiles very near the vent. Communities downwind should be prepared for ashfall as long as this activity continues.

Compilation of three short videos from helicopter overflights of the fissure complex, in Kīlauea Volcano's lower East Rift Zone on May 22, 2018. Fissure 22 is the dominant fissure, with lava fountaining to 50 m (about 160 ft) or more in height.

Gov. David Ige and the state’s Civil Defense chief expressed confidence Tuesday, May 22 that the risk of a hydrogen sulfide release at Puna Geothermal Venture has been mitigated as lava creeps onto its property.

While mechanical plugs aren’t installed yet, Hawaii Emergency Management Agency Administrator Tom Travis said 10 of the 11 wells have been 'quenched,' and pressure was declining at the last well of concern. If lava from the ongoing Kilauea eruption in lower Puna covered a wellhead, it’s expected that its integrity will hold and an uncontrolled gas release won’t occur.

Hawaiian Volcano Observatory reports a new lava flow is expected to enter the ocean east of MacKenzie State Park tonight. Eruption activity continues in the Lower East Rift Zone. The middle portion of the fissure system is the most active with flows and ground cracking in the area of Leilani Estates and Lanipuna Gardens.

Due to volcanic activity, information on Puna Geothermal Venture is provided for your awareness:

To help our residents, we are distributing free masks for ash protection:

Due to the current activity, residents down rift should be prepared to voluntarily evacuate at a moment’s notice. Stay alert to messages issued by Civil Defense.