Sea levels around the world have risen by 1.7 millimeters (0.07 inches) on average each year since 1880, but in recent years, scientists have observed a rapid increase in sea level in the north Indian Ocean. Tide gauge records and other datasets reveal the pace of sea level rise in the north Indian Ocean has accelerated to 3.1 millimeters (0.12 inches) per year within the last three decades.

The accelerating sea level rise has confounded scientists but new research claims weakening of South Asian monsoons may be to blame.

A new study in Geophysical Research Letters, a journal of the American Geophysical Union, uses climate and sea level data from the past several decades to connect the Indian Ocean’s sea level rise to its changing monsoon circulation.

The Indian summer monsoon has been decreasing for the last three to four decades and the new study suggests the weakened circulation leaves heat trapped in the north Indian Ocean, resulting in higher sea levels.

The Indian Ocean’s rapid sea level rise affects a highly populated region of the world. Around 2.6 billion people, or 40% of the global population, live in and around the Indian Ocean, according to Swapna Panickal, a climate scientist from the Centre for Climate Change Research at the Indian Institute of Tropical Meteorology in Pune, India and lead author of the new study. The 2016 United Nations Global Environmental Outlook predicts that 65 million people in India and Bangladesh alone will be threatened by rising sea levels by 2050.

Warming global temperatures cause sea levels to rise by melting continental ice sheets and inducing seawater molecules to heat up and expand, also known as thermal expansion. Unlike other oceans, the Indian Ocean’s sea level rise is primarily driven by thermal expansion.

Until now, scientists did not know why this kind of sea level rise occurred in the Indian Ocean. Past studies have examined the north Indian Ocean’s sea level rise for shorter periods, but the new study proposes a mechanism for sea level change occurring across several decades.

The Indian monsoon is one of the largest monsoon systems in the world. Winds blow from the northeast across the Indian Ocean towards the equator during the dry winter months, then change direction during India’s rainy summer season, blowing back towards the Indian subcontinent.

The summer monsoon winds are largely responsible for transporting heat southward from the north Indian Ocean towards the equator. However, evidence from past studies suggests the strength of the monsoon’s circulation has dwindled throughout the last three to four decades. Scientists suspect increased anthropogenic activity such as global warming and aerosol emissions may have diminished summer monsoon winds over the past few decades. 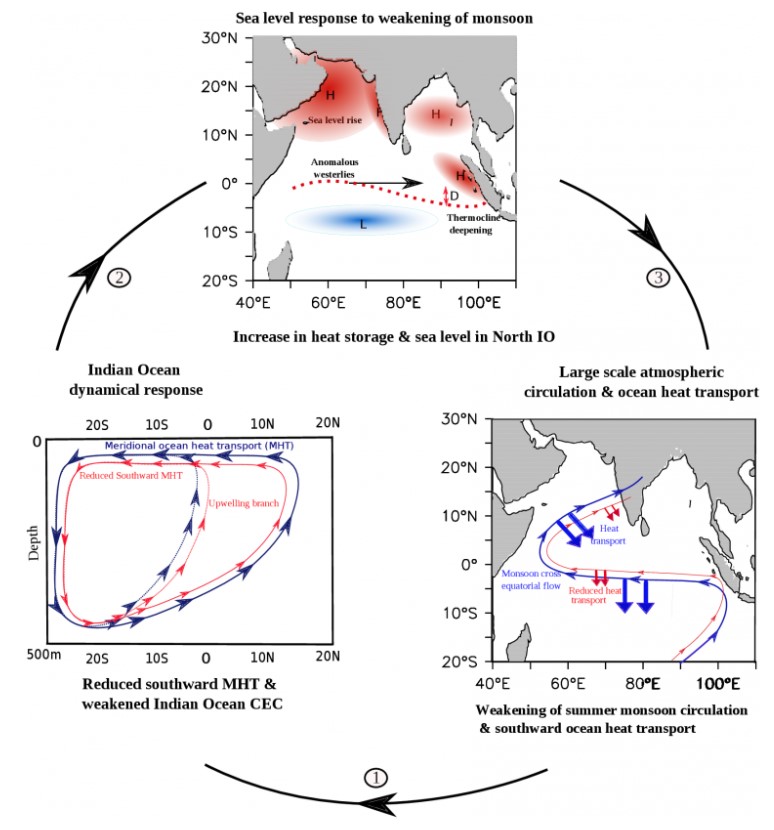 In the new study, the researchers examined monsoon circulation trends, tide gauge data and sea surface height records from the 1950s to 2016 to test their theory. They found that the intensity of the summer monsoon winds has subsided over time, indicating that monsoon circulation has weakened. Accordingly, their analysis revealed that monsoon rainfall levels have decreased as well.

The researchers also used the wind stress data to calculate how much heat was transported southward from the north Indian Ocean during the study period. They found that heat transport has decreased over time, especially since the 1970s.

From their analysis, Panickal and her colleagues conclude that the weakening monsoon circulation likely prevents heat in the north Indian Ocean from migrating southward, causing thermal sea level rise.