The map covers a two-year period from 2015 to 2017 and was created using Intermittent Small Baseline (ISBAS) analysis, a novel satellite remote sensing technique. It showed that small but significant rates of land motion are occurring across almost the entire landscape. Rural areas are marked by subsidence over peatlands and landslides on steep slopes. In contrast, the urban and industrialized areas of the Scottish Midlands clearly show the effects of historical coal mining and civil engineering.

The map was created to illustrate the problems facing governments when regulating onshore oil and gas production and storage in a modern landscape influenced by industrial and land management practices. For instance, there is a perceived threat of subsidence and a potential risk of earth tremors related to fracking – the practice of extracting oil and gas from shale rock. Although recently banned in Scotland, maps like this can help to screen locations to inform government regulators whether fracking can be reasonably monitored and deployed safely in other parts of the UK and around the world.

In addition, they can help the oil and gas industry engage with local communities to show that good practice is in place and their activities are having little effect on the environment. Alternatively, regular monitoring using satellite techniques to track the vertical motion of the ground can be used to monitor the health of peatlands and detect landslides.

Dr. Stephen Grebby, Assistant Professor in Earth Observation and lead university investigator on the project, explained the significance of the study, "Tracking ground motion is also important for a wide range of other applications such as monitoring infrastructure, and this is not just limited to Scotland. For example, our wide-area monitoring technique could be used to help identify and monitor ground instability issues along the whole stretch of the proposed HS2 route. This would provide information that could ultimately influence the plans for the final route for Phase 2 of HS2, or at least highlight existing ground instability issues that may need to be addressed during construction of the network." 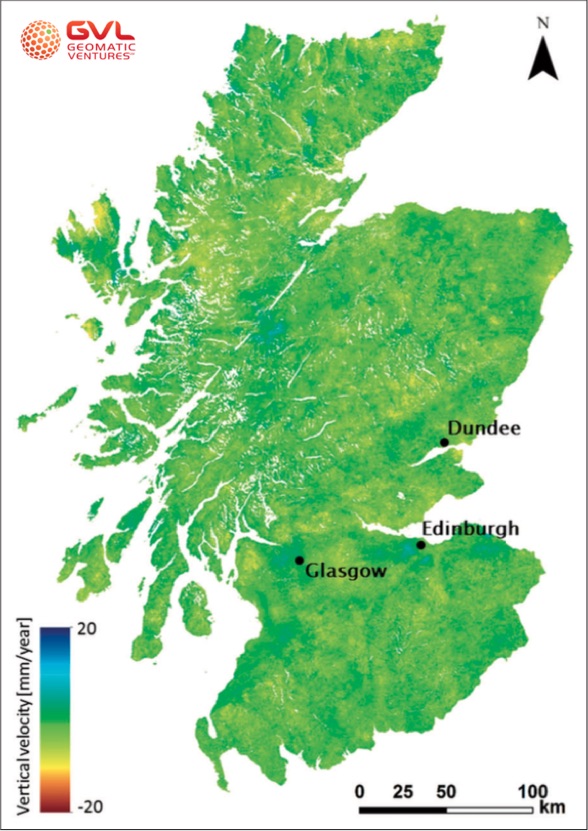 A new ground motion map of the Scottish mainland, generated by ISBAS processing of 627 Sentinel-1 IW images (some 5TB of data) acquired from 2015-2017. The map has a resolution of approx. 90m and covers more than 95% of the total land area available. Credit: Andrew Sowter (GVL)

Maps like this could, therefore, be seen as an important national asset to support risk assessment and mitigation, and consequently the design of future policies, the assessment of policy decisions and decision-making across a number of government departments.

Furthermore, this wide-area monitoring technique offers the future means of generating a European-wide relative land motion map. This would help to identify ground instabilities in urban and rural areas alike, with greater coverage than previously possible.

The current study showed that large areas of Scotland's vast lowland and highland peatland areas are dominated by subsidence. This is notable as collapsing peatlands are a significant source of greenhouse gases. According to the Scottish Natural Heritage, the carbon stored in Scotland's soils is equivalent to over 180 years of greenhouse gas emissions from Scotland at current emission rates.

Dr Andy Sowter, Chief Technology Officer of GVL, the company which processed the satellite images explained, "If Scotland is to reach its climate change targets, which are currently under scrutiny by the UK Committee on Climate Change, land motion maps like this can provide vital evidence on the health of peatlands and with regular monitoring, the beneficial effect of peatland restoration towards improving the carbon balance."

About the land motion map of Scotland

The map was produced from over 2.5TB of radar data (627 images) acquired over two years by the Sentinel-1 satellite mission, which is part of the European Union's Copernicus programme. Sentinel-1 data was downloaded for free from the European Space Agency website. The data was analyzed using the novel (patent pending) ISBAS Interferometric SAR (InSAR) method developed by the University of Nottingham, which is uniquely able to survey both rural and urban areas. The images were processed by GVL.

Provided by University of Nottingham