Irma's minimum central pressure is now 930 hPa. This is the same pressure as Hurricane "Donna" of 1960 when it made landfall in southwest Florida 57 years ago today and the same as the pressure at landfall for the Great Miami Hurricane of 1926.

Irma is moving slowly northwestward toward the lower Florida Keys near 9 km/h (6 mph). A turn toward the north-northwest with an increase in forward speed expected through late Monday.

On the current forecast track, the center of Irma is expected to cross the Lower Florida Keys during the next several hours, and then move near or along the west coast of Florida this afternoon through Monday morning (local time). Irma should then move inland over the Florida panhandle and southwestern Georgia Monday afternoon.

Irma is forecast to restrengthen a little more while it moves through the Straits of Florida and remain a powerful hurricane as it approaches the Florida Keys and the west coast of Florida. 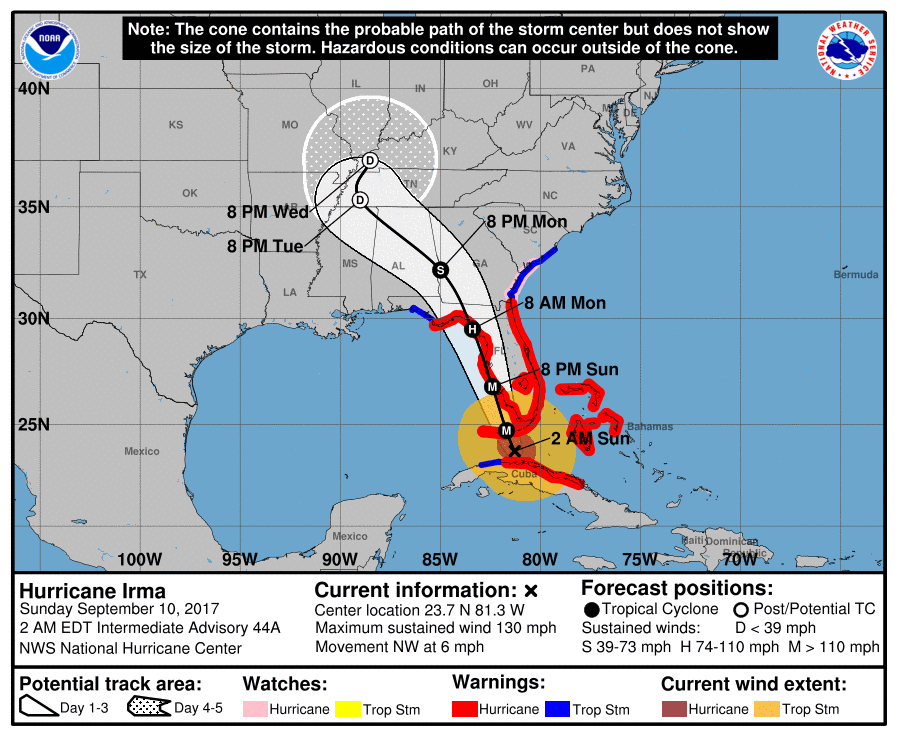 A Storm Surge Warning means there is a danger of life-threatening inundation, from rising water moving inland from the coastline, during the next 36 hours in the indicated locations. This is a life-threatening situation. Persons located within these areas should take all necessary actions to protect life and property from rising water and the potential for other dangerous conditions. Promptly follow evacuation and other instructions from local officials. 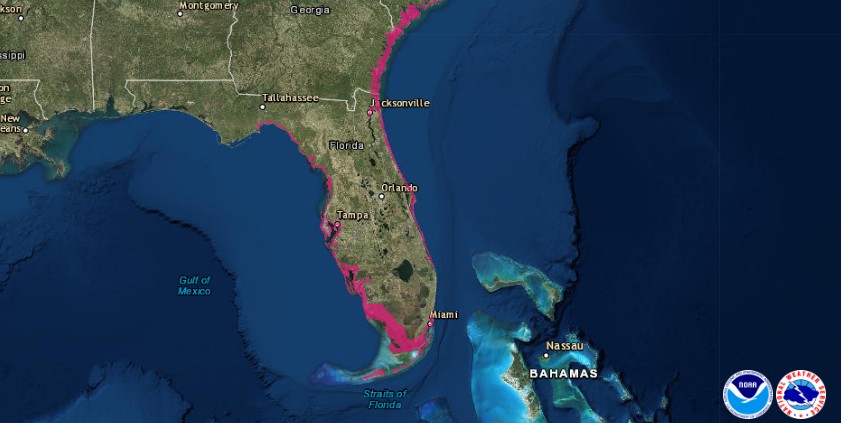 A Hurricane Warning means that hurricane conditions are expected somewhere within the warning area. Preparations to protect life and property should be rushed to completion.

The combination of a dangerous storm surge and the tide will cause normally dry areas near the coast to be flooded by rising waters moving inland from the shoreline.  The water is expected to reach the following HEIGHTS ABOVE GROUND if the peak surge occurs at the time of high tide… 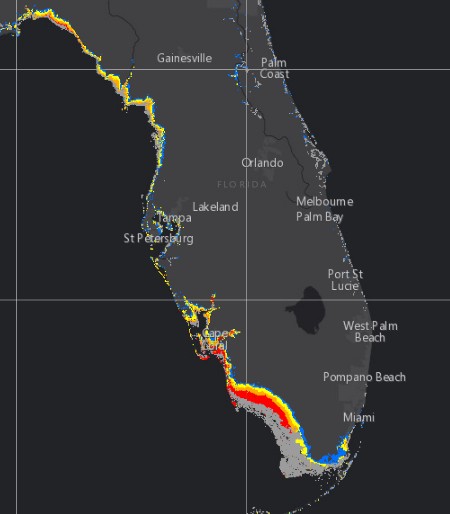 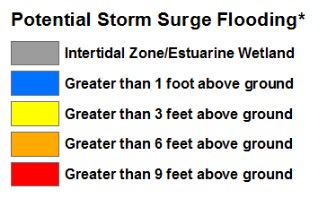 *Displayed flooding values indicate the water height that has about a 1-in-10 (10%) chance of being exceeded.

The deepest water will occur along the immediate coast in areas of onshore winds, where the surge will be accompanied by large and destructive waves.  Surge-related flooding depends on the relative timing of the surge and the tidal cycle, and can vary greatly over short distances.

The combination of a life-threatening storm surge and large breaking waves will raise water levels ABOVE NORMAL TIDE LEVELS by the following amounts within the hurricane warning area near and to the north of the center of Irma.  Near the coast, the surge will be accompanied by large and destructive waves. 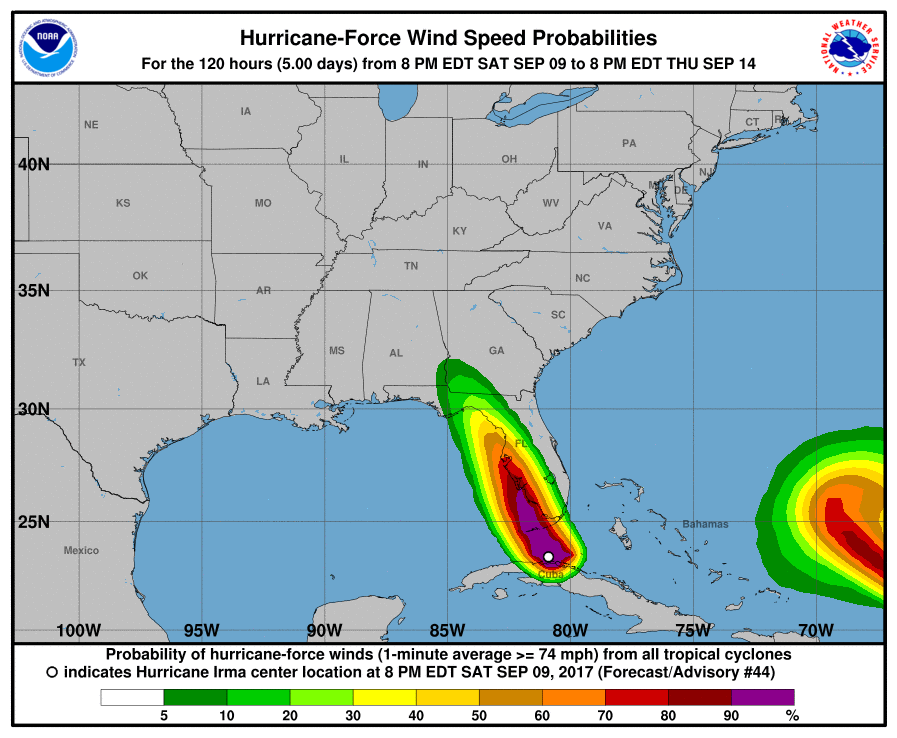 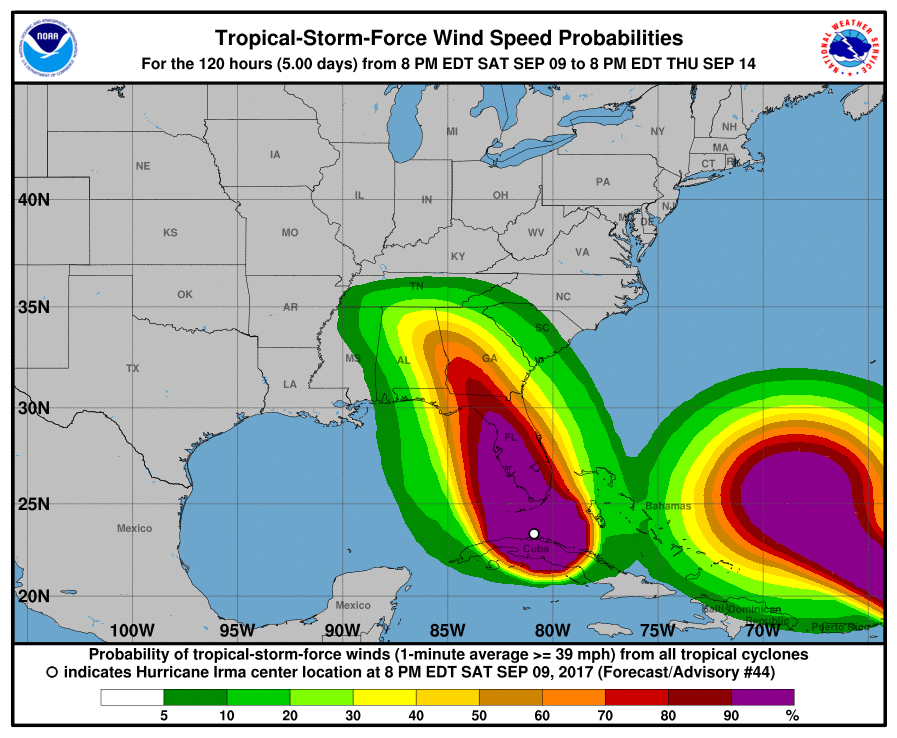 Irma is expected to produce the following rain accumulations through Wednesday:

In all areas this rainfall may cause life-threatening flash floods and, in some areas, mudslides.

A few tornadoes are possible through Sunday night, mainly across southern, central, and eastern portions of the Florida peninsula.

Do not venture outside when the calm eye of the hurricane passes over, as dangerous winds will return very quickly when the eye moves away.

Swells generated by Irma are affecting the southeast coast of the United States. These swells are likely to cause life-threatening surf and rip current conditions.

There are numerous videos with live coverage out there. Below are just some of them, including live cameras.

More than 850 000 people in Florida are without power.

Irma is moving NNW at 13 km/h (8 mph) with the minimum estimated central pressure of 929 hPa.

Irma is impacting all of South Florida for the past two hours.

On the forecast track, the center of Irma should move near or over the southwest and west coast of the Florida Peninsula later today (local time) through tonight. It should then move inland over northern Florida and southwestern Georgia Monday afternoon. 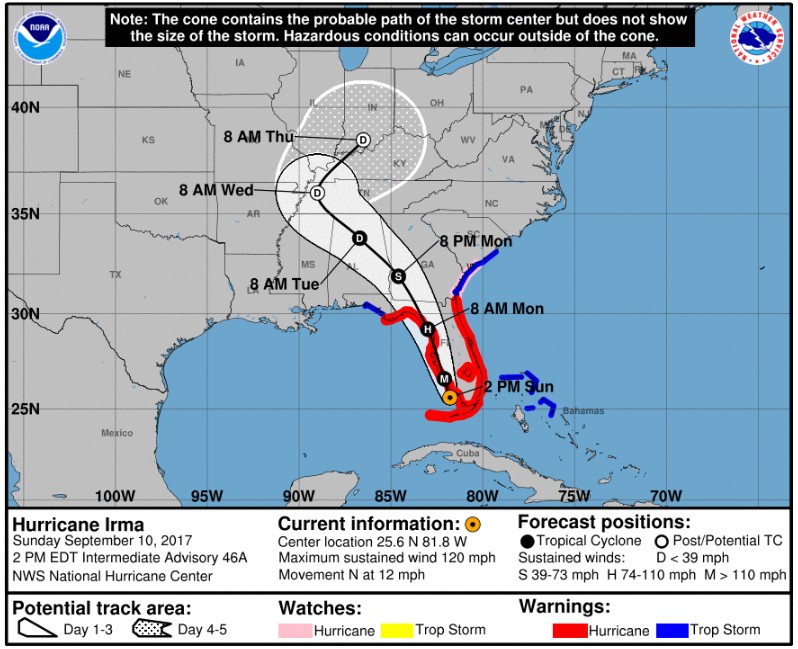 This update is based strictly on multimedia collected on Twitter.

At least 3.5 million people across Florida are without power.

A historic warning – first-ever Tropical Storm Warning – was issued for Atlanta. Governor Nathan Deal has expanded an emergency declaration to include all 159 counties in Georgia.

A turn toward the northwest at a faster forward speed is expected during the next day or so.  On the forecast track, the center of Irma will continue to move over the western Florida peninsula through this morning and then into the southeastern United States late today and Tuesday.

Additional weakening is forecast, and Irma is expected to become a tropical storm over far northern Florida or southern Georgia later today.

Irma weakened to a tropical storm but is still producing some wind gusts to near hurricane force.

The center of Tropical Storm "Irma" is moving through Georgia and is expected to continue moving through the state tonight (local time) and move into Alabama on Tuesday, September 12.

Irma is now blamed for the deaths of 7 people in the United States, 10 in Cuba, 11 in St Martin-St Maarten-St Barth, 1 in Anguilla and 4 in the British Virgin Islands.

Some 6.3 million people in Florida are without power and almost 1.3 million in Georgia.

Irma has degenerated into a remnant low.

It is now blamed for the deaths of 22 people in the United States.