Scientists on board NIWA’s research vessel Ikatere took to the water in January with state-of-the-art equipment to map the sea floor between Cape Campbell and Spyglass Point to the south of Kaikoura and added more fault ruptures to the fault map of November’s magnitude 7.8 Kaikoura earthquake.

The scientists discovered a previously unknown fault in the seabed about 10 km (6.2 miles) north east of Kaikoura Peninsula. This new fault has been named the Point Kean Fault after Point Kean at the tip of the peninsula. While it is not clear how much this fault moved during the earthquake, it is likely to be the fault responsible for the uplift around Kaikoura Peninsula.

To the north, the Papatea Fault rupture leaves land and breaks into a complex network of seafloor scarps up to 6 meters (20 feet) high continuing for about 5 km (3.1 miles) offshore. 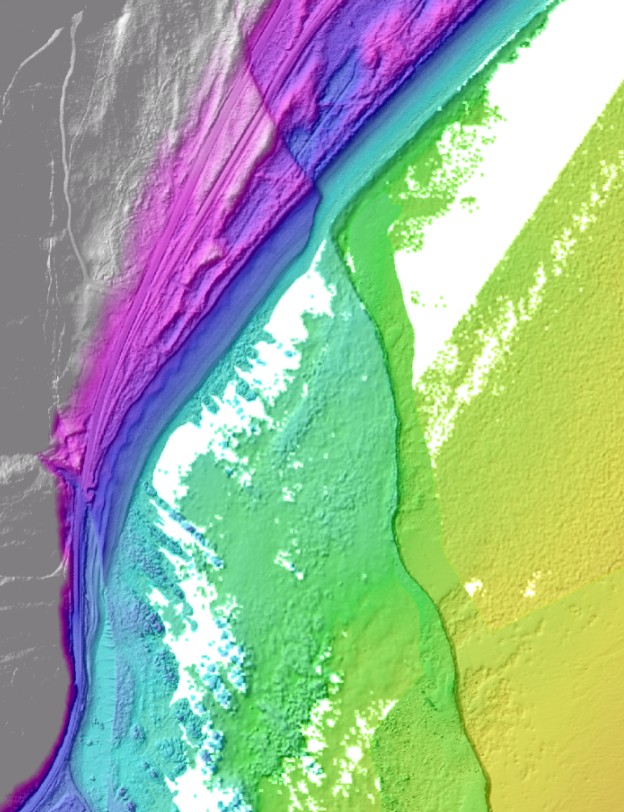 The Papatea Fault where it heads offshore – the grey, pink and purple are above sea level, and the turquoise and green are below. Credit: NZTA/NIWA

While movement on the Needles Fault had been detected by scientists on board Tangaroa shortly after the earthquake, Ikatere was able to map it in more detail. Rupture along the fault was traced along the seabed for a total of 34 km (21 miles), from Cape Campbell in the north to where it connects up with the onshore Kekerengu Fault in the south.

The southern-most offshore fault, the Hundalee Fault, was mapped from where it enters the sea at Oaro to near the head of Kaikoura Canyon. Comparing the bathymetry data here to pre-earthquake data from 2013 shows a clear 2 meter (6.5 feet) high scarp formed in the seabed, but it doesn’t appear to go all the way into the canyon.

As well as mapping fault scarps, the NIWA scientists also mapped the seabed in the Kaikoura Canyon, just to the south of Kaikoura Peninsula, to determine any changes to its shape.  Comparing this new data to the 2013 data reveals that huge amounts of mud have been shaken from the top of the canyon – more than 1 000 landslide scars have been mapped along 30 km (18.6 miles) of canyon rim. This mud tumbled down into the canyon floor and flowed over 350 km (217 miles) along the deep sea Hikurangi Channel, wiping out everything in its path. You can read more about the impact of these mudslides on the Canyon ecosystem on the NIWA website. 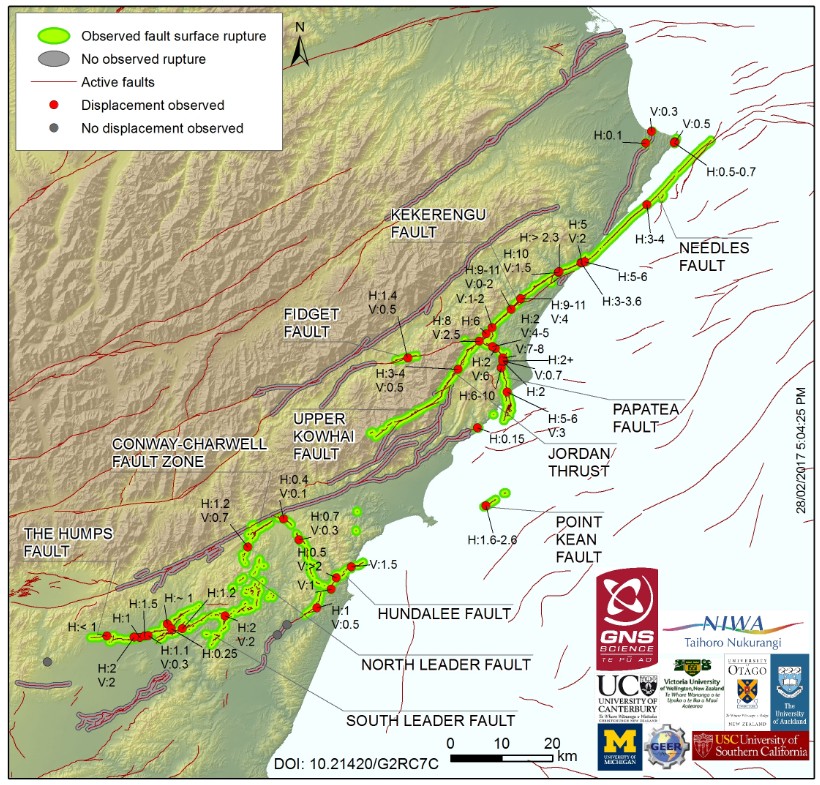 Two new surface ruptures have also been discovered after analyzing the lidar data along the coast to the north of Kaikoura – one north of the Kekerengu Fault at Tinline Downs and one crossing Papatea Point.  There’s lots more lidar to come, so geologists could yet discover more small surface ruptures like these that can be hard to see in the field.