In the past 7 years, meteorites have made at least 222 impact craters on the surface of the Moon which is 33% more than predicted, according to a new study published this week in Nature. The work is considered a significant advance in the field of crater chronology.

"It's just something that's happening all the time," said Emerson Speyerer, an engineer at Arizona State University and lead author of the new paper.

Along with the fresh craters, Speyerer's team found more than 47 000 ‘splotches’, formed when material gets kicked up by the main impact and rains down — sometimes tens of kilometers away. 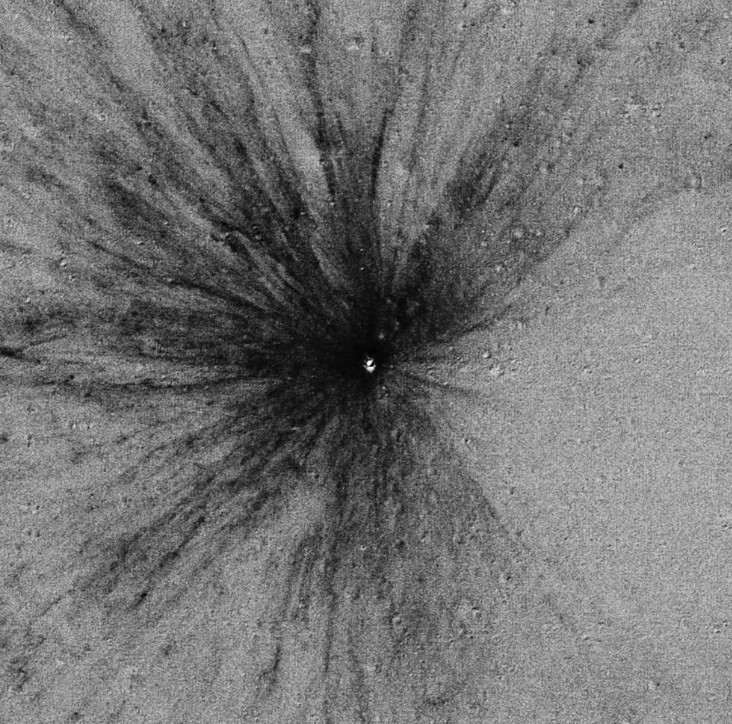 Temporal ratio image formed from two LROC Narrow Angle Camera images (after image divided by the before image) revealing a new 12 meter (~40 foot) diameter impact crater (Latitude: 36.536°N; Longitude: 12.379°E) formed between October 25, 2012 and April 21, 2013, scene is 1300 meters (~4200 feet) wide. New crater and its continuous ejecta are seen as the small bright area in the center, dark areas are the result of material blasted out of the crater to distances much further than previously thought. Credits: NASA/GSFC/Arizona State University

"That means a bigger risk for any future lunar habitats," says Stephanie Werner, a planetary geologist at the University of Oslo. The chances of a lunar base being nailed by a direct meteorite hit are relatively small, but the splattered material could pose a hazard, she explained.

Speyerer's team used Lunar Reconnaissance Orbiter Camera (LROC) Narrow Angle Camera (NAC) temporal (‘before and after’) image pairs to quantify the contemporary rate of crater production on the Moon, to reveal previously unknown details of impact-induced jetting, and to identify a secondary impact process that is rapidly churning the regolith.

"From this temporal dataset, we detected 222 new impact craters and found 33% more craters (with diameters of at least ten meters [32.8 feet]) than predicted by the standard Neukum production and chronology functions for the Moon," authors said in the abstract of the paper.

The team has identified broad reflectance zones associated with the new craters and interpreted them as evidence of a surface-bound jetting process.

"We also observe a secondary cratering process that we estimate churns the top two centimeters [0.8 inches] of regolith on a timescale of 81 000 years – more than a hundred times faster than previous models estimated from meteoritic impacts (ten million years)."