Earth is embedded in the always-expanding atmosphere of the Sun, called the solar wind, which blows past planets to the edge of the Solar System. Solar wind is typically supersonic, faster than the speed of sound, and when it encounters planets, like Earth, a shock wave is created that slows the wind down and deflects it around the planet.

However, during the unusual episode, which was caused by the passage of a solar eruption over Earth on January 17, 2013, the data recorded by satellites showed the solar wind became subsonic, or slower than the speed of sound.

During this interval is when the researchers recorded measurements of the Van Allen radiations belts, and found that the outer belt was not as calm as expected.

Two unusual phenomena occurred; a long-lasting electron drop in the Earth’s radiation belts and large oscillations in the magnetic field.

The research was conducted by scientists from the University of New Hampshire and published recently in Nature Communications.

The team used data from more than 10 spacecrafts, including information from a UNH-led instrument on board NASA's Van Allen Probes twin satellites, to get measurements of both the Earth’s inner and outer Van Allen radiation belts. 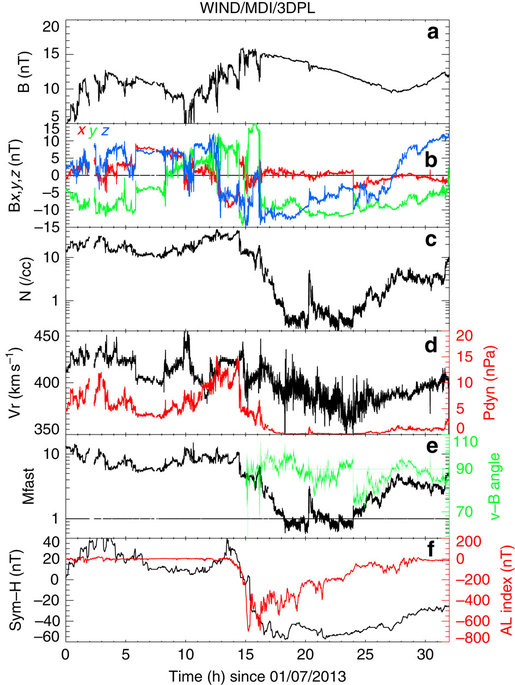 The panels show the total magnetic field (a), the magnetic field components in GSM coordinates (b; x component in red, y component in green and z component in blue), the number density (c), the radial velocity and dynamic pressure (in red; d) (d), the fast magnetosonic Mach number and angle between the magnetic field and velocity vectors (in green; e), the Sym-H index and the AL index (in red; f). The Sym-H is a 1-minute index which characterizes the disturbance of mid-latitude geomagnetic field, whereas the AL is a 1-minute index which characterizes the auroral activity in the northern hemisphere. The dense sheath preceding the magnetic ejecta starts around 00:00 UTC on January 17, the ejecta at 16:00 and the sub-fast period from 18:15 to 23:50 UTC, except for a 30-minute period of Mach ∼2 centered around 20:30 UTC.

The results revealed valuable information of unexpected and dramatic changes in the radiation belts allowing scientists to explore the effect of similar conditions around other Earth-like planets at other stars.

“What makes this very exciting is that this type of interaction between the Sun and a planet rarely happens for Earth but it’s believed to be a frequent occurrence for other Earth-like extrasolar planets,” said Noé Lugaz, a research associate professor at UNH’s Institute for the Study of Earth, Oceans, and Space (EOS), and lead author of the study.

“Since the closest of these extrasolar planets is several light years away, these measurements help give us a sense of the radiation conditions that might be occurring around some of those distant worlds, that will never be visited in our lifetime.”

When the Van Allen belts were first discovered in the 1950s they were thought to be relatively stable structures, but subsequent observations have shown they are dynamic and mysterious.

Unlocking these mysteries could be valuable for newer technologies like telecommunication and GPS satellites which spend most of their time in the Van Allen belts.