Van Allen radiation belts have been found to contain a nearly impenetrable barrier that prevents the fastest, most energetic electrons from reaching Earth.

The Van Allen belts are a collection of charged particles, gathered in place by Earth’s magnetic field. They can wax and wane in response to incoming energy from the Sun, sometimes swelling up enough to expose satellites in low-Earth orbit to damaging radiation. The discovery of the drain that acts as a barrier within the belts was made using NASA's Van Allen Probes, launched in August 2012 to study the region. A paper on these results appeared in the November 27, 2014, issue of Nature magazine.

Dan Baker, a space scientist at the University of Colorado in Boulder and first author of the newly released paper said this barrier for the ultra-fast electrons is a remarkable feature of the belts. "We're able to study it for the first time, because we never had such accurate measurements of these high-energy electrons before."

Understanding what gives the radiation belts their shape and what can affect the way they swell or shrink helps scientists predict the onset of those changes. Such predictions can help scientists protect satellites in the area from the radiation. 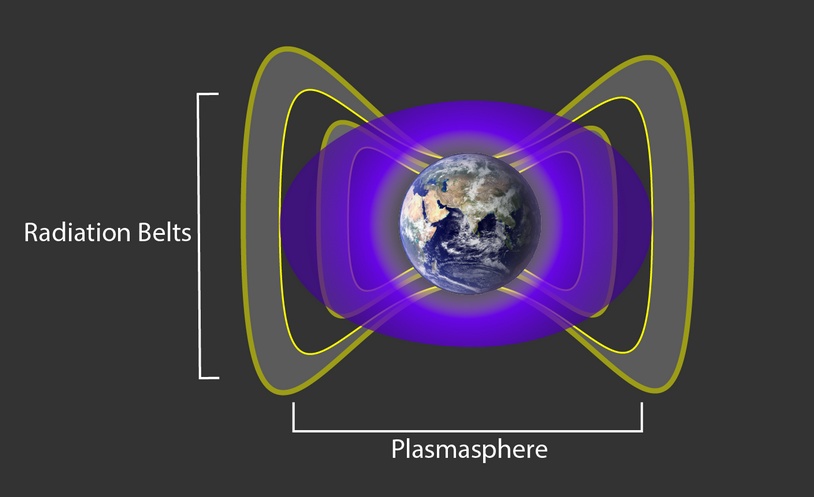 A cloud of cold, charged gas around Earth, called the plasmasphere and seen here in purple, interacts with the particles in Earth's radiation belts — shown in grey— to create an impenetrable barrier that blocks the fastest electrons from moving in closer to our planet. Image credit: NASA/Goddard

A slot of fairly empty space typically separates the belts. But, what keeps them separate? Why is there a region in between the belts with no electrons?

Enter the newly discovered barrier. The Van Allen Probes data show that the inner edge of the outer belt is, in fact, highly pronounced. For the fastest, highest-energy electrons, this edge is a sharp boundary that, under normal circumstances, the electrons simply cannot penetrate.

"When you look at really energetic electrons, they can only come to within a certain distance from Earth," said Shri Kanekal, the deputy mission scientist for the Van Allen Probes at NASA's Goddard Space Flight Center in Greenbelt, Maryland and a co-author on the Nature paper. "This is completely new. We certainly didn't expect that."

The team looked at possible causes. They determined that human-generated transmissions were not the cause of the barrier. They also looked at physical causes. Could the very shape of the magnetic field surrounding Earth cause the boundary? Scientists studied but eliminated that possibility. What about the presence of other space particles? This appears to be a more likely cause.

This animated gif shows how particles move through Earth’s radiation belts, the large donuts around Earth. The sphere in the middle shows a cloud of colder material called the plasmasphere. New research shows that the plasmasphere helps keep fast electrons from the radiation belts away from Earth. Image credit: NASA/Goddard/Scientific Visualization Studio

This scattering effect is fairly weak and might not be enough to keep the electrons at the boundary in place, except for a quirk of geometry: The radiation belt electrons move incredibly quickly, but not toward Earth. Instead, they move in giant loops around Earth. The Van Allen Probes data show that in the direction toward Earth, the most energetic electrons have very little motion at all – just a gentle, slow drift that occurs over the course of months. This is a movement so slow and weak that it can be rebuffed by the scattering caused by the plasmasphere.

This also helps explain why – under extreme conditions, when an especially strong solar wind or a giant solar eruption such as a Coronal Mass Ejection sends clouds of material into near-Earth space – the electrons from the outer belt can be pushed into the usually-empty slot region between the belts.

"The scattering due to the plasmapause is strong enough to create a wall at the inner edge of the outer Van Allen Belt," said Baker. "But a strong solar wind event causes the plasmasphere boundary to move inward."

A massive inflow of matter from the Sun can erode the outer plasmasphere, moving its boundaries inward and allowing electrons from the radiation belts the room to move further inward too.

For more information about the Van Allen Probe, visit: www.nasa.gov/vanallenprobes