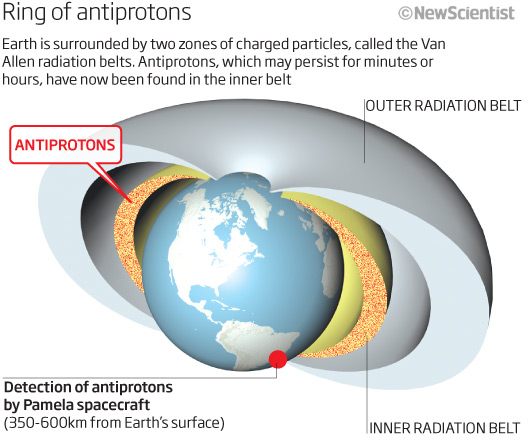 Antiprotons appear to ring the Earth, confined by the planet's magnetic field lines. The antimatter, which may persist for minutes or hours before annihilating with normal matter, could in theory be used to fuel ultra-efficient rockets of the future.

Charged particles called cosmic rays constantly rain in from space, creating a spray of new particles – including antiparticles – when they collide with particles in the atmosphere. Many of these become trapped inside the Van Allen radiation belts, two doughnut-shaped zones around the planet where charged particles spiral around the Earth's magnetic field lines.

Satellites had already discovered positrons – the antimatter partners of electrons – in the radiation belts. Now a spacecraft has detected antiprotons, which are nearly 2000 times as massive.

Heavier particles take wider paths when they spiral around the planet's magnetic lines, and weaker magnetic field lines also lead to wider spirals. So relatively heavy antiprotons travelling around the weak field lines in the outer radiation belt were expected to take loops so big they would quickly get pulled into the lower atmosphere, where they would annihilate with normal matter. The inner belt was thought to have fields strong enough to trap antiprotons, and indeed that is where they have been found.

Piergiorgio Picozza from the University of Rome Tor Vergata, Italy, and colleagues detected the antiprotons using PAMELA, a cosmic-ray detector attached to a Russian Earth-observation satellite. The spacecraft flies through the Earth's inner radiation belt over the south Atlantic.

PAMELA samples only a small part of the inner radiation belt, but antiprotons are probably trapped throughout it.

"I find it very interesting to note that the Earth's magnetic field works a little bit like the magnetic traps that we are using in the lab," says Rolf Landua at the CERN particle physics laboratory near Geneva, Switzerland. There, researchers have been trying to trap antimatter for ever longer periods to compare its behaviour with that of normal matter.

Read the rest at: NewScientist