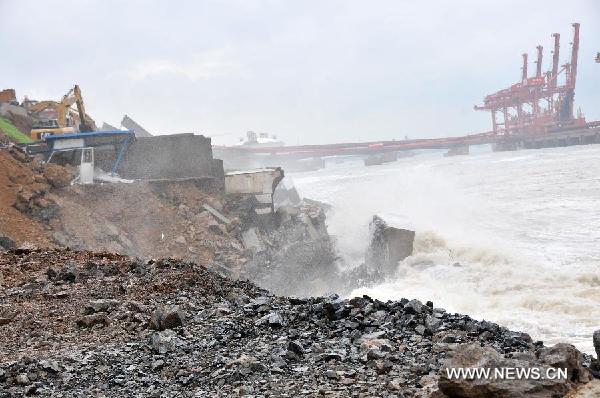 Twenty-meter-high waves, spawned by tropical storm Muifa off the coast of north Liaoning Province, broke a dike in the Jinshan Industrial Zone in the city of Dalian Monday morning, threatening to hit the Fujia chemical plant just 50 meters behind the dike, said a spokesman with the emergency response headquarters.

China said Monday it had temporarily averted a toxic chemical spill at a plant on its northeast coast, but remained on alert as a tropical storm that has killed three people in South Korea approached.

Workers managed to repair a dyke protecting a chemical plant after it was breached by high waves in the province of Liaoning, which has been lashed by torrential rain as the storm nears. Residents near the Fujia Group plant in the port city of Dalian had been evacuated as a precaution, the state Xinhua news agency said in a report confirmed by an official with the Liaoning border police. Workers were continuing to dump rocks and concrete onto the dyke breaches to make sure water did not gush through again.

Authorities did not say which chemicals had been in danger of spilling from the plant, which makes paraxylene – a flammable, carcinogenic liquid used in the production of polyester films and fabrics.

Torrential downpours and high winds unleashed by Muifa -which was a typhoon before it gradually weakened to a tropical storm – have already wreaked havoc in China and in neighbouring South Korea. Muifa drenched Shanghai over the weekend, triggering hundreds of flight cancellations and prompting authorities to call fishing boats back to port.

US oil giant ConocoPhillips was also forced to suspend clean-up operations on a two-month-old oil spill in Bohai Bay off the coast of Shandong due to Muifa, the firm said in a statement. 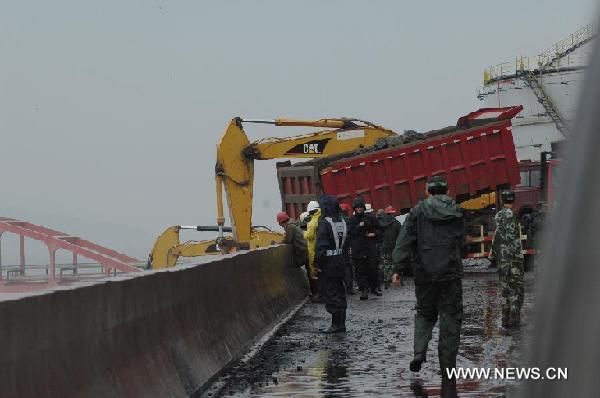 Authorities in Dandong, a border city in Liaoning, have set up more than 750 temporary shelters that are capable of accommodating more than one million people in anticipation of the storm, Xinhua reported. The city stands on the border with North Korea, which is still reeling from summer rains and floods that have killed 30 people, destroyed more than 6,750 houses and inundated more than 48,000 hectares (120,000 acres) of farmland.

But so far, the storm has not caused as much damage as initially feared. Authorities had expressed concern that Muifa could cause destruction similar to that unleashed by Typhoon Saomai in 2006, which was the worst to hit China in 50 years and killed at least 450 people. (TerraDaily)