Scientists have made another step toward determining how solar flares accelerate charged particles like electrons and protons to speeds of almost the order of light. The new capabilities of the National Science Foundation's Karl G. Jansky Very Large Array (VLA) radio telescope enabled the advance, the Harvard Smithsonian Center for Astrophysics announced on December 3, 2015.

Solar flares are the most powerful explosions occurring in our Solar System, capable of pushing the charged particles to almost light speeds. The mechanism of how this is achieved has so far remained unexplained.

"It has been thought that a specific type of shock produced by solar flares could be responsible for accelerating these particles, but there has been no convincing observational evidence for this mechanism. Now, using the raw power of the upgraded VLA, we have a fundamentally new result that strongly supports this theoretical scenario," said first author of the study, Bin Chen, of the Harvard-Smithsonian Center for Astrophysics (CfA). 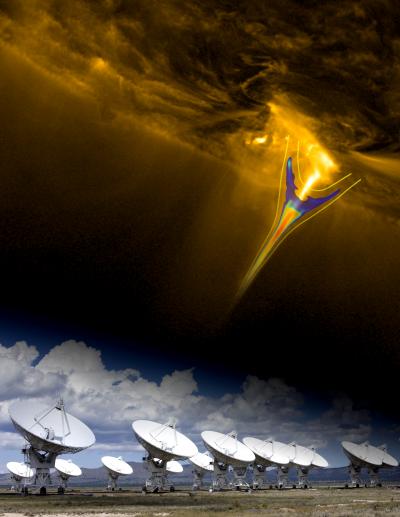 This image shows the speed of fast plasma outflows produced by the flare. The termination shock is shown as a transition layer where the colors change abruptly from red/yellow to blue/green. At bottom is the Karl G. Jansky Very Large Array, which captured the termination shock in action using radio observations. Image credit: SDO/AIA data is from NASA. VLA image courtesy of NRAO/AUI. Image prepared by Chen, Jibben, and Samra.

Solar flares are probably produced by a sudden energy release from churned and tangled magnetic fields in the Sun's atmosphere. When they explode, massive energy amounts get released and magnetic fields reconfigure themselves again in the magnetic re-connection process. The mechanism of how this energy release induces such high speed particle flows puzzled the astronomers. 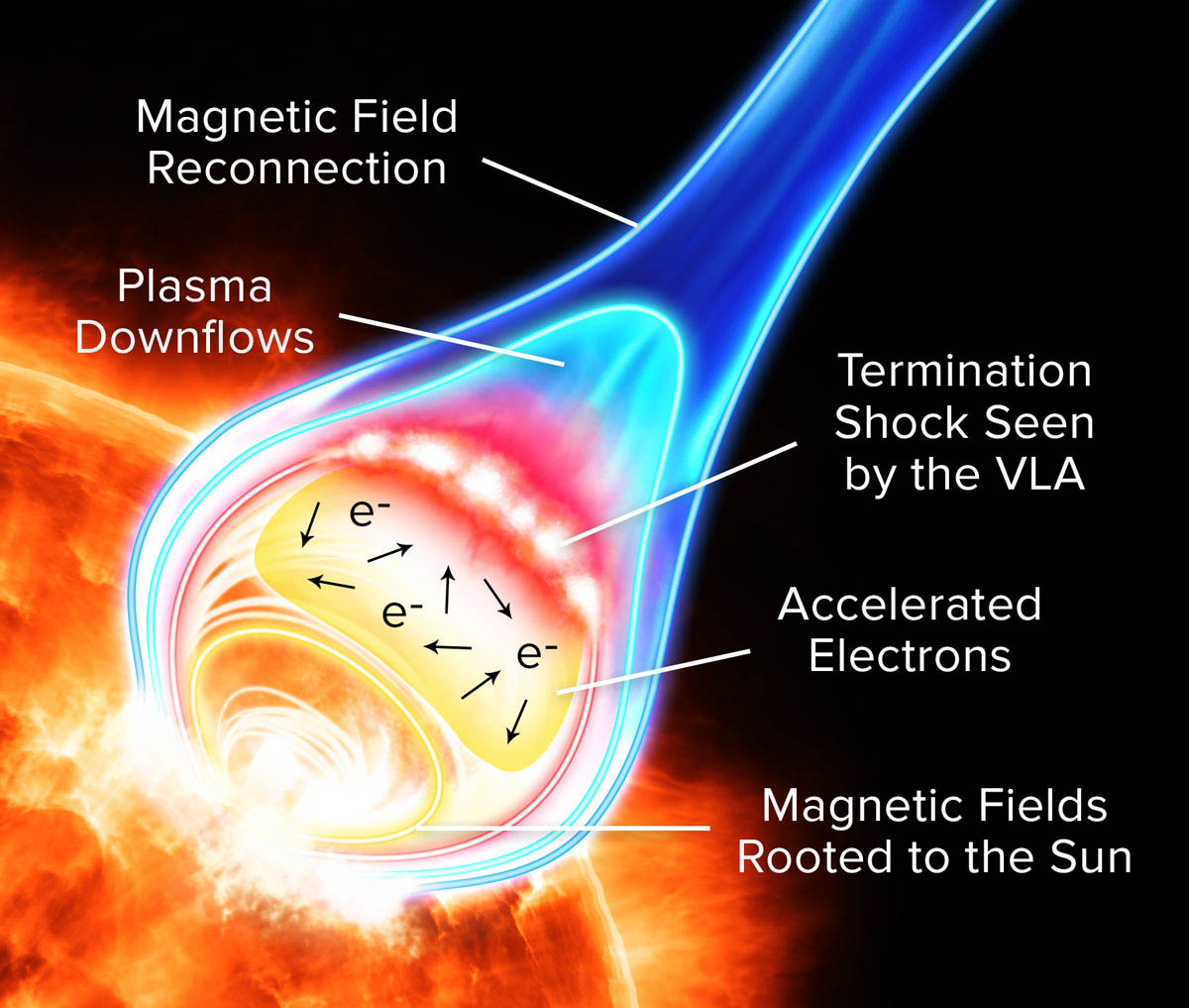 According to newest observations, the acceleration of charged particles happens in a region of the flare where rapidly flowing solar gases impinge on dense magnetic field loops. During this process, a strong shock, the so-called "termination shock" is generated. It pushes the particles into super high speeds. The VLA observations of the shock phenomena seems to match the proposed computer simulation describing the occurrence.

The VLA telescope is capable of observing the Sun in a broad range of radio frequencies within time intervals of 50 miliseconds and producing over 40 000 individual radio images during one second of observation. VLA in combination with other ultraviolet and X-ray telescopes was used by the scientist to study a flare eruptions of March 3, 2012.

The research revealed that short-lived radio waves outbursts were generated by the energetic electrons, occurred where the termination shock was forecast by the computer simulation.

"These new insights are a significant step forward in our understanding of particle acceleration, which is not only an important aspect of solar flares, but also a fundamental physical process occurring throughout the Universe," Chengcai Shen, a researcher at the CfA said.

Featured image: This image shows the speed of fast plasma outflows produced by the flare. The termination shock is shown as a transition layer where the colors change abruptly from red/yellow to blue/green. Image credit: SDO/AIA data is from NASA. VLA image courtesy of NRAO/AUI. Image prepared by Chen, Jibben, and Samra.