“Understanding interaction between the Earth’s magnetic field, or magnetosphere, and its upper atmosphere – known as the thermosphere/ionosphere – is especially important this year and in 2014, said Yue Deng, an assistant physics professor at University of Texas. “That’s when the Sun is predicted to reach a time of heightened activity or its “solar max.”

“Right now, estimation of the amount of energy entering the Earth’s thermosphere is not very precise and can be underestimated by 100 percent. We know even less about how that energy is distributed,” Deng said. “This information is critical because if you put the same amount of energy at 400 kilometers the impact can be 100 times larger than if you put it at 100 kilometers.”

Deng received a $408,000, three-year award from NASA’s heliophysics division in January 2013. She is co-developer of a new 3-D Global Ionosphere-Thermosphere Model, or GITM. Deng also is the 2010 recipient of a National Science Foundation Early Career Development or CAREER award.

The team plans to use the grant to integrate information from several different scientific models and the COSMIC satellite program. They will create a more comprehensive model of how conductivity is distributed through altitudes. The research also will explore the role that Joule heating, or friction heating, and charged particles in the ionosphere play in energy distribution. COSMIC is a joint Taiwan/United States science mission for weather, climate, space weather and geodetic research that is entering its sixth year.

“Dr. Deng is a young professor who is already making a valuable contribution to her field, and the NASA award recognizes that,” said Pamela Jansma, dean of the UT Arlington College of Science. “By helping the physics community better understand the role that space weather phenomenon has on Earth, she is creating a vital new tool.” 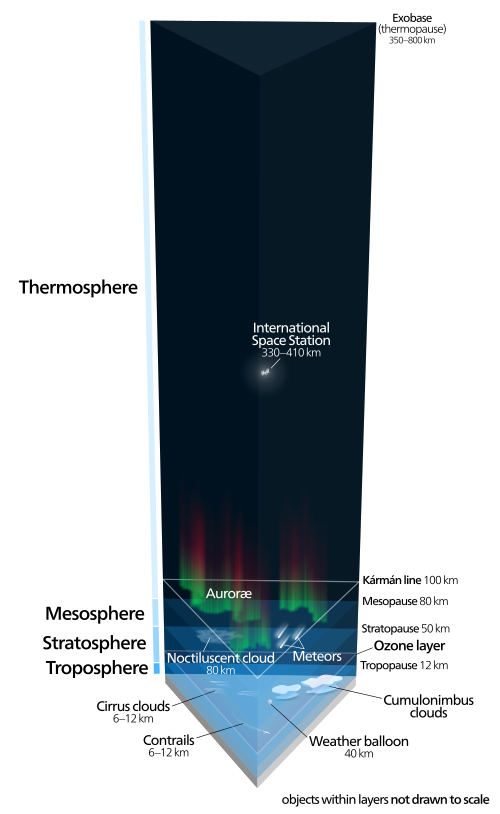 Triangular prism ovair. The layers of the atmosphere are drawn to precise scale. Objects within them, such as the weather balloon are not. Author: Kelvinsong

Co-investigators on the new NASA grant include Arthur Richmond, a senior scientist at the High Altitude Observatory of The National Center for Atmospheric Research (NCAR), and Delores Knipp, a visiting professor at the University of Colorado at Boulder.

Solar wind is plasma from the Sun that travels through space at about 400 kilometers per second carrying with it a magnetic field. Usually, the Earth’s magnetic field protects it from this plasma radiation. Solar flares and other activity on the Sun’s surface can increase the energy traveling toward Earth, with some of the radiation passing through the magnetosphere at the Earth’s magnetic poles.

Energy entering the thermosphere/ionosphere after a solar storm can wreak havoc on scientists’ ability to track the satellites that orbit the Earth in that region, anywhere from about 100 to 500 kilometers above the ground. For example, a solar storm in March 1989 caused trackers to temporarily lose about 1,000 satellites, Deng said. Most were later recovered.

Energy bursts from solar flares, coronal mass ejections and similar phenomenon can also disrupt energy distribution systems on Earth, communication technology and affect airline activity. Efforts like the NOAA/NWS Space Weather Prediction Center have been established to give warnings about upcoming disturbances, so scientists can protect equipment and minimize the damage. But, better information is needed, Deng said.