A large portion of the Middle East lost freshwater reserves rapidly during the past decade. New data revealed already an arid region of Tigris-Euphrates Basin, which grows even drier due to human consumption of water for drinking and agriculture. The research team observed the Tigris and Euphrates river basins – including parts of Turkey, Syria, Iraq and Iran, and found that 144 cubic kilometers (117 million acre feet) of fresh water was lost from 2003 to 2009 – the roughly equivalent to the volume of the Dead Sea. About 60%  of the loss was attributed to the pumping of groundwater from underground reservoirs. When a drought shrinks the available surface water supply, irrigators and others turn to groundwater.

The team led by Jay Famiglietti and Kate Voss of the University of California–Irvine (UCI) and Georgetown University with other researchers from NASA’s Goddard Space Flight Center and the National Center for Atmospheric Research, used data acquired by twin gravity-measuring satellites of the Gravity Recovery and Climate Experiment (GRACE).

According to Jay Famiglietti, GRACE data show an alarming rate of decrease in total water storage in the Tigris and Euphrates river basins, which currently have the second fastest rate of groundwater storage loss on Earth, after India. The rate was especially striking after the 2007 drought. Meanwhile, demand for freshwater continues to rise, and the region does not coordinate its water management because of different interpretations of international laws.

This images were acquired by the Landsat 5 satellite and show the shrinking of the Qadisiyah Reservoir in Iraq between September 7, 2006 and September 15, 2009.  (NASA images by Robert Simmon, using Landsat data/EarthObservatory) 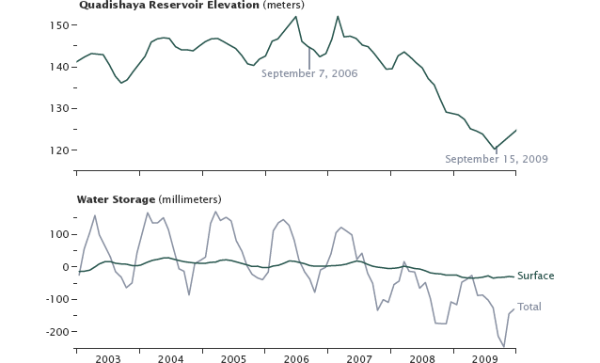 The first graph shows the elevation of the water in that reservoir between January 2003 and December 2009. The elevation is a proxy measurement for the total volume of water stored there; labels show the water elevation at the time of the satellite images. The second graph shows the water storage for the entire study area as measured by GRACE in the same period. The gray line depicts total water storage in the region—groundwater, surface water bodies, and soil moisture—while the green line depicts changes in surface water. The difference between those two lines reflects the change in water stored in underground aquifers (ground water).  ( Graphs based on data from the UC Center for Hydrologic Modeling. Caption by Mike Carlowicz based on texts from the Jet Propulsion Laboratory, American Geophysical Union, and the University of California–Irvine.)

GRACE data show a seasonal fluctuation of total water storage, and also an overall downward trend, suggesting that groundwater is being pumped and used faster than natural processes can replenish it. Within any given region on Earth, rising or falling water reserves alter the planet’s mass, influencing the gravity field of the area. GRACE satellites tells us how water storage changes over time by periodically measuring gravity in each region.

The researchers calculated that about one-fifth of the water losses in their Tigris-Euphrates study region came from snowpack shrinking and soil drying up, partly in response to a 2007 drought. Another fifth of the losses is caused by loss of surface water from lakes and reservoirs. The majority of the loss—approximately 73 million acre feet (90 cubic kilometers)—was due to reductions in groundwater. According to  Jay Famiglietti, principal investigator of the study, that’s enough water to meet the needs of tens of millions to more than a hundred million people in the region each year, depending on regional water-use standards and availability. 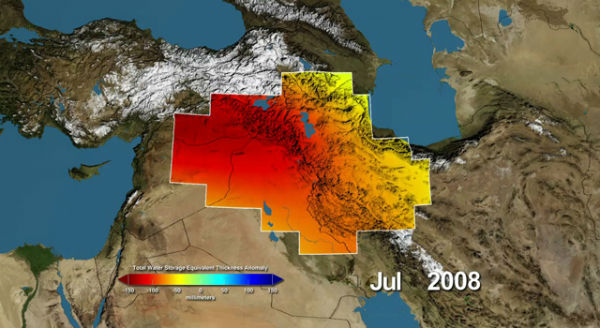 Variations in total water storage from normal, in millimeters, in the Tigris and Euphrates river basins, as measured by NASA’s Gravity Recovery and Climate Experiment (GRACE) satellites, from January 2003 through December 2009. Reds represent drier conditions, while blues represent wetter conditions. The majority of the water lost was due to reductions in groundwater caused by human activities. By periodically measuring gravity regionally, GRACE tells scientists how much water storage changes over time. (Credit: NASA/UC Irvine/NCAR)

The 754,000-square-kilometer (291,000-square-miles) Tigris and Euphrates basin jumped out as a hotspot when UC Irvine researchers looked at the global water ups and down. Within the seven-year period of GRACE data, researchers calculated that water storage in the region shrunk by an average of 20 cubic km (16 million acre feet) a year. This rate of water loss is among the largest liquid freshwater losses on the continents. Meanwhile, the region’s demand for fresh water is rising.

“They just do not have that much water to begin with, and they’re in a part of the world that will be experiencing less rainfall with climate change. Those dry areas are getting dryer,” Famiglietti said. “They and everyone else in the world’s arid regions need to manage their available water resources as best they can.”

The Gravity of Water