A new study conducted by a team of scientists from the Massachusetts Institute of Technology (MIT) shows the South Asian summer monsoon wind complex has changed considerably, due to the presence of manmade aerosols in atmosphere.

A widespread burning of firewood, coal, agricultural waste and biomass across India has caused the black carbon particles to disperse in the Earth's atmosphere. These human made aerosol particles form the so-called "atmospheric brown cloud" responsible for disrupting the local climate and polluting the air. 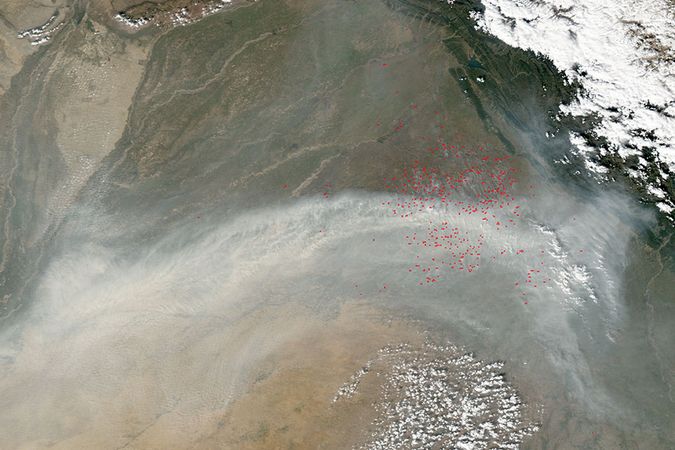 An atmospheric brown cloud of manmade aerosols produced by agricultural (marked in red) and other fires are shown to be capable of reducing monsoon related rainfall and crop yields in central India. Image credit: Jesse Allen, NASA Earth Observatory

South Asian summer monsoon winds bring rain from the tropical Indian Ocean across the region, mostly to the areas in southwest and northeast. The aerosols block the radiation coming from the sun thus cooling the ground before getting swept away by rain, strongly affecting the monsoon in the process.

"Aerosols can influence the supply of moisture, and a small perturbation can play a big role. Pre-monsoonal aerosols push rainfall to the northwest, drying out central India. Aerosols emitted during the monsoon season send the moisture supply in a different direction, and dry out most of the subcontinent," explained the study co-author Chien Wang, a senior research scientist at MIT's Center for Global Change Science and in the Department of Earth, Atmospheric and Planetary Sciences.

New research results have been published in the Climate Journal, MIT announced on September 30, 2015.

The study has performed a simulation of the impact of aerosols emitted prior to and during the monsoon season across most of the India. The only excluded part was the northeast region, not well-represented in the model. Results showed the effects of pre-monsoonal input of aerosols persist throughout the monsoon season, further reducing soil moisture in central India.

The most significant consequences include enhanced flooding during the pre-monsoon season across the usually dry northwest regions of India and Pakistan, and reduced agricultural output in central India.

Source: Massachusetts Institute of Technology, The Abstract of the paper – Climate Journal