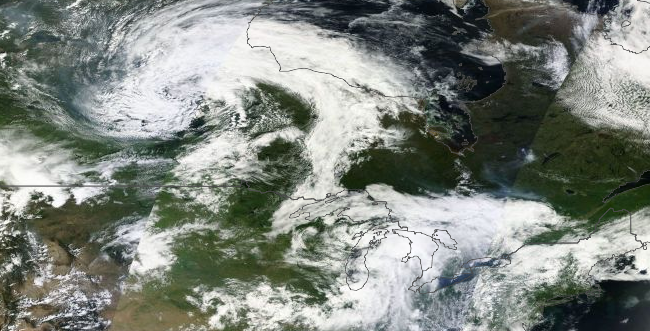 A very warm and humid air mass resulted in the formation of thunderstorms producing very heavy rainfall across portions of Southern Ontario, Canada on July 8, 2013. Numerous thunderstorms affected the same areas resulting in significant rainfall amounts. The areas stretching from Georgian Bay to the Greater Toronto area were hardest hit late in the afternoon and early evening.

Toronto experienced a month's worth of rain in just a few hours. Severe floods left cars and commuters stranded, subway system was crippled and about 300 000 people were left without power.

According to Environment Canada total rainfall amounts over 90 mm have been reported in some locations thus far, and will likely exceed 100 mm before the rainfall tapers off later this evening (July 9, 2013).

Radar estimates that some areas received well in excess of 50 mm of rain. However, some regions received significantly less rain, such as reported at Buttonville Airport. Interestingly, the 126 mm reported at Pearson international Airport surpassed the value reported on October 15, 1954 which occurred during Hurricane Hazel. That date was the previous single rainiest day ever reported at Pearson. 121.4 mm fell on that date. Records date back to 1937 at Pearson.

Later today a few non-severe thunderstorms are likely over Southern Ontario and Northern Ontario. There is a slight risk that they will be severe for regions west of Lake Superior, especially near the Minnesota border with large hail and damaging winds as the main threats.