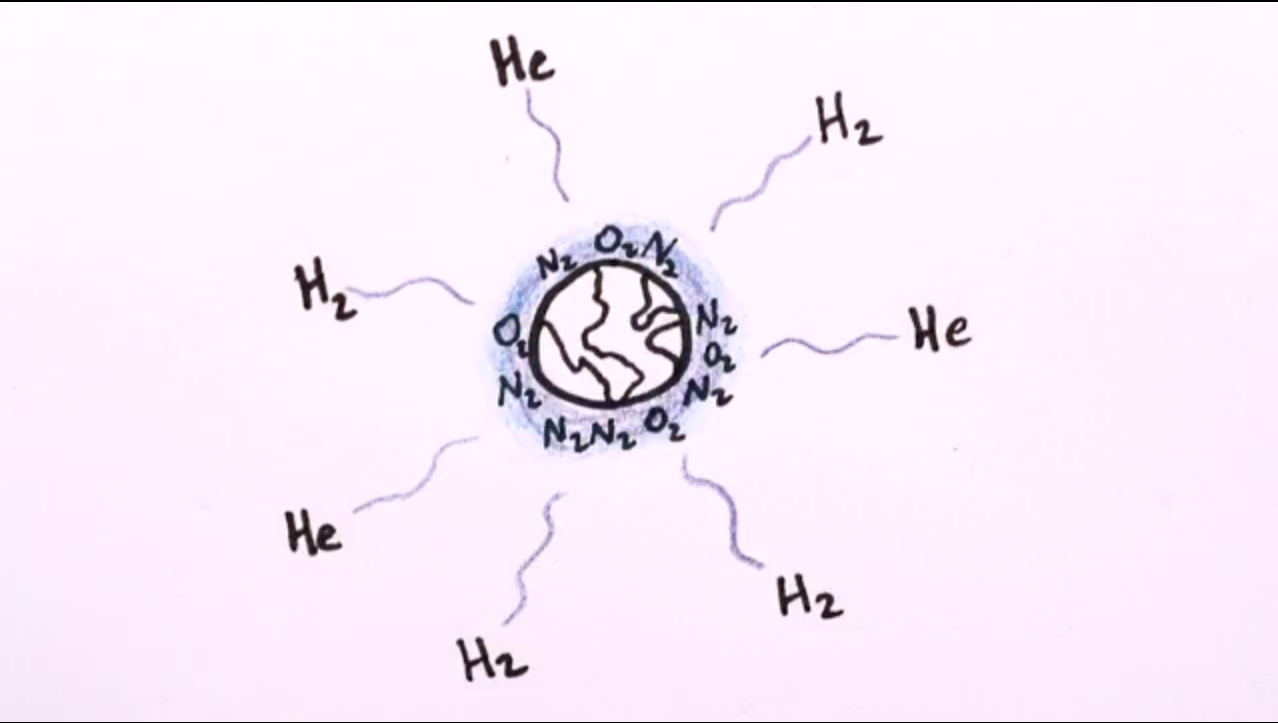 Our planet is surrounded by a wispy layer of gas that keeps us warm, allows the weather to happen and basically makes all of life on Earth possibile.Except that precious atmosphere of ours is leaking into outer space every second. Thankfully it is a rather slow leak, since for any object, weather it is a molecule of gas, a rocket or a cat, to break the tether of our planets gravity and escape, it has to hightail it out of here at a speed of 11 000 m/s.

It takes the energy of a ton of TNT to boost a person to that speed, and less energy for lighter objects ( 1/10 out of that for a cat for example). Other than a large asteroid impact that can eject large amounts of atmosphere into space, the only gases that regularly escape Earths atmosphere are hydrogen and helium.There are different ways hydrogen and helium molecules can wind up on a one-way trip to space.

Some escape by simply getting enough energy from the suns heat-this process is an example of thermal escape mechanisms.

Individual molecules in the high tail of the distribution may reach escape velocity, at a level in the atmosphere where the mean free path is comparable to the scale height, and leave the atmosphere. The more massive the molecule of a gas is, the lower the average velocity of molecules of that gas at a given temperature, and the less likely it is that any of them reach escape velocity.

This is why hydrogen escapes from an atmosphere more easily than does carbon dioxide. Also, if the planet has a higher mass, the escape velocity is greater, and fewer particles will escape. This is why the gas giant planets still retain significant amounts of hydrogen and helium, which have largely escaped from Earth's atmosphere. The distance a planet orbits from a star also plays a part; a close planet has a hotter atmosphere, with a range of velocities shifted into the higher end of the distribution, hence, a greater likelihood of escape. A distant body has a cooler atmosphere, with a range of lower velocities, and less chance of escape. This helps Titan, which is small compared to Earth but further from the Sun, retain its atmosphere.

While it has not been observed, it is theorized that an atmosphere with a high enough pressure and temperature can undergo a "hydrodynamic escape." In this situation atmosphere simply flows off into space, driven by thermal energy. Here it is possible to lose heavier molecules that would not normally be lost.

Others are high-energy charged particles that would usually be stopped from escaping by the Earths magnetic field.Sometimes, however, these speedy electron lacking particles crash into a neutral molecule with enough force to knock loose and steal one of electrons. Now that this speeding particle is neutral itself it is free of our planets magnetic field, and if the collision happens to set it on a course for the stars that is where it will go.

Lastly, some of Earths magnetic field lines are weakened  and pushed away from the earth by the solar wind, which is a violent stream of plasma emitted by our Sun.

But if our planet didn't have a magnetic field at all, things could be a lot worse. Mars, for example, has no protective magnetic field, and so what little atmosphere it has is constantly ripped away by the solar wind. Even with its protective bubble Earth is losing enough helium every second to fill a meter-wide balloon.