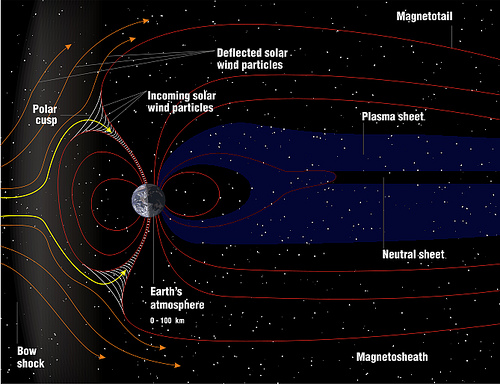 Using ESA’s Cluster satellites as a space plasma microscope, scientists have zoomed in on the solar wind to reveal the finest detail yet, finding tiny turbulent swirls that could play a big role in heating it.

Turbulence is highly complex and all around us, evident in water flowing from a tap, around an aircraft wing, in experimental fusion reactors on Earth, and also in space.

Earth and all of the other planets of our Solar System are like aircraft travelling through a non-stop gale of plasma, mainly protons and electrons, which originates at the Sun. This so-called solar wind begins in the Sun’s searingly hot lower atmosphere and is blasted outward in all directions at an average speed of about 400 km/s (almost 1.5 million km per hour).

In the stream of charged particles emitted by the Sun – the solar wind – turbulence is thought to play a key part in maintaining its heat as it streams away and races across the Solar System. As the solar wind expands, it cools down, but to a much smaller extent than would be expected if the flow were smooth.

Turbulence arises from irregularities in the flow of particles and magnetic field lines, but understanding how this energy is transferred from the large scales where it originates, to the small scales where it is dissipated, is like trying to trace energy as it is transferred from the smooth, laminar flow of a river down to the small turbulent eddies formed at the bottom of a waterfall.

International team of scientists used the high time resolution of the Spatio Temporal Analysis Field Fluctuation (STAFF) magnetometer, which is carried on each of the four Cluster spacecraft. STAFF is capable of detecting rapid variations in magnetic fields, which means that very small spatial structures can be recognised within the plasma.

Satellites have made extremely detailed observations of plasma turbulence in the solar wind. They were separated by just 20 km along the direction of the plasma flow and operated in ‘burst mode’ to take 450 measurements per second. 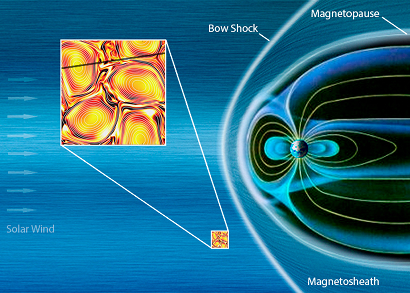 A 2D vision of the solar wind turbulence at the smallest scale seen yet, thanks to observations by Cluster spacecraft. The approximate location of the measurements are indicated on a graphic illustrating features of Earth’s magnetic environment. The inset shows conditions as would be seen facing the solar wind, with current sheets forming at the border of turbulent eddies. The trajectory of the Cluster spacecraft is marked on the inset by the black line and the colour gradients represent the magnetic field strength intensity from 4.8 nT (darkest shades) to 5.2 nT (white).
Satellite: Cluster
Depicts: Illustration of solar wind turbulence
Copyright: Background graphic: ESA/ATG Medialab; inset: J. Dorelli (NASA)

By comparing the results with computer simulations, scientists confirmed the existence of sheets of electric current just 20 km across, on the borders of turbulent swirls.

“This shows for the first time that the solar wind plasma is extremely structured at this high resolution,” says Silvia Perri of the Universita della Calabria, Italy, and lead author of the paper reporting the result.

Cluster previously detected current sheets on much larger scales of 100 km in the magnetosheath, the region sandwiched between Earth’s magnetic bubble – the magnetosphere – and the bow shock that is created as it meets the solar wind.

At the borders of these turbulent eddies the process of ‘magnetic reconnection’ was detected, whereby oppositely directed field lines spontaneously break and reconnect with other nearby field lines, thus releasing their energy.

“Although we haven’t yet detected reconnection occurring at these new, smaller scales, it is clear that we are seeing a cascade of energy which may contribute to the overall heating of the solar wind,” said Dr Perri.

The team examined two sets of STAFF observations. The first data were obtained on 10 January 2004, when two Cluster spacecraft (C2 and C4) were flying only 20 km apart in the Sun-Earth direction, while the two other spacecraft were much further away. At that time, STAFF was operating in rapid ‘burst’ mode, during which it recorded 450 measurements of the magnetic field per second. Additional data were obtained by a single spacecraft (Cluster 2) on 19 March 2006.

“During the 2004 observation, both spacecraft were so close that they observed almost simultaneously the same ‘quasi-stationary’, rotating structure in the solar wind as it passed them by,” said Silvia Perri of the Università della Calabria, Italy, lead author of the paper.

“The magnetic field data showed the typical signature of a current sheet crossing. At that time, the solar wind was flowing at about 550 km/s. Since the current sheet event lasted only 0.07 seconds for both satellites, this corresponded to a spatial size of about 38 km.“

“During the second event, the four Cluster spacecraft were also in the solar wind, but they were too far apart to make a two- or three-dimensional study of the plasma flow. However, the STAFF instrument on Cluster 2 obtained a one-dimensional snapshot of the fluctuations in the turbulent flow and found evidence of a discontinuity in the solar wind which was similar to the previous event.“

“The data show that the plasma turbulence is virtually two-dimensional and consists of thin current sheets that lie perpendicular to the plane of the average magnetic field of the solar wind,” said Melvyn Goldstein of NASA’s Goddard Space Flight Center, a co-author of the paper and the NASA Project Scientist for Cluster.

Future missions such as ESA’s Solar Orbiter and NASA’s Solar Probe Plus will be able to determine whether similar processes are also in play closer to the Sun, while NASA’s Magnetospheric Multiscale mission will specifically probe the small-scale regions where reconnection can occur.

The four Cluster spacecraft are providing a detailed three-dimensional map of the magnetosphere. They are investigating the Earth’s magnetic environment and its interaction with the solar wind in three dimensions. Science output from Cluster greatly advances our knowledge of space plasma physics, space weather and the Sun-Earth connection and has been key in improving the modeling of the magnetosphere and understanding its various physical processes. Images and videos by Cluster.

Recent observations of the solar wind have pointed out the existence of a cascade of magnetic energy from the scale of the proton Larmor radius rhop down to the electron Larmor radius rhoe scale. In this Letter we study the spatial properties of magnetic field fluctuations in the solar wind and find that at small scales the magnetic field does not resemble a sea of homogeneous fluctuations, but rather a two-dimensional plane containing thin current sheets and discontinuities with spatial sizes ranging from l>=rhop down to rhoe and below. These isolated structures may be manifestations of intermittency that localize sites of turbulent dissipation. Studying the relationship between turbulent dissipation, reconnection, and intermittency is crucial for understanding the dynamics of laboratory and astrophysical plasmas. Link to Publication