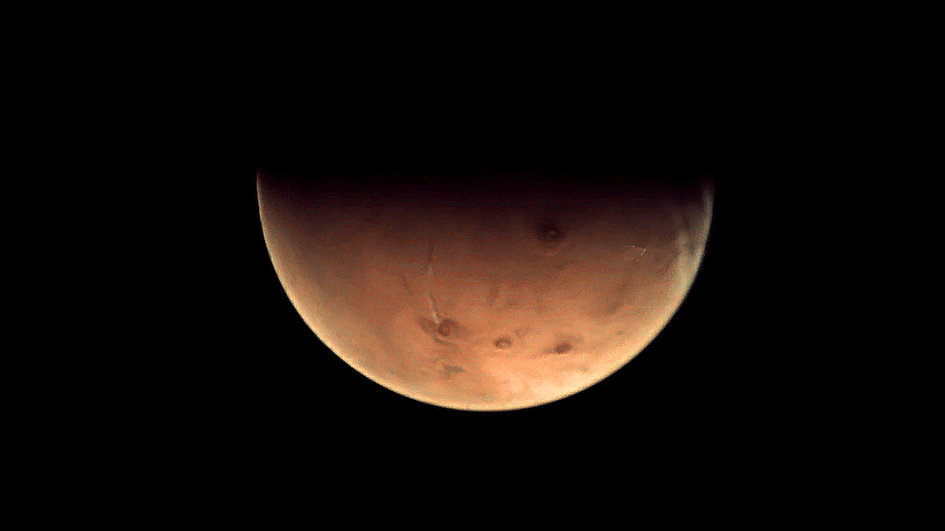 ESA’s new deep-space tracking station (DSA 3) in Malargüe, Argentina received its first image on December 18, 2012. This image was selected as the symbolic ‘first data’ to be downloaded by DSA 3 and it marked its inauguration to service.

The image was captured on December 15, 2012 by the Visual Monitoring Camera on the Mars orbiter and travelled 327 million kilometres in just over 18 minutes.

The precision tracking of the Mars mission by the station’s 610-tonne, 35 m-diameter dish antenna was commanded ‘on’ by Cristina Fernández de Kirchner, President of the Republic of Argentina, via remote link from her office in the Casa Rosada presidential palace.

Among others, the station was inaugurated in the presence of Julio de Vido, Argentina’s Minister of Federal Planning, Services and Public Investment, Thomas Reiter, ESA’s Director of Human Spaceflight and Operations, and Alvaro Giménez Cañete, ESA’s Director of Science and Robotic Exploration.

Once in regular service early in 2013, Malargüe station will support ESA science missions such as Mars Express, Venus Express, Rosetta and, in the future, Gaia, BepiColombo, ExoMars, Solar Orbiter, Euclid and Juice.

The agreement to build and exploit the station was signed with Argentina on November 16, 2009, for a duration of 50 years. The agreement contains benefits, facilities and services to be provided by Argentina. In exchange, ESA will make available to Argentina 10% of the antenna time for their national scientific projects in space. The Comisión Nacional de Actividades Espaciales (CONAE) is responsible for implementing the agreement.

Construction began in January 2010, and the station was substantially complete in spring 2012.

The inauguration of Malargüe also marks the completion of the Agency’s trio of deep-space antenna – DSA – stations as part of the Estrack network and confirms ESA as one of the world’s most technologically advanced space organisations.