In a joint space exploration effort, ESA and Roscosmos have successfully launched their ExoMars 2016 mission to planet Mars. The spacecraft was launched aboard Russian Proton-M rocket from the Baikonur cosmodrome in Kazakhstan at 09:31 UTC on March 14, 2016. It will arrive at Mars on October 19, 2016.

The ExoMars mission was established to address the long-standing question of whether life ever existed on Mars. It is a cooperation between the European Space Agency (ESA) and Roscosmos, the Russian Space Agency, and currently comprises two missions.

The second ExoMars mission is planned for launch in 2018 and comprises a rover and surface science platform. There are indications that ExoMars 2018 may have to be delayed by two years due to lack of funds on the European side.

The ExoMars 2016 TGO will search for signs of life from Mars orbit and for evidence of water-ice deposits on and just beneath the surface. One of its key goals is to follow up on indications from previous space missions and ground-based observations that small amounts of methane exist in the atmosphere of Mars.

Methane should be destroyed by ultraviolet radiation on timescales of hundreds of years, and thus it must still be produced today. Possible sources of methane are biological, from primitive microbes similar to methanogens on Earth, and geological, linked to processes taking place in the presence of hot liquid water beneath the martian surface.

TGO will map the spatial and temporal distribution and isotopic make-up of atmospheric methane and other trace gases to help distinguish between the different origin scenarios. It has the sensitivity necessary to analyse the planet’s gases such as methane in much more detail than any previous or current mission at Mars. It will also image and characterise features on the Martian surface that may be related to trace-gas sources such as volcanoes and act as a data relay for the ExoMars 2018 rover.

The orbiter will enter a highly elliptical orbit on October 19. The distance from the planet’s surface will vary from about 300 km to 96 000 km (186 to 59 600 miles). Aerobraking manoeuvres between January 2017 and November 2017 will bring the orbiter into a circular orbit at 400 km (250 miles) above the martian surface. Science operations will begin in December 2017 and continue for two years.

The second part of the ExoMars 2016 mission is the entry, descent, and landing demonstrator module, Schiaparelli, which will separate from TGO on October 16 and land three days later in a relatively smooth, flat region called Meridiani Planum.

Schiaparelli will enter the atmosphere at an altitude of about 121 km (75 miles) and a speed of nearly 21 000 km/h (13 000 mph). In the three to four minutes that follow, it will be slowed down by the increasing atmospheric drag, with the front shield of the aeroshell bearing the brunt of the heating. At roughly 11 km (6.8 miles) above the surface, Schiaparelli’s speed will have decreased to 1 700 km/h (1 050 mph) and a supersonic parachute will be deployed.

The parachute will slow Schiaparelli down to around 250 km/h (155 mph), and then, at 1.2 km (0.74 miles) from the surface, the back half of the aeroshell, with the parachute attached to it, will be jettisoned. It will be drawn rapidly away from Schiaparelli, which will now be completely free of the aeroshell that had kept it safe en route to Mars. One second later, Schiaparelli will activate its nine hydrazine-powered thrusters to control its speed. An on-board radar system will continuously measure the height above the surface.

At an altitude of around 2 metres (6.5 feet), Schiaparelli will briefly hover. Then its engines will cut out, leaving it to fall the remaining distance to the surface. The touch-down speed will be a few metres per second, and the impact force will be absorbed by a crushable structure on the underside of the lander, similar to the crumple zone in a car. The entire entry, descent, and landing sequence will take less than 6 minutes. 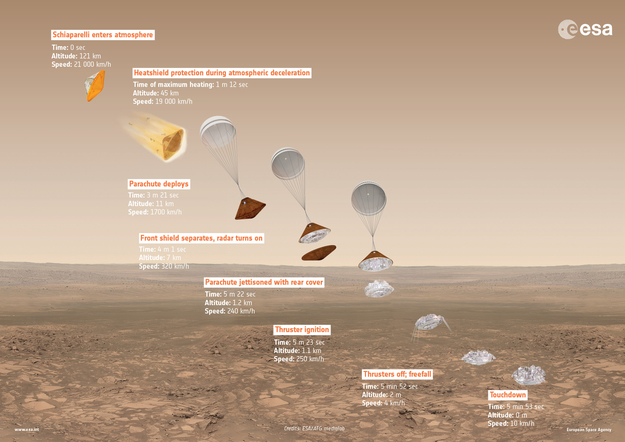 EDM's main goal is to demonstrate that Europe has the essential technology required to make a controlled landing of a probe on Mars, which in turn is a prerequisite for any further exploration of the planet. It also includes a limited set of scientific instrumentation to probe the martian atmosphere during the descent and shortly after landing. Schiaparelli is powered by internal batteries and its mission duration is just several days.

For the ExoMars launch, ESA’s NEO coordination centre in Italy organised an international campaign for ground-based optical observations of the departing spacecraft.

Quick imaging of a rapidly moving object whose location is only approximately known in a short time window is akin to what would happen if an asteroid were discovered on an imminent impact trajectory with Earth.

The predicted path of ExoMars was converted into pointing information for telescopes and the This information was then shared widely with ESA’s network of collaborating observatories in the southern hemisphere, from where ExoMars was observable. Excellent images were acquired by Alison Tripp and Sarah Roberts using a 1 m-diameter telescope in Australia, and by Grant Christie at the Stardome Observatory in Auckland, New Zealand.

The most remarkable images, however, were acquired just before midnight local time by the Observatório Astronômico do Sertão de Itaparica team in Brazil led by Daniela Lazzaro, with Sergio Silva at the telescope. 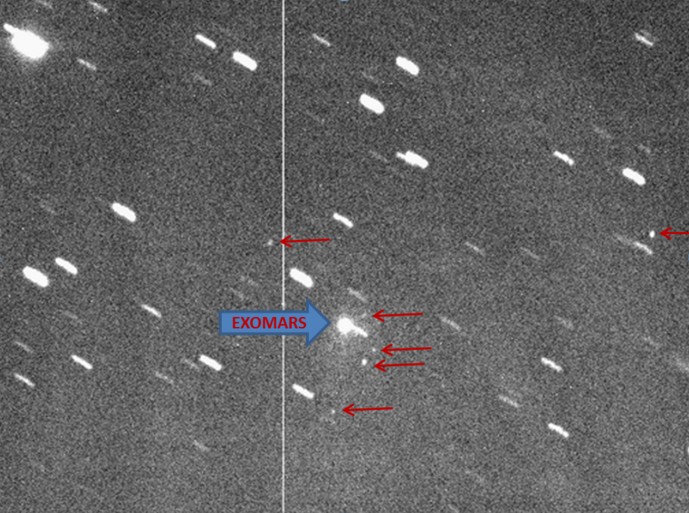 In their images, the spacecraft appears as a bright object surrounded by at least six other fainter spots – elements of Proton’s discarded upper stage – moving together in the sky (see red arrows)

Operations image of the week: #ExoMars seen from Brazil as it heads off to the Red Planet https://t.co/A3GHLKkDWx pic.twitter.com/i6Gcgota82