ESA's Rosetta mission has revealed that its target comet, Comet 67P/Churyumov-Gerasimenko, has its own far-ultraviolet aurora. This is the first time such electromagnetic emissions in the far-ultraviolet have been detected on a celestial object, aside from any planet or moon.

Aurora is a phenomenon of glowing ionized particles that is seen not only in the Earth's upper atmosphere but every other planet– except Mercury. Even Jupiter's moons Ganymede and Europa have their own auroras.

In a new study comprised of data collected by ESA's Rosetta spacecraft, an aurora was detected for the first time on a comet. The mission's target object, Comet 67P/Churyumov-Gerasimenko (67P/C-G), has been observed glowing with ultraviolet auroral radiation.

"I've been studying the Earth's auroras for five decades," said physicist Jim Burch of the Southwest Research Institute. "Finding auroras around 67P, which lacks a magnetic field, is surprising and fascinating."

On Mars, although the magnetic field is weak, it can still support auroras. Meanwhile, Saturn's main auroral ring appears to be generated by the solar wind, but there are patches of it that remain a mystery to scientists. 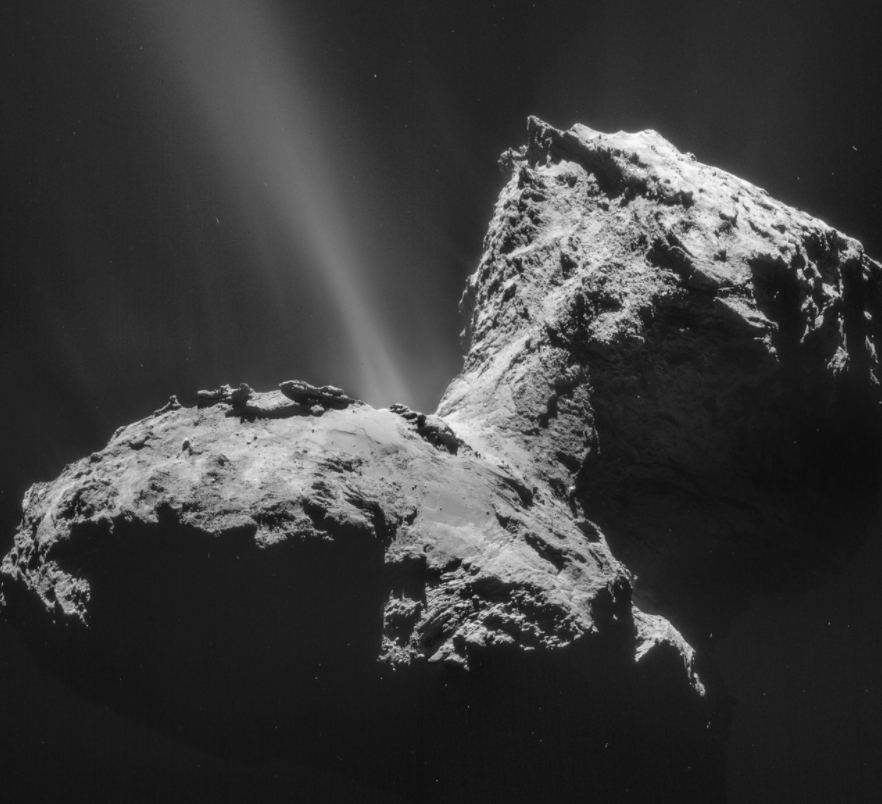 "The glow surrounding 67P/C-G is one of a kind," said lead author Marina Galand of Imperial College London. "By linking data from numerous Rosetta instruments, we were able to get a better picture of what was going on. This enabled us to unambiguously identify how 67P/C-G's ultraviolet atomic emissions form."

The data indicate that the comet's emissions are auroral in nature. While the object doesn't have a magnetic field, it has an atmosphere– the envelope of gas called a coma. Here, the far-ultraviolet spectrograph on an instrument aboard Rosetta detected a glow in far-ultraviolet light.

"Initially, we thought the ultraviolet emissions at comet 67P were phenomena known as 'dayglow,' a process caused by solar photons interacting with cometary gas," explained astronomer Joel Parker of the Southwest Research Institute.

"We were amazed to discover that the UV emissions are aurora, driven not by photons, but by electrons in the solar wind that break apart water and other molecules in the coma and have been accelerated in the comet's nearby environment. The resulting excited atoms make this distinctive light."

This new discovery could provide new clues to understanding how auroras are generated throughout the solar system. Cometary auroras can also be studied to learn more about space weather.

Having a nucleus darker than charcoal, comets are usually detected from Earth through the emissions from their coma. The coma is an envelope of gas that forms through the sublimation of ices from the nucleus as the comet gets closer to the Sun. In the far-ultraviolet portion of the spectrum, observations of comae have revealed the presence of atomic hydrogen and oxygen emissions. When observed over large spatial scales as seen from Earth, such emissions are dominated by resonance fluorescence pumped by solar radiation. Here, we analyze atomic emissions acquired close to the cometary nucleus by the Rosetta spacecraft and reveal their auroral nature. To identify their origin, we undertake a quantitative multi-instrument analysis of these emissions by combining coincident neutral gas, electron, and far-ultraviolet observations. We establish that the atomic emissions detected from Rosetta around comet 67P/Churyumov-Gerasimenko at large heliocentric distances result from the dissociative excitation of cometary molecules by accelerated solar-wind electrons (and not by electrons produced from photo-ionization of cometary molecules). Like the discrete aurorae at Earth and Mars, this cometary aurora is driven by the interaction of the solar wind with the local environment. We also highlight how the oxygen line O I at wavelength 1,356 Å could be used as a tracer of solar-wind electron variability.