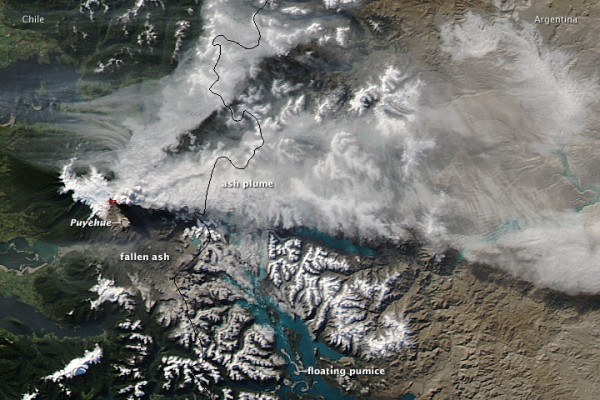 As ash from Chile’s Puyehue-Cordón Caulle Volcanic Complex continues to disrupt flights half a world away, the eruption itself persists. The Moderate Resolution Imaging Spectroradiometer (MODIS) aboard the Aqua satellite acquired this natural-color image on June 20, 2011. At the time a light-colored ash plume extended to the east, into Argentina. The Joint Air Force & Army Weather Information Network reported the ash at an altitude of 27,000 feet (8,200 meters). South of the plume floating pumice, produced earlier in the eruption, covered portions of Nahuel Huapi, a large lake in Argentine Patagonia. The location of the eruption site is indicated by a red outline.