Impact of solstice solar flare is expected on June 24th

A CME propelled toward Earth by the "solstice solar flare" of June 21st may be moving slower than originally thought. Analysts at the GSFC Space Weather Lab have downgraded the cloud's probable speed from 800 km/s to 650 km/s. Impact is now expected on June 24th at 0700 UT plus or minus 7 hours. In this animated forecast model, the yellow dot is Earth: 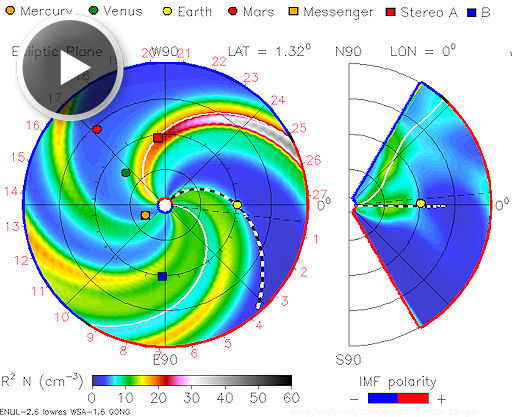 A slower CME should deliver a weaker blow to Earth's magnetic field. Forecasters now predict a relatively mild G1-class (Kp=5) geomagnetic storm when the cloud arrives. High-latitude sky watchers should be alert for auroras during the early hours of June 24. The season favors observers in the southern hemisphere where solstice skies are winter-dark. (SpaceWeather)