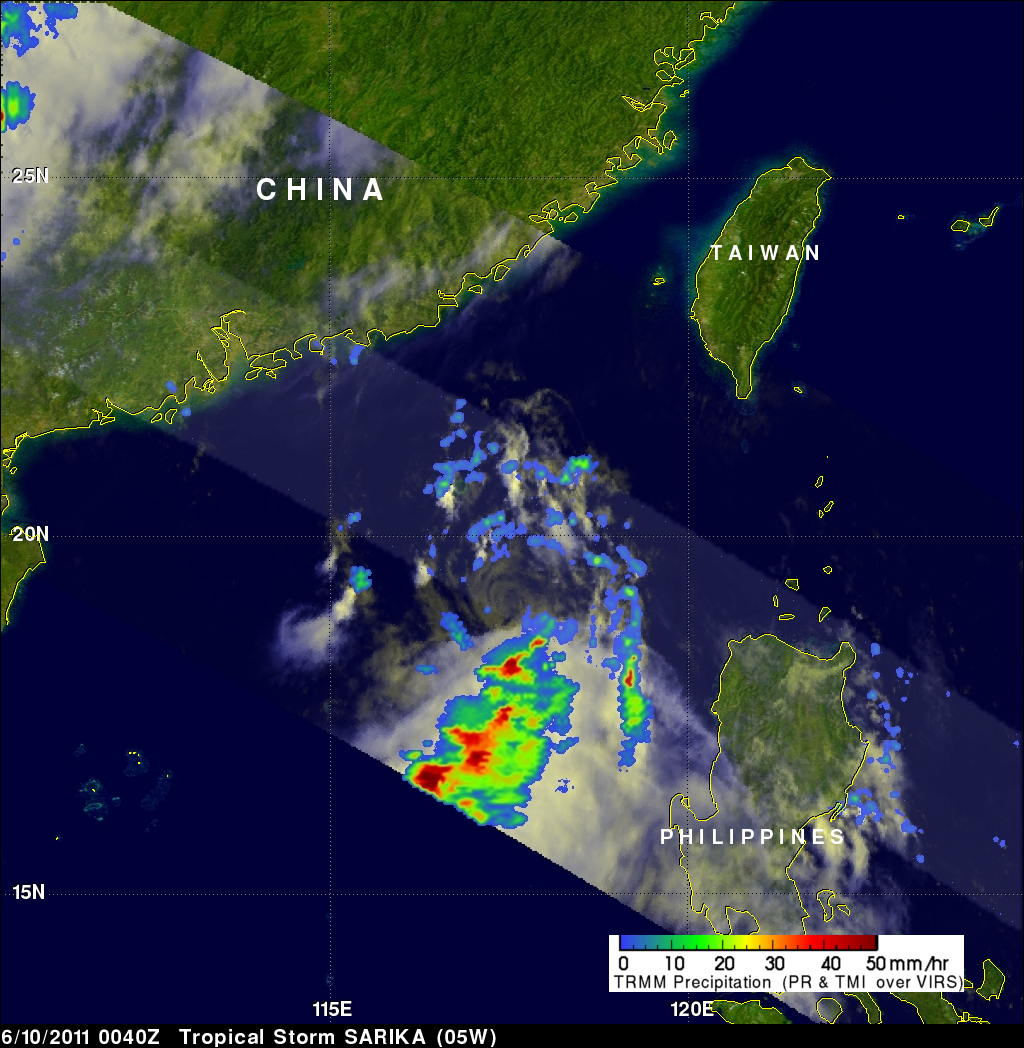 Tropical Depression 05W has grown into a tropical storm and given the name Sarika as it heads toward China. Satellite imagery from NASA shows that the center of the storm seems to be separated from the strongest thunderstorms.

The Tropical Rainfall Measuring Mission (TRMM) satellite that is co-managed by NASA and the Japanese Space Agency measures rainfall in the tropics, and today’s satellite imagery (June 10, 2011) on Tropical Storm Sarika shows that the heaviest rainfall (falling at 2 inches/50 mm per hour) is south of the center of the storm’s circulation. That’s an indication that the storm will not intensify. Normally in intensifying storms the heaviest rainfall is around the center of circulation. TRMM imagery is created at NASA’s Goddard Space Flight Center in Greenbelt, Md. 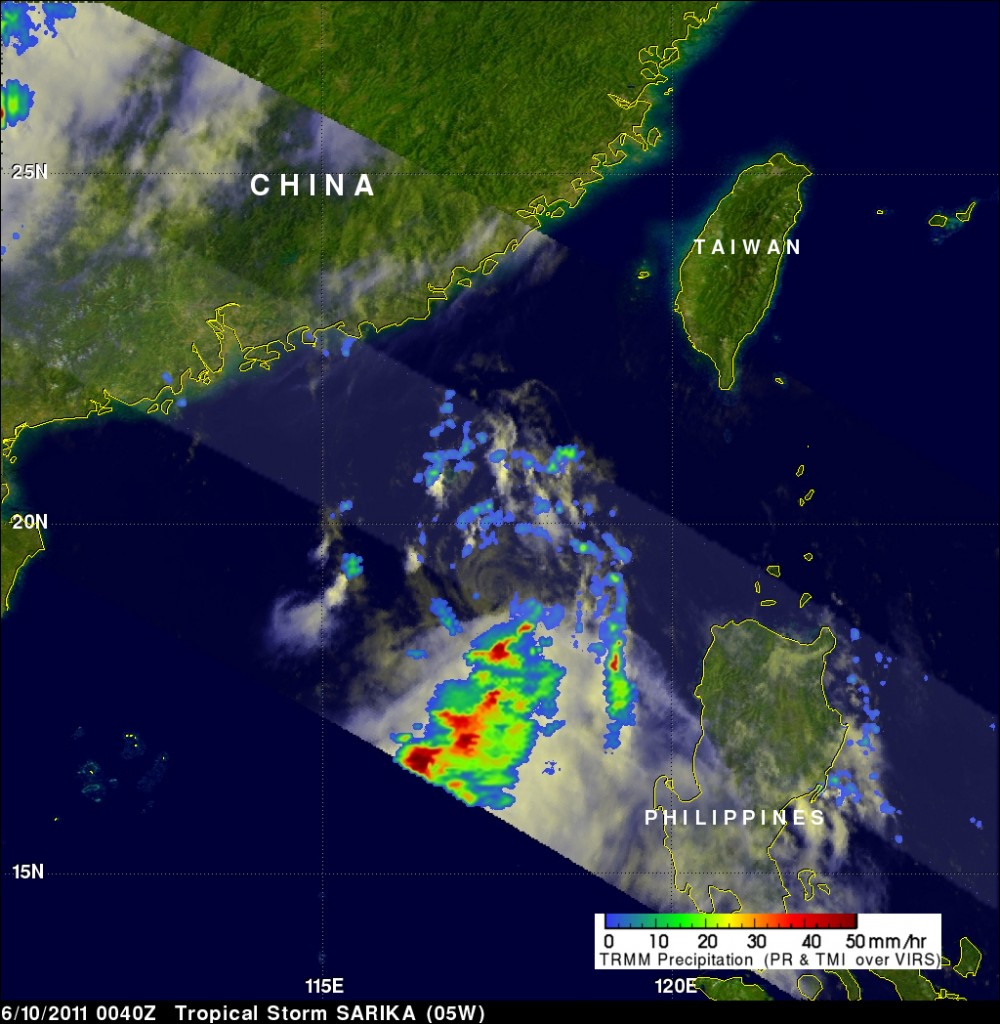 In addition, infrared satellite imagery revealed that the low-level circulation center is now fully exposed, which allows outside winds inside to weaken the circulation of the storm. As the system continues to track north, it is expected to run into stronger wind shear, which is expected to keep the storm from strengthening.

Regardless of intensification, Tropical Storm Sarika is in the South China Sea and charting a course for Hong Kong and China and both have posted warnings. Hong Kong posted a “Stand-by Signal 1” across the territory.

Although Sarika didn’t intensify into a cyclone until today, it brought heavy rainfall and flooding in the northwestern Philippines. A weather observer named Adonis was in contact with NASA’s Hurricane web page and noted that five people were reported killed from rapidly rising flood waters in Central Luzon. He noted that intermittent rainfall fell in Iloilo and Guimaras Island last night as the system pulled away to the north.

Sarika is forecast to intensify before making landfall and dissipate east of Hong Kong over the weekend. (NASA) 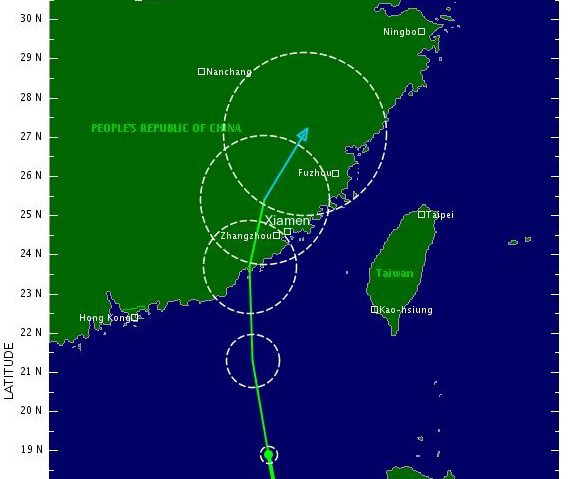 Sarika, the year’s third tropical storm, may become the first to land in China this year, local meteorological authorities said on Friday. The tropical storm is currently located about 530 kilometers south of the city of Shantou in south China’s Guangdong Province, according to the provincial meteorological station.

Packing winds of 18 km per hour, the storm is predicted to land somewhere between the city of Shanwei in Guangdong and Zhangpu County in nearby Fujian Province on Saturday, said meteorologist Zhang Dong.

Sarika will move at a speed of 20 to 25 km per hour and become stronger over the next 24 hours, said Zhang. The storm will unleash torrential rains in eastern Guangdong and lash the Bashi Channel and the Taiwan Strait with strong winds, according to Zhang.

Sarika is forecasted to bring moderate to heavy showers to Xiamen on Friday and Saturday, and some mountainous areas off the Xiamen Island may witness torrential rains, with predicted rainfall of 30-50mm, according to the Xiamen Flood Control Headquarters.

The State Oceanic Administration has ordered ships in the area to take extra precautions to avoid the storm. 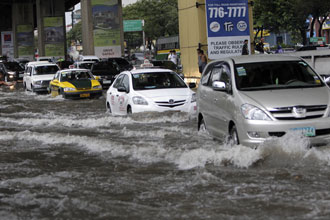 SIX people were killed and 27 others were missing at sea as Tropical Storm Sarika headed out of Philippine waters on Friday with many communities still flooded, rescuers said.

Four people drowned in the major southern island of Mindanao earlier this week while a boy died after falling into a swollen creek in Batangas city near Manila, and a woman drowned on the central island of Tablas, they said.

The National Disaster Risk Reduction and Management Council said 26 Filipino fishermen were missing near the Spratly Islands in the South China Sea. One crew member of a barge went missing as the vessel, which was carrying agricultural products, was driven by strong winds off the town of Sariaya, south of Manila, it added.

Several hundred people remained at evacuation centres across Luzon early Friday while waiting for floodwaters to recede, the disaster council said in its latest update.

Sarika was heading for south-eastern China on Friday with peak winds of 65km an hour, after brushing the west coast of the main Philippine island of Luzon, the state weather service said.

An average of 20 storms and typhoons, some of them deadly, hit the Philippines every year. Last month, tropical storm Aere left 31 people dead before Typhoon Songda killed another three. (StraitTimes)