An active region on the far side of the sun erupted on October 14 and hurled a significant coronal mass ejection toward Mercury and Venus. Analysts at the Goddard Space Flight Center expect the cloud to hit the innermost planet on October 15 around 08:30 UTC. (SpaceWeather) 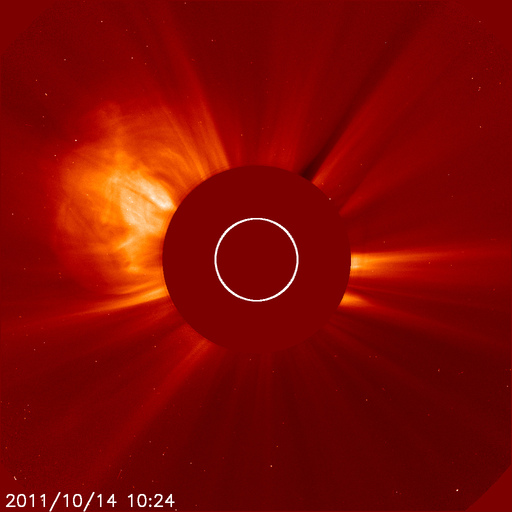 Several regions on the farside of the Sun have been producing Coronal Mass Ejections (CME) over the past 3 days Oct 13 - 15, 2011. This Movie shows what could be laying ahead for us in the near future.

Despite the sunspot count, solar activity remains low heading into the weekend. Sunspot 1309 has rotated onto the western limb and it looks like Sunspot 1315 has faded away. A new region that formed towards the east of sprawling Sunspot group 1319 now looks to be fading as well. The three largest Sunspot groups are currently 1314, 1316 and 1319. There will remain the chance for C-Class flares and there is the possibility for an isolated M-Class event. (SolarHam)

The government of Madagascar has declared a national emergency on Monday, January 27, 2020, following days of intense downpour that triggered widespread flooding and devastations across the country. The severe weather has so far claimed 31 lives, displaced more than...

Authorities confirmed on Monday, January 27, 2020, that the death toll from China's coronavirus has hit 82 while the number of confirmed cases has reached more than 2 700. Beijing officials also reported the capital's first fatality who was a 50-year-old man...

Authorities in Kazakhstan's capital city Nur-Sultan (previously named Astana) have declared a state of emergency on Monday, January 27, 2020, due to a powerful winter storm that has been battering the country since Thursday, January 23, unleashing strong winds...

A severe hailstorm hit Malaga, Spain on Thursday, January 23, 2020, causing chaos in parts of the province as heavy rain and hail trapped commuters in tailbacks. In addition, flash floods swept away numerous vehicles, leaving them piled up. The event came just...

Taal volcano alert down to level 3, PHIVOLCS warns the threat of a dangerous explosion is not over, Philippines

Taal Volcano in Batangas province, Philippines, was downgraded from Alert Level 4 to 3 on Sunday morning, January 26, 2020-- two weeks after its devastating ash eruption on January 12. However, PHIVOLCS warned that this does not indicate that the threat of a...

According to the Icelandic Met Office (IMO), unusually rapid inflation has been detected at Mt. Thorbjorn on the Reykjanes Peninsula over the past few days, indicating a possible magma accumulation. In addition, an earthquake swarm has been ongoing during the same...

Strong and shallow M6.3 earthquake hits near the coast of Solomon Islands

Storm Gloria: Death toll rises to 13, over 1 500 evacuated in France after two months' worth of rain in 48 hours

At least 13 people have died in Spain and more than 1 500 were evacuated in southwest France, authorities confirmed on January 24, 2020, after powerful Storm Gloria caused widespread flooding and left a trail of destruction in its wake. In parts of France, Gloria...

Two newly discovered asteroids flew past Earth within 1 lunar distance since January 20, 2020. These are the second and third known asteroids to flyby Earth within 1 LD since the start of the year. The first, designated 2020 BK3 is an Apollo-class asteroid that flew...

China's coronavirus has killed 26 people and infected 830 as of Friday, January 24, 2020, the National Health Commission (NHC) confirmed. The worsening case prompted more cities in Hubei province to restrict travel, following the lockdown of Wuhan-- the center...

NASA astronaut Christina Koch shared a stunning photo of the Quadrantid meteor shower-- this year's first meteor shower-- from her view aboard the International Space Station (ISS). The majestic view also features green bands of the aurora borealis or northern...

Heavy rains triggered several floods and landslides in Peru on Wednesday, January 22, 2020, particularly affecting the departments of Arequipa and Huanuco. As a result, houses were left damaged and many roads had to be closed. Authorities said damage assessments...