Is Icelandic volcano preparing to blow?

Katla, one of the largest volcanoes in Iceland, appears to be preparing for a long overdue eruption, scientists say. The volcano has a history of erupting about twice a century. With its last eruption having come in 1918, 93 years ago, it is well behind schedule. Volcano experts point to signs like an increasing number of small earthquakes in the area around Katla. One quake last week hit magnitude 4 on the Richter scale.

David Rothery of Britain's Open University said the volcano is at least as likely to subside as to erupt. He described volcanoes as unpredictable. Katla is in southern Iceland, north of the coastal town of Vik i Myrdal. It is partly covered by a glacier and its last eruption caused major flooding.

The eruption of the neighboring Eyjafjallajokul last year sent an ash cloud into the air that disrupted air traffic over the Atlantic Ocean for weeks. Airlines lost an estimated $1.6 billion because of canceled or re-routed flights. (TerraDaily) 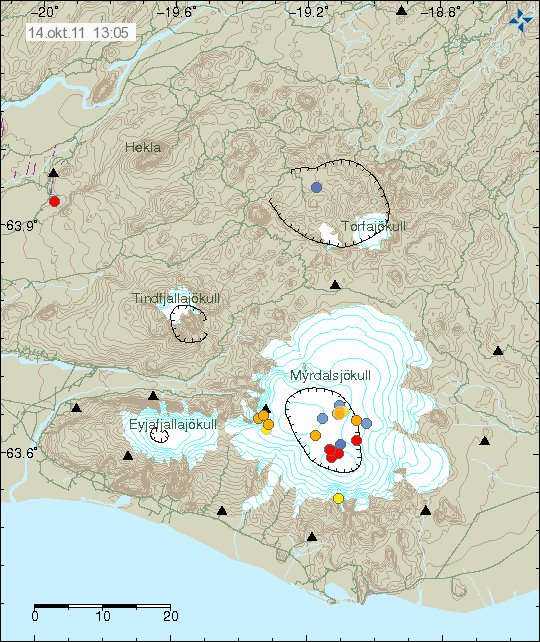 Earthquake activity continues in Katla volcano as before. Most of the earthquakes are as before just small ones. Currently the earthquakes do not appear to be from dike intrusion as happened last week (5 October, 2011) with the earthquakes that where up to ML3.9 in size (checked data). After this large earthquake swarm activity dropped considerably. But it has been picking up again slowly during the week. But earthquake observation has been difficult due to frequent storms during the past two weeks that have been passing over Iceland. This storms have had wind up to 30m/s and wind gusts up to 56m/s (recorded). (jonfr)

A large landslide occurred at the La Granja landfill site in La Primavera, Antioquia in Colombia on May 3, 2021, partially blocking the Medellin River. The general director of the Administrative Department of Risk Management of Antioquia (DAGRAN) said a team visited...