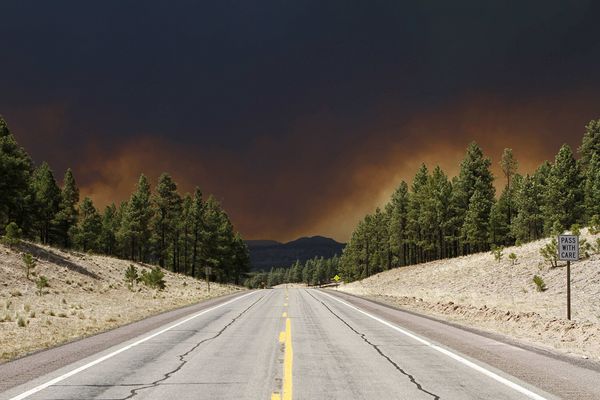 Smoke from Arizona fires, including the Wallow Fire, continued traveling toward the northeast on June 8, 2011. As the Moderate Resolution Imaging Spectroradiometer (MODIS) on the Terra satellite acquired this natural-color image at 12:10 Central Daylight Time, thick smoke stretched from New Mexico and Texas northeastward to Illinois.

Red outlines in this image indicate actively burning fires, but the blazes primarily responsible for the smoke lie to the west. On June 8, 2011, the U.S. Air Quality “Smog Blog” reported that wildfires in eastern Arizona affected air quality throughout much of the eastern United States. The thickest smoke occurred over the Plains States, but thinner smoke plumes reached Quebec, Canada, and stretched to the Atlantic Ocean off New England. 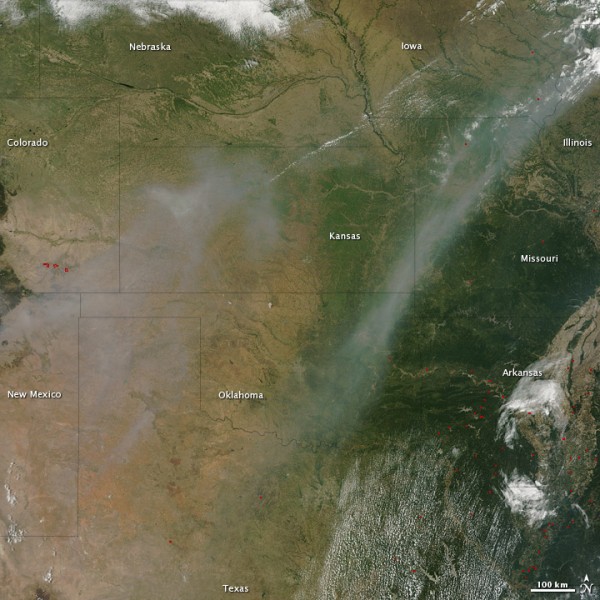 Code Orange to Red (Unhealthy for Sensitive Gropus and Unhealthy AQI, respectively) ozone concentrations were recorded in locations along the Interstate 95 corridor. KNMI's tropospheric NO2 product reveals that concentrations were high in the locations that experienced Code Orange and Red ozone AQI levels, as the photochemical production of ozone in the troposphere is tied to NOx (NO + NO2).

Particle pollution levels in the area covered by the Arizona wildfires and the surfahigh-pressureure system over the eastern United States reached Moderate (Code Yellow) concentrations. Smoke from the Arizona wildfires was observed over the Baltimore-Washington metro area, between 5-9 km above the surface, as shown in the lidar image below from the micropulse lidar located at NASA's Goddard Space Flight Center. (alg.umbc.edu) 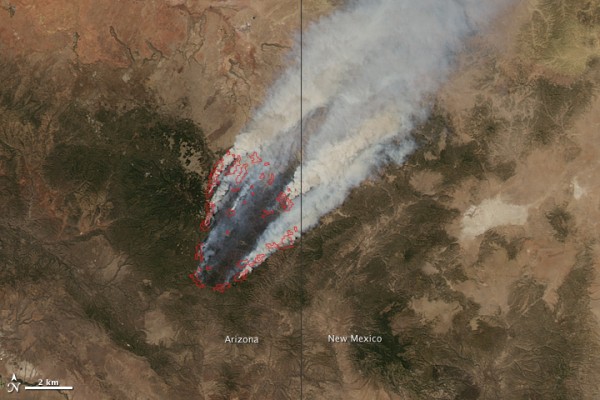 After several days of extreme fire behavior, the Wallow Fire has become the second largest fire in Arizona history. By early afternoon on June 8, 2011, the fire had consumed 389,000 acres (608 square miles), largely in the Apache National Forest, and was completed uncontained. This image, taken by the Moderate Resolution Imaging Spectroradiometer (MODIS) on the Aqua satellite, shows the fire at 1:25 p.m. local time.

The actively burning fire front (outlined in red) surrounds a vast area of charred land. High winds propelled the fire, igniting spot fires as much as three miles ahead of the fire front on June 8, said the Arizona Emergency Information Network. Dense plumes of smoke billow from the fire and stream northeast in the strong winds that drove the flames. The smoke has been affecting air quality through much of the United States.

The Wallow Fire started because of human activity on May 29. It has forced evacuations from several eastern Arizona communities including Sunrise, Greer, Blue River, Alpine, Nutrioso, Eager, and Springerville. As of June 8, the fire has threatened 588 structures and destroyed 11. (EO) 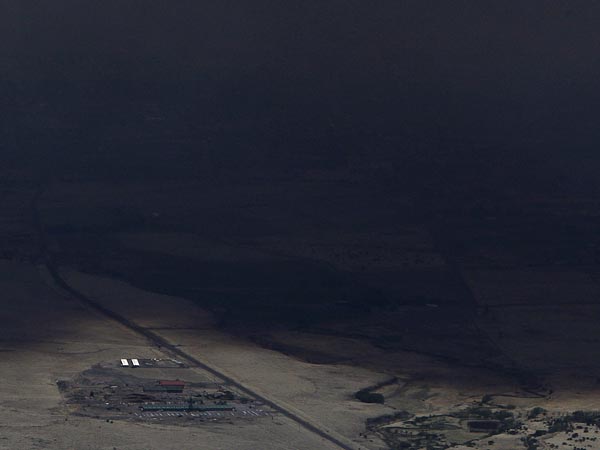 The Apache County Sheriff's Office has issued a full evacuation for Eagar and Springerville, effective immediately. WEST of Main St. in Eagar and Springerville, including areas north of Highway 260 and south of Highway 60, including the airport. A pre-evacuation notice is in effect Greens Peak, Hidden Meadows, and the surrounding areas. (USDA ForrestService)

Numbers on Property Damage in Greer

The property damage has been assessed in the community of Greer. In total, 22 homes lost, 5 damaged, 24 out-buildings, and 1 vehicle. Apache County Sheriff's Officials are in the process of notifying the property owners. (InciWeb) 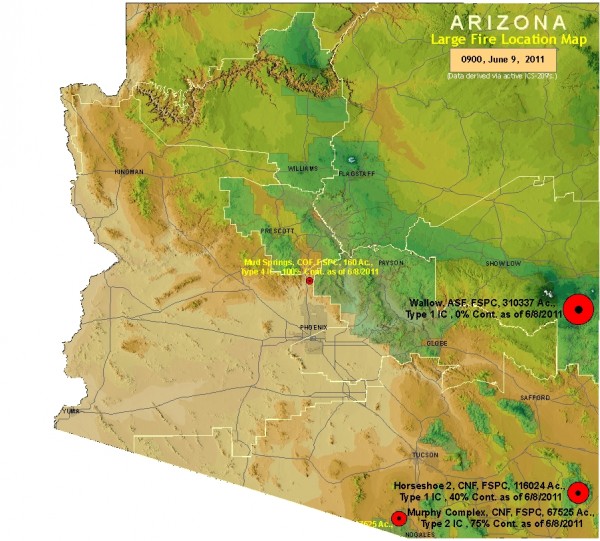 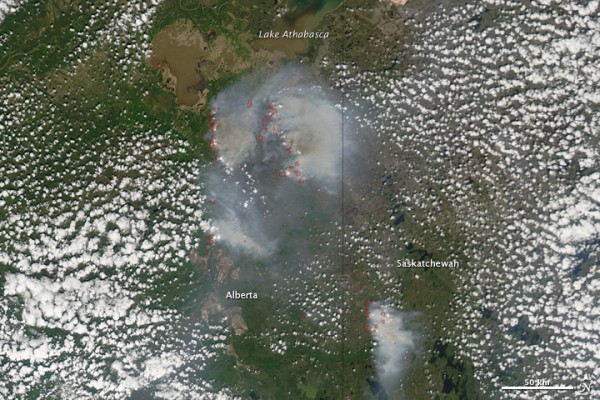 Smoke hangs over a large wildfire burning in the northeast corner of Alberta, Canada, in this natural color image taken by the Moderate Resolution Imaging Spectroradiometer (MODIS) on the Aqua satellite on June 8, 2011. Red outlines actively burning areas.

The fire has been burning for three weeks and has consumed a staggering 416,000 hectares (1,028,000 acres or 1,600 square miles), reported CBC News. The fire started in mid-May when multiple fires ignited in Alberta under high winds and low humidity. Fire danger in northeast Alberta remains high, said the government of Alberta. (EO)