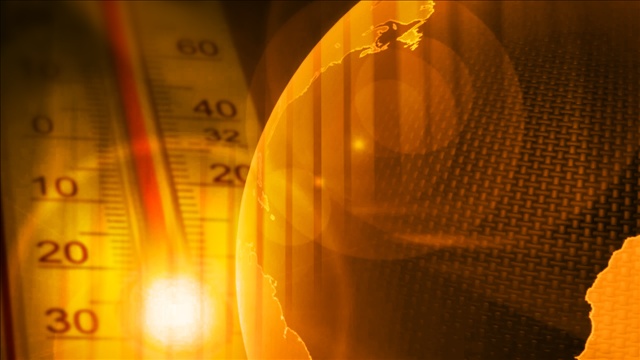 The National Weather Service said a heat burst was observed at Wichita's Mid-Continent Airport. The temperature jumped 17 degrees in 20 minutes, from 85 degrees at 12:22 a.m. to 102 degrees at 12:42 a.m. The heat burst was also accompanied by winds of 40 to 50 miles per hour.

Volunteers at the Wichita Riverfestival spent the morning cleaning up after the rare weather event. The winds blew tents over, damaged fences, tossed trash dumpsters and sent port-a-potties on their sides. Volunteers gathered early this morning and cleaned up so the festival could go on as planned. Mayberry Middle School in west Wichita lost part of its roof, and many Wichita residents woke to find tree limbs down.

Mayberry Middle School, 207 S. Sheridan, lost most of the roof over its auditorium. At one point, Westar reported more than 4,000 customers in the Wichita area without power. Most of the service has been restored.

Heat bursts are very rare, occurring late at night or early morning. The area of dry air often follows a thunderstorm or shower. They are often accompanied by gusty winds. (Kake)

In meteorology, a heat burst is a rare atmospheric phenomenon characterized by gusty winds and a rapid increase in temperature and decrease in dew point (moisture). Heat bursts typically occur during night-time and are associated with decaying thunderstorms. Although this phenomenon is not fully understood, it is theorized that the event is caused when rain evaporates (virga) into a parcel of cold dry air high in the atmosphere making the air denser than its surroundings. The parcel descends rapidly, warming due to compression, overshoots its equilibrium level and reaches the surface, similar to a downburst.

Recorded temperatures during heat bursts have reached well above 90 °F (32 °C), sometimes rising by 20 °F (11 °C) or more within only a few minutes. More extreme events have also been documented, where temperatures have been reported to exceed 188 °F (87 °C), although such extreme events have never been officially verified. Heat bursts are also characterized by extremely dry air and are sometimes associated with very strong, even damaging, winds. (Wikipedia) 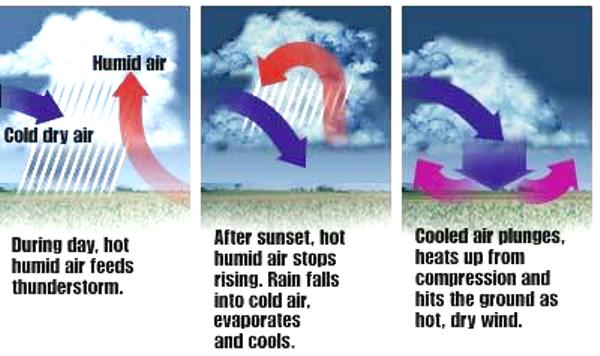 An unusual heat burst occurred shortly after midnight on June 9, 2011, across the Wichita area. The temperature jumped some 15 to 20 degrees in a matter of 15 to 20 minutes, rising from the low to mid-80s to around 102 degrees. The sudden rise in the thermometer was accompanied by a downburst of winds that gusted to near 60 mph in some locations. 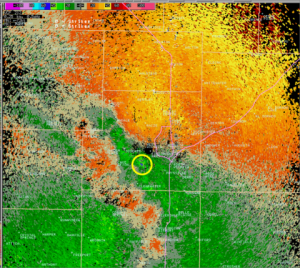 The heat burst was first noted on the west side of the city around 12:30 am. The temperature rose from 85 degrees at 12:22 am at the Mid-Continent airport to 102 degrees at 12:42 am. Winds gusted to around 45 mph. Several other observations across the west side showed a temperature jump into the mid to upper 90s. The heat burst shifted to the east side of the city after 1 am. A similar jump in the temperature was noted at both Jabara airport and McConnell Air Force Base rising to near 100 degrees shortly after 1 am this morning. The hot burst of air was also very dry…with dew point temperatures dropping from the 60s into the 20s and 30s. 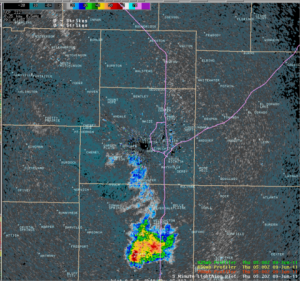 The burst of hot air in the middle of the night was likely the result of showers and storms which dissipated about 30 to 60 minutes prior to the heat burst being felt. The rainfall evaporated as high-level air descended from the dying storms. This air compressed and warmed significantly as it descended…resulting in a hot blast of air at the ground. Environmental conditions with the presence of dry air aloft have to be just right to produce the rare occurrence of a heat burst. (CRH.NOAA)

A heat burst is a downdraft of hot and dry air that typically occurs in the evening or overnight hours. A heat burst is much more rare than a severe thunderstorm. Thus, the atmospheric conditions have to be just right for a heat burst to occur. Heat bursts usually happen in the evening or at night after thunderstorms are ending. Thus, a thunderstorm has a vital role. Two other characteristics are that the air must start its descent from fairly high up and the environmental air aloft needs to be very dry. (WPC)

The storms yesterday had a history of producing hail and damaging winds in parts of Wisconsin, Michigan, southern Ontario, upstate New York and in parts of New England. While extreme heat will hold strong over the central and southern Plains through much of the South, it will collapse with the aid of strong to locally severe thunderstorms across the north.

A broad area from Portland, Maine, and Boston to New York City, Philadelphia, Washington, D.C.,Pittsburgh, Cincinnati and Charleston, W.V. are at risk for locally damaging thunderstorms into tonight.  While the bulk of the storms will tend to bring straight-line wind gusts, commonly known as downbursts, a could touch down in a few of the strongest storms.

Another factor of thunderstorms that is sometimes taken for granted is lightning. If you can hear thunder, you are at risk for being hit by lightning. Seek shelter indoors. A hardtop vehicle offers excellent protection from lightning.

Thunderstorms are less likely to weaken a great deal upon nearing the coast in this situation. Low-level winds may be more out of the west and southwest in the coastal areas, taking away some of the cooling effects of the ocean.  Significantly cooler air was invading the Great Lakes today and will arrive in New England and the northern mid-Atlantic tonight and Friday. Although the southern mid-Atlantic and the Ohio Valley will stay warm and humid, the edge will have been taken off the heat.

Thunderstorms will frequent the zone from the upper Midwest to the mid-Atlantic coast through much of the weekend as a storm system from the northern Rockies cruises in, bringing a return flow of moisture this weekend. Downpours could be a factor in weekend NASCAR activities at Pocono Raceway, perhaps resulting in postponements or rain-shortened events. (AccuWeather)

An early season heat wave is underway across much of the Northeast, affecting major population centers from Washington, D.C., to New York City. The NWS Washington/Baltimore, Philadelphia, State College, Pa., and New York Weather Forecast Offices have issued Heat Advisories and/or Excessive Heat Warnings for this afternoon and evening.