Temperatures in much of northwest Europe have hit record levels as unusually warm weather gripped the region on Tuesday, March 30, 2021, starting with the UK, which registered its warmest March day in 53 years when the mercury soared above 24 °C (75.2 °F). The heat dome is forecast to dissipate in the coming days, while a new area of high pressure is expected over Iceland and northern Britain. Forecast models call for significant cool-off in the days ahead, centered first in SE Europe, followed by another significant and widespread cold wave.

According to Met Office forecaster, Alex Burkill, Tuesday's temperature was 'exceptionally high for the time of year.'

Steve Ramsdale, a chief meteorologist at the Met Office, added, "Highs will fall to the mid-teens before falling further by Friday (April 2), especially along the east coast."

Jersey, the largest of the Channel Islands just 16 km (10 miles) off northern France, hit 22.9 °C (73.2 °F) on Tuesday afternoon, smashing the highest March temperature in the area in more than 125 years of record. 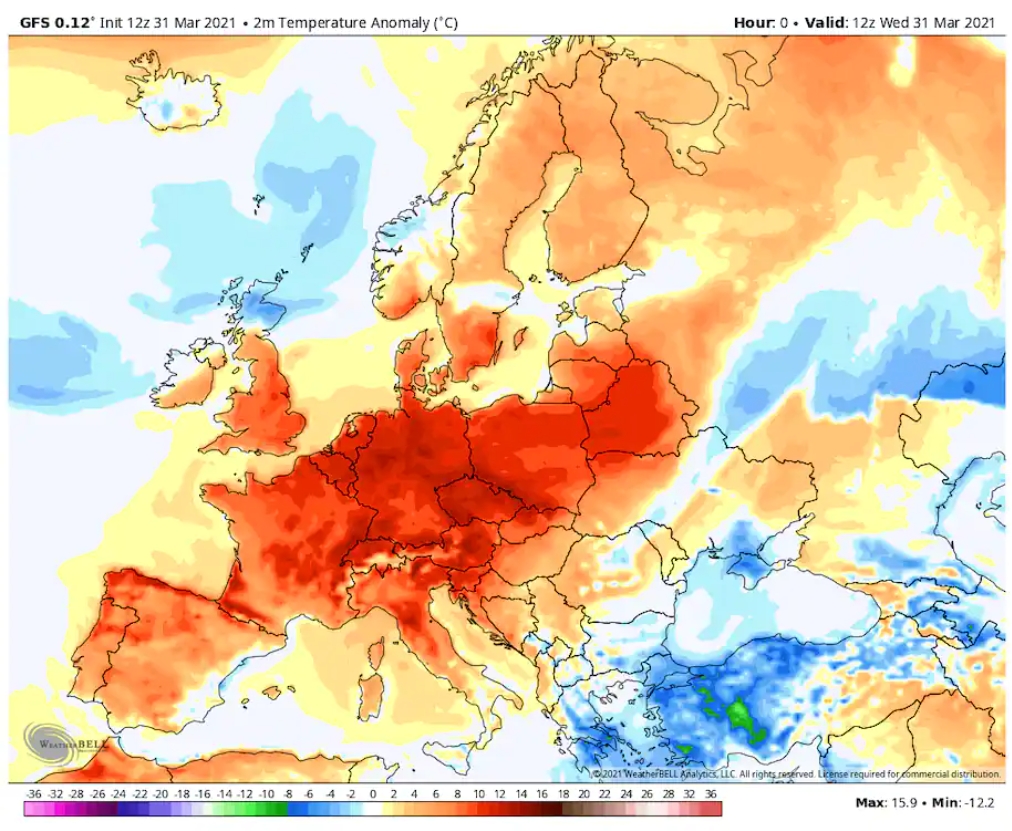 Belgium had 13 stations break local monthly records on the same day, while Austria had 29 stations. Records also fell in Spain and Oman.

Meanwhile, France's average maximum temperature on Wednesday was the highest for the month of March as the mercury hit 29.8 °C (85.6 °F), while Luxembourg had its first 25 °C (77 °F) reading for March.

The heat over Europe is expected to dissipate in the coming days, while a new area of high pressure is forecast over Iceland and northern Britain.

Forecast models call for significant cool-off in the days ahead, coming first from the NE and centered over SE Europe from April 3. This blast is followed by another significant and widespread cold wave which will first affect the United Kingdom and then spread to much of Europe.

The blast will also bring snow to many parts of the continent, most of it to the Alps and the Balkans.