An international team of scientists has found new evidence that a low-altitude meteoritic event occurred over Antarctica 430 000 years ago. Cosmic particles recovered on the summit of Walnumfjellet indicate that an unusual touchdown event reached the continent's surface. The study has implications for the identification and inventory of large cosmic events on Earth.

A research team of international space scientists led by Dr. Matthias van Ginneken from the University of Kent's School of Physical Sciences retrieved extra-terrestrial particles on the summit of Walnumfjellet within the Sor Rondane Mountains, Queen Maud Land, East Antarctica.

The chemistry of nickel and magnesium-rich bits did not match Earth rocks, but instead, it matched the proportions of elements seen in a type of meteorite called a carbonaceous chondrite.

Most of the particles range from 0.1 to 0.3 mm (0.004 to 0.012 inches) across, and more than half consist of spherules fused together into unusually-shaped globs. The spherules match that of particles found at two other sites in Antarctica, one more than 2 750 km (1 708 miles) away. 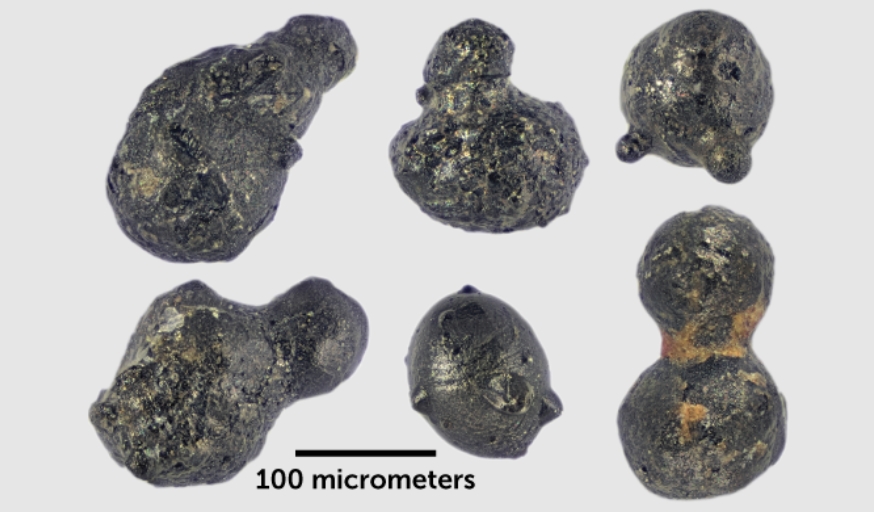 Image: The chemistry of nickel and magnesium-rich spherules found on a mountaintop in Antarctica matches that of a particular type of stony meteorite. Credit: Scott Peterson

This indicates that all of the materials originated in the same event. Since the other particles were found in ice cores and dated 430 000 years ago, the team presumed that the newly discovered particles from Walnumfjellet fell too.

The discovery suggests that an unusual meteoritic event occurred, where a jet of melted and vaporized meteoritic material resulting from a 100 m (328 feet) asteroid entry reached the surface at high velocity.

The type of explosion caused by a single-asteroid impact is considered intermediate, which is larger than an airburst but smaller than an impact cratering event. Blast waves may have plummeted a wide swath of the ice sheet, an area of about 100 000 square km (38 610 square miles).

While the explosion did not leave a crater, peak temperatures where the plume of hot gases reached Earth's surface would have reached 5 000 °C (9 032 °F), which may have melted a few centimeters of ice.

"To complete Earth's asteroid impact record, we recommend that future studies should focus on the identification of similar events on different targets, such as rocky or shallow oceanic basements, as the Antarctic ice sheet only covers nine percent of Earth's land surface," said Dr. van Ginneken.

"Our research may also prove useful for the identification of these events in deep-sea sediment cores and if plume expansion reaches landmasses, the sedimentary record."

"While touchdown events may not threaten human activity if occurring over Antarctica, if it was to take place above a densely populated area, it would result in millions of casualties and severe damages over distances of up to hundreds of kilometers."

Large airbursts, the most frequent hazardous impact events, are estimated to occur orders of magnitude more frequently than crater-forming impacts. However, finding traces of these events is impeded by the difficulty of identifying them in the recent geological record. Here, we describe condensation spherules found on top of Walnumfjellet in the Sør Rondane Mountains, Antarctica. Affinities with similar spherules found in EPICA Dome C and Dome Fuji ice cores suggest that these particles were produced during a single-asteroid impact ca. 430 thousand years (ka) ago. The lack of a confirmed crater on the Antarctic ice sheet and geochemical and 18O-poor oxygen isotope signatures allow us to hypothesize that the impact particles result from a touchdown event, in which a projectile vapor jet interacts with the Antarctic ice sheet. Numerical models support a touchdown scenario. This study has implications for the identification and inventory of large cosmic events on Earth.