The 2011 Atlantic Hurricane Season officially starts on Wednesday and it is possible that the tropics will turn active immediately in the Caribbean. The latest computer models continue to indicate the formation of an area of low pressure in the southwestern or central Caribbean within the next few days.

The warmer-than-normal waters of the Caribbean could eventually allow this low to develop into a more organized tropical system. The potential for a tropical depression or an even stronger system to take shape will also increase during the upcoming days as wind shear (strong winds high in the atmosphere) weakens. 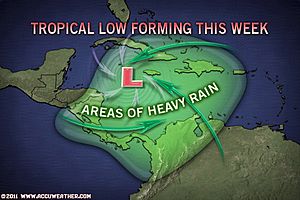 Wind shear is currently too powerful and disruptive for the formation of any tropical system. It is premature to say exactly where the tropical system will head if indeed development occurs.

The system may get steered northeastward in the direction of Jamaica, Hispaniola or eastern Cuba. Another scenario is that the system drifts into the northwestern Caribbean. With uncertainty, all residents and visitors across the Caribbean should check back with AccuWeather.com and monitor the progress of the low.

Regardless of whether the low strengthens into a tropical depression or named storm, flooding downpours will remain a threat along its path. If the low eventually becomes a tropical storm, it would acquire the name "Arlene." (AccuWeather)