Tropical Depression 8 could continue to intensify into Tropical Storm "Harvey" by tonight if it remains over the warm waters of the northwestern Caribbean, just north of Honduras.

The later landfall occurs, the stronger the tropical system and its winds will become.

As it strengthens its wind field will become larger and this will create a greater interaction with the north coast of Honduras.

Heavy rain will pour down over northern Honduras while it brushes past. As much as 8.0 inches of rain will fall over the mountains of central America, causing concerns for flash flooding and mudslides.

Tropical storm-force winds and pounding surf will also accompany the system as it moves onshore. After landfall in Belize or the southern Yucatan Peninsula, the mountainous terrain of southern Mexico should bring about rapid weakening.

The system could survive into early next week if it takes a more northerly track into the southwestern Gulf of Mexico. (AccuWeather) 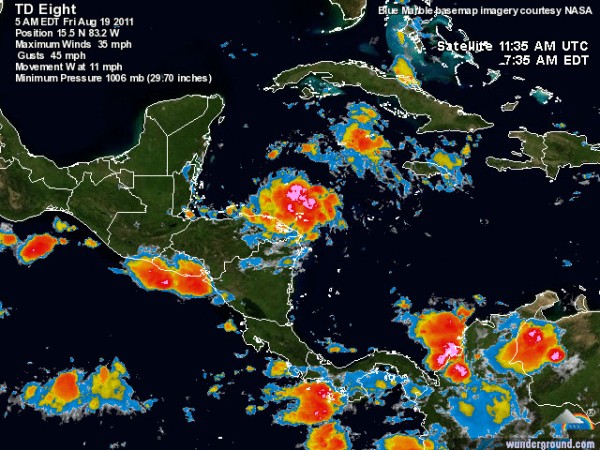