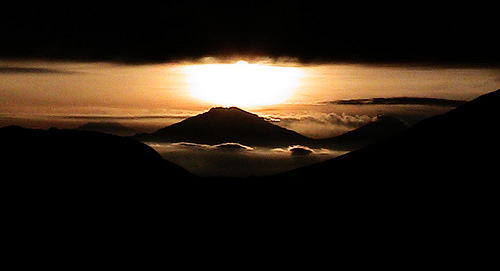 Authorities have raised the alert level for Mount Dieng in Central Java and have ordered the evacuation of residents living near the area after the volcano began spewing poisonous gas. Sutopo Purwo Nugroho, a spokesman for the National Disaster Mitigation Agency (BNPB), said on Monday that the alert status was raised from level 2 to level 3, which meant the volcano was showing signs of erupting. He said scientists recorded increasing volcanic activity on Sunday.

There was phreatic eruption which happened at the Timbang crater, one of the active craters, Sutopo said. He said the crater spouted jets of carbon monoxide and carbon dioxide — both colorless and odorless. Mount Dieng has six craters: Sileri, Siglagah, Condrodimuko, Sikidang, Sinila and Timbang. Scientists say the latter two are the most active. Sutopo added that the Volcanology and Geological Disaster Mitigation Agency (PVMBG) had declared a one-kilometer radius around Timbang off-limits. 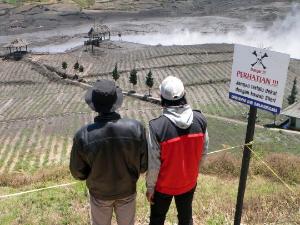 Several villages were covered by the danger zone. 1,179 people have been evacuated from Simbar and Sumber villages to  Batur subdistrict. PVMBG chief Surono said on Monday that Mount Dieng's eruption was marked by the emission of gas, which if inhaled in large amounts could be fatal. He said that in 1979, CO2 from the Timbang crater killed 149 people. During the rainy season, the greenhouse gas stays close to the surface of the earth, making it deadlier, Surono added. Muhammad Djasri, the Banjarnegara district chief, said the government on Monday declared a state of emergency in the area through to June 12. Sarkono, head of Batur subdistrict, said that although residents in the danger zone had already been evacuated, many villagers were sneaking back to the Mount Dieng area to tend to their land and livestock. (RSOE EDIS)

The geography of Indonesia is dominated by volcanoes that are formed due to subduction zones between the Eurasian plate and the Indo-Australian plate. The recent seismic upheaval we have seen in Fiji, Papua New Guinea, Kermadec and Tonga, New Zealand and the occasional seismic disturbance in Australia underscores the perilous risks which are increasing for countries along the Indo-Australian Plate, particularly Indonesia.

Besides the Lake Toba super-volcano, Indonesia, there are about 130 active volcanoes. They are restless due to the geology of the archipelago and the increasing seismic tension reverberating from tectonic plate agitation. One day there will be multiple cascading eruptions. On 1st May, 46 deep earthquakes and 6 shallow earthquakes shook the Gamkonora volcano. Merapi and Singabung volcanoes are also stirring. (The Extinction Protocol)