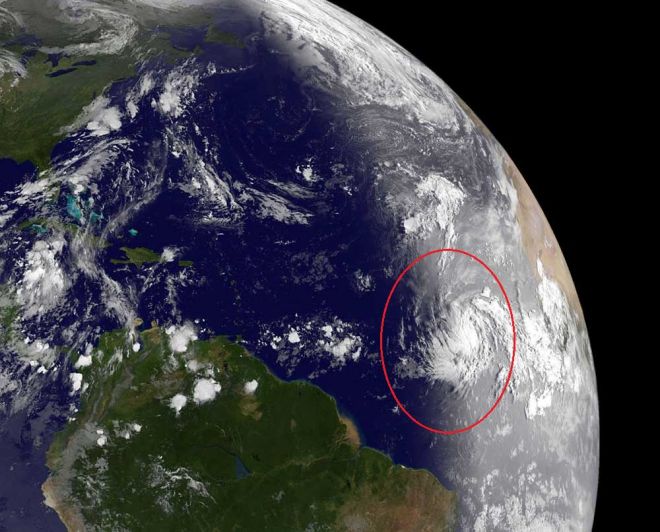 While much of the mid-Atlantic and New England continues to suffer from residual flooding and power outages in the wake of Irene, a new storm in the Atlantic bears some watching.Katia became a tropical storm early Tuesday morning after first forming as a tropical depression south of the Cape Verde Islands Monday morning. The storm is moving over very warm sea surface temperatures and into an area with weaker winds aloft. These factors have allowed Katia to strengthen throughout the day Tuesday.

Further intensification is expected with the storm potentially becoming a hurricane by Wednesday night or early Thursday morning. Katia could become a major hurricane by the upcoming weekend as it passes north of the Lesser Antilles. (National Hurricane Center)

Katia will continue on a west-northwest track around an area of high pressure over the Atlantic through the weekend. This should take the storm north of the Leeward Islands, which is good news for a region that was hit hard by heavy rain and flooding with Irene. While the forecast is for Katia to eventually turn and head northward and potentially out to sea, it is certainly possible that the storm brings some impacts to the East Coast or Atlantic Canada later next week.

Another factor to keep an eye on is the potential for a tropical system to develop in the Gulf of Mexico this week. Should a tropical system organize in the Gulf, it could completely alter the upper-level pattern, thereby, changing the course of Katia in the long term. (Accuweather) 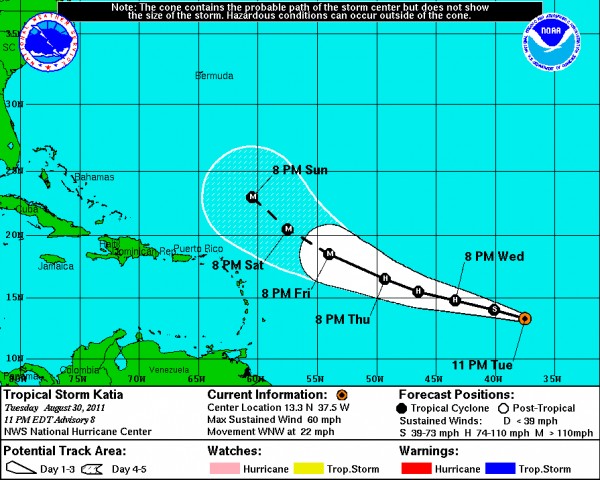 Katia was added to this year’s rotating storm roster to replace Katrina which killed more than 1,800 people in August 2005 when it made landfall near the Louisiana-Mississippi. Storm names are retired if they caused a large number of fatalities. Katia is the eleventh named storm of the 2011 Atlantic hurricane season, following Tropical Storm Jose which formed south of Bermuda on late Sunday afternoon. Jose passed west of Bermuda, causing minor damage but no casualties. (IWO)