Subtropical Storm "Ana" formed around 02:00 UTC on May 8, 2015 and became the first named storm of the 2015 Atlantic Hurricane Season. Hurricane hunter aircrafts thus began their first flights, a month before the official start of the season. Ana is the first such pre-season storm since 2012.

Heavy rains is expected over the coast southeastern portion of the United States over the next several days. 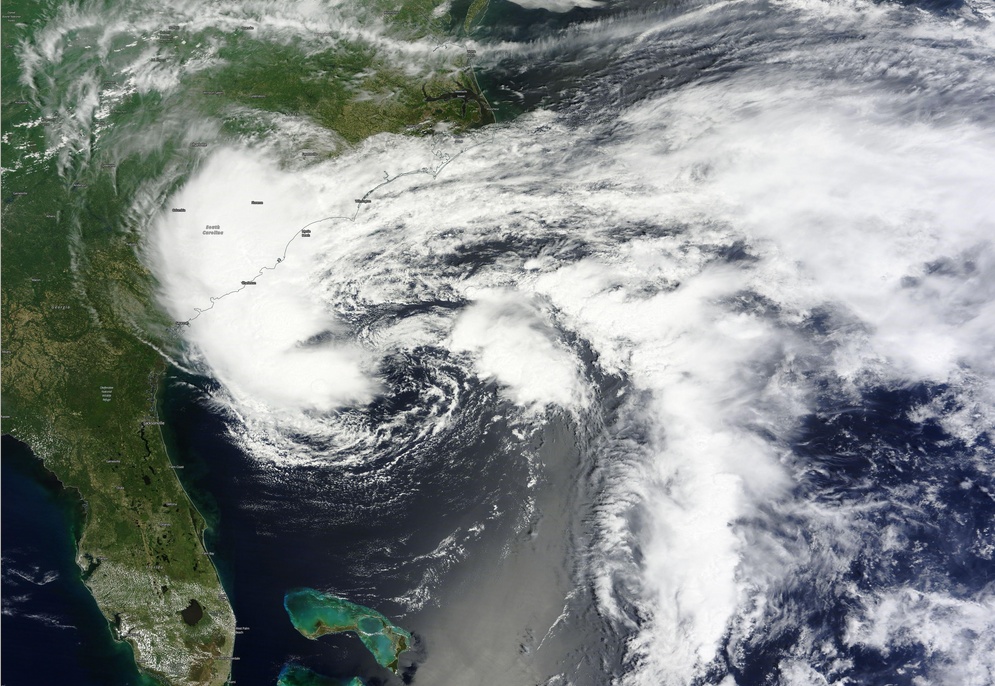 Tropical Depression 90L on May 7 before it became Subtropical Storm "Ana" on May 8, 2015. Image credit: NASA Terra/MODIS.

In their Forecast Discussion issued 09:00 UTC today, National Hurricane Center (NHC) said Ana has remained convectively challenged overnight with only a small cluster of thunderstorms noted revolving through the southern semicircle, and only shallow isolated convection having recently developed in the inner-core region.

The initial intensity remains at 74 km/h (46 mph) based on previous recon data and the lack of any significant change in the overall convective pattern since that flight, NHC said.

The initial motion continues to be a slow drift to the northwest or north-northwest at only 1.8 – 3.7 mh/h (1.1 – 2.3 mph). Ana is embedded in a blocking pattern that is expected to persist for the next 3 days or so until a strong mid-tropospheric low/trough currently located over the western U.S. moves into the central and southern Plains and nudges Ana northward and eventually northeastward by early next week.

During the next 48 hours, Ana is expected to move toward the southeastern U.S. at a very slow pace. The global and regional models are in remarkably good agreement on this weak steering pattern persisting through the weekend so, the official forecast track is essentially just an update of the previous advisory track and lies close to the consensus model TVCA.

Water vapor imagery indicates that a tight mid-/upper-level low has finally become juxtaposed with the surface low, and the two have remained nearly stationary over the relatively warm waters of the Gulf Stream.

However, intrusions of dry air into the inner core have been noted in satellite imagery and upper-air data during the past several hours, which have likely been the main reason for the lack of deep convection developing near the center. But with the lows now vertically stacked and expected to remain over SSTs of at least 25 °C for the next 24 hours, some slight strengthening is expected. Ana could also transition to a tropical storm during that time, according to NHC.

The risk to lives and property will be low for land areas, due to the expected minimal strength of Ana. However, there are some risks for people remaining on land and significant danger for those venturing in the surf or heading to sea, AccuWeather said.

"The slow movement of the storm will bring several straight days of periods of rain to portions of the Carolinas and perhaps southeastern Georgia, with the heaviest rain falling during the afternoon and evening hours," their Hurricane Expert Dan Kottlowski said.

"Rainfall averaging 5 – 10 cm (2 – 4 inches) in the coastal Carolinas will raise the risk of flooding on roadways and low-lying areas. Persistent onshore winds will also bring the potential for coastal flooding in portions of North Carolina and southeastern Virginia, particularly at times of high tide. The constant bombardment of rough surf will lead to beach erosion focusing on North Carolina. The rough surf will cause frequent and strong rip currents, which will pose dangers to bathers." 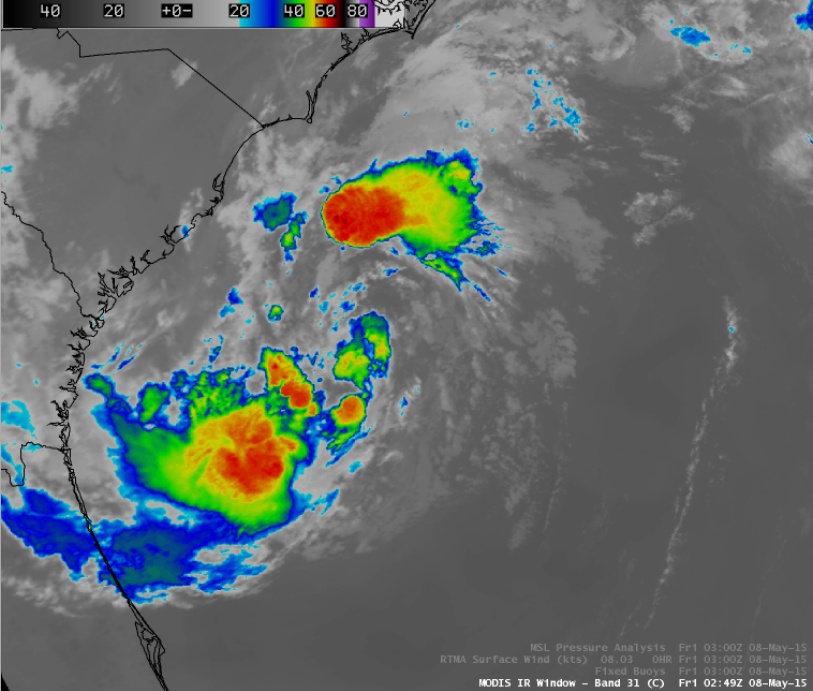 MetOp-A passed over the southeast United States just after 15:00 UTC on May 7, 2015. The ASCAT scatterometer data (below) show a well-defined low-level circulation (with most winds just below tropical storm force) south and east of the deepest convection off the South Carolina/Georgia coasts. 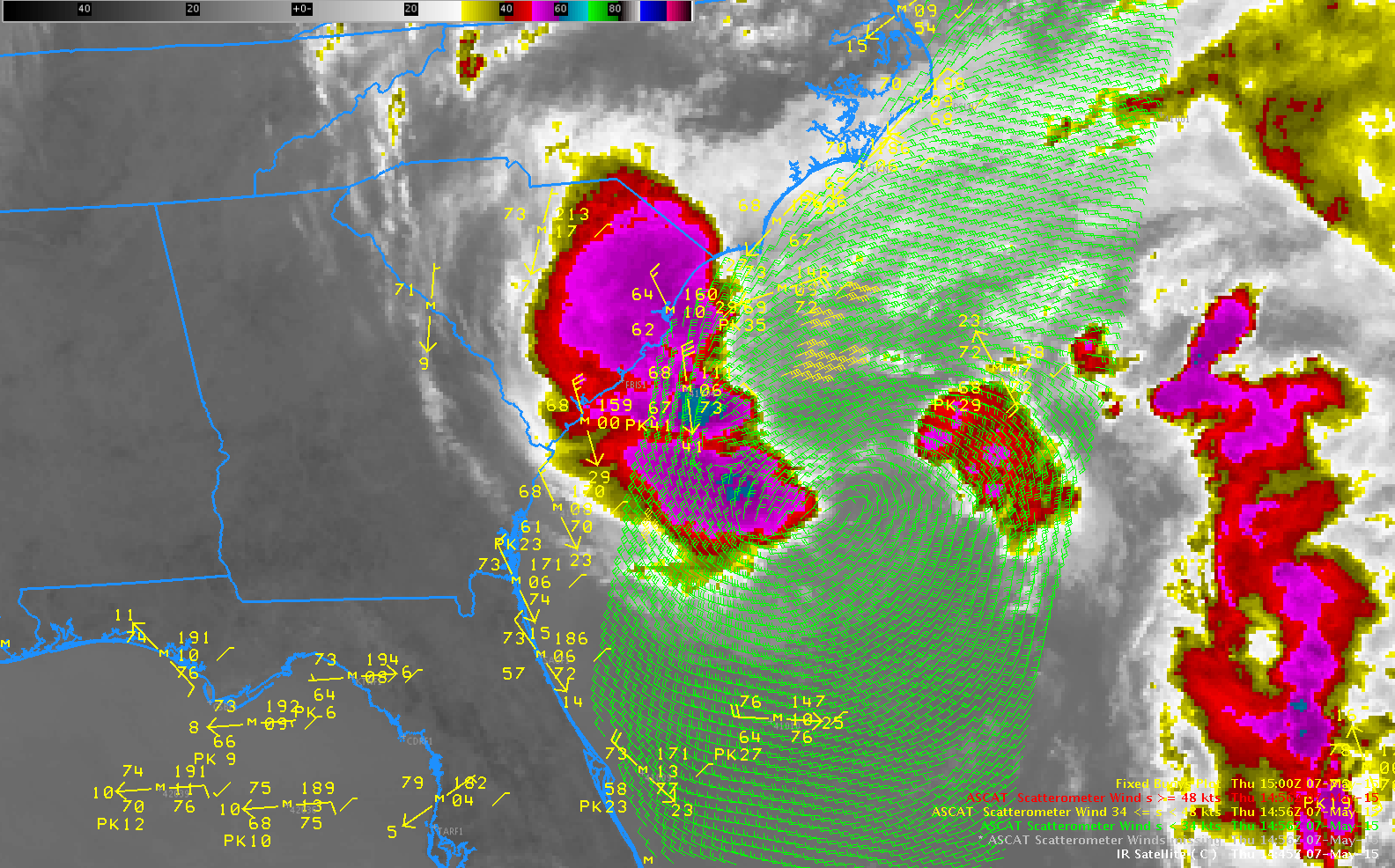 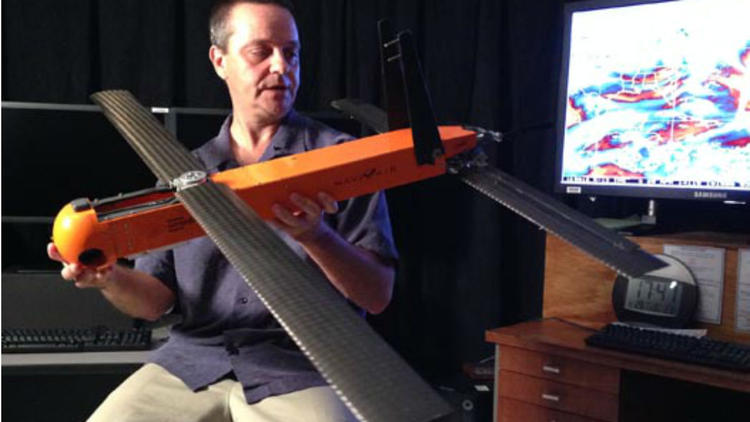 The 6-kg, 1.5-meter wide Coyote unmanned aircraft designed to fly into most violent quadrants of hurricanes became the first drone deployed directly inside a hurricane from NOAA hurricane hunter aircraft in September 2014 and NOAA is planning to send more of them into this season's hurricanes.

The 2015 version of Coyote received major upgrades and it now has sophisticated sensors to obtain a more complete picture of the storm and improve forecasts.

These drones are operated from hurricane hunter airplanes and will be cruising at the speed of about 100 km/h into the lowest levels of hurricanes to obtain data no other aircraft can, simply because it's too dangerous for a manned crew. Their primary mission will be to measure the barometric pressure, temperature and wind speed inside a storm.

"One of the projected flight plans would be to use the Coyote to find out how far the strongest winds extend from a storm center," Erica Rule, spokeswoman for NOAA's Hurricane Research Division in Miami, said.

The overall effectiveness of Coyotes was limited last year because hurricane hunter plane had to remain within 8 to 11 km of Coyote to pick up the signal, but 2015 version of Coyote should be able to fly between 100 and 150 km away from the hurricane hunter.