NOAA's CPC forecasters say the 2015 Atlantic hurricane season will likely be below-normal, but warn there is no reason to believe coastal areas will have it easy.

“A below-normal season doesn’t mean we’re off the hook. As we’ve seen before, below-normal seasons can still produce catastrophic impacts to communities,” said NOAA Administrator Kathryn Sullivan, Ph.D., referring to the 1992 season in which only seven named storms formed, yet the first was Andrew – a Category 5 Major Hurricane that devastated South Florida.

“The main factor expected to suppress the hurricane season this year is El Niño, which is already affecting wind and pressure patterns, and is forecast to last through the hurricane season,” said Gerry Bell, Ph.D., lead seasonal hurricane forecaster with NOAA’s Climate Prediction Center. “El Niño may also intensify as the season progresses, and is expected to have its greatest influence during the peak months of the season. We also expect sea surface temperatures in the tropical Atlantic to be close to normal, whereas warmer waters would have supported storm development.”

Included in today’s outlook is Tropical Storm "Ana", but its pre-season development is not an indicator of the overall season strength. Ana’s development was typical of pre-season named storms, which often form along frontal boundaries in association with a trough in the jet stream. This method of formation differs from the named storms during the peak of the season, which originate mainly from low-pressure systems moving westward from Africa, and are independent of frontal boundaries and the jet stream.

With the new hurricane season comes a new prototype storm surge watch/warning graphic from NOAA’s National Hurricane Center, intended to highlight areas along the Gulf and Atlantic coasts of the United States that have a significant risk of life-threatening inundation by storm surge from a tropical cyclone. 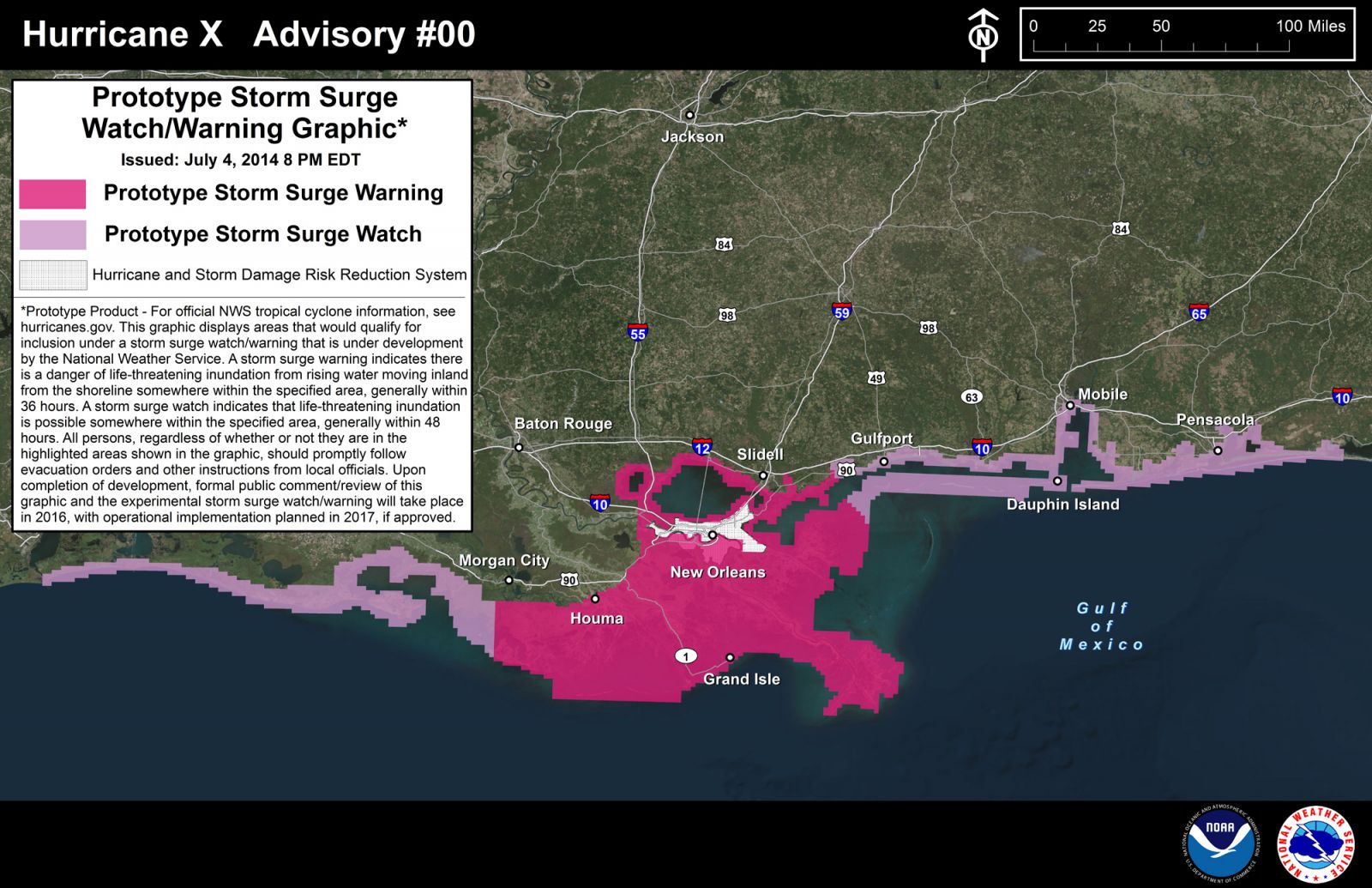 NOAA's National Hurricane Center will use a prototype storm surge graphic this season to highlight areas at risk for inundation from storm surge. Credit: NOAA.

The new graphic will introduce the concept of a watch or warning specific to the storm surge hazard. Storm surge is often the greatest threat to life and property from a tropical cyclone, and it can occur at different times and at different locations from a storm’s hazardous winds. In addition, while most coastal residents can remain in their homes and be safe from a tropical cyclone’s winds, evacuations are often needed to keep people safe from storm surge. Having separate warnings for these two hazards should provide emergency managers, the media, and the general public better guidance on the hazards they face when tropical cyclones threaten.

Also new this season is a higher resolution version (2 km near the storm area) of NOAA's Hurricane Weather Research and Forecasting model (HWRF), thanks to the upgrades to operational computing. A new 40-member HWRF ensemble-based data assimilation system will also be implemented to make better use of aircraft reconnaissance-based Tail Doppler Radar data for improved intensity forecasts. Retrospective testing of 2015 HWRF upgrades demonstrated a five percent improvement in the intensity forecasts compared to last year.

NOAA will issue an updated outlook for the Atlantic hurricane season in early August, just prior to the historical peak of the season.