Berkeley Lab scientists David Romps and Rusen Oktem made advancements in stereophotogrammetry, a technique which uses photos to make 3D measurements of cloud boundaries, transforming it from labor-intensive process to a tool that can now be used on a regular basis. Improvements are based on new algorithms that can quickly find feature points and match them. The innovation finally allowed scientists to use this technique in open ocean cloud studies.

"Our two eyes allow us to calculate distances to objects based on the slight differences they perceive in the positions of objects. This slight difference – called "parallax" – can be observed by holding a finger in front of your face and alternating which eye you keep open and which you hold closed. Using digital cameras, we can use parallax to calculate the precise 3D position of any object in the field of view," Romps and Oktem explained.

The photos, captured by two off-the-shelf digital cameras situated about 1 kilometer apart facing Miami’s Biscayne Bay, allow Romps, a climate scientist who specializes in clouds, to measure how fast the clouds rise, which in turn can shed light on a wide range of areas, ranging from lightning rates to extreme precipitation to the ozone hole. 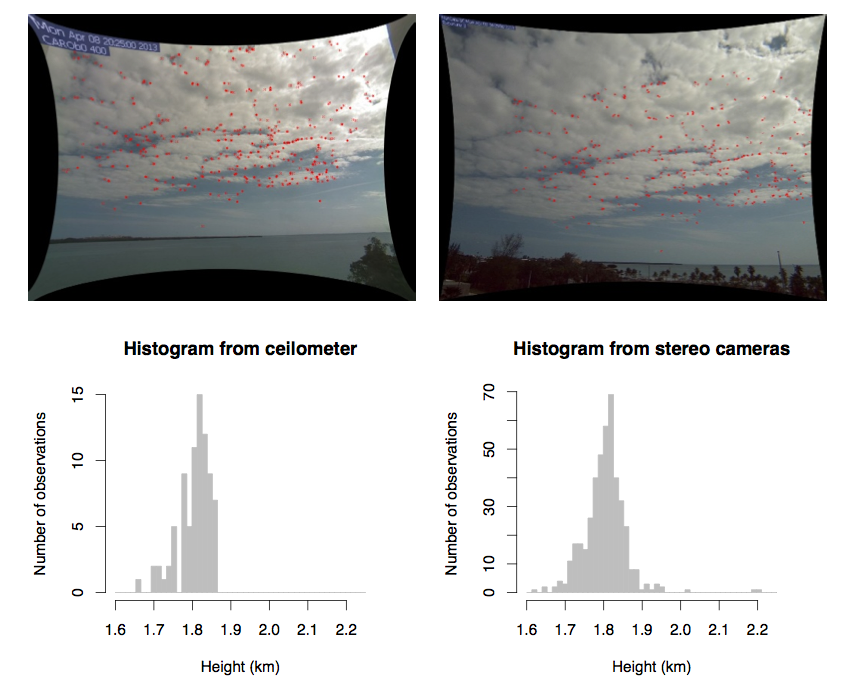 “We want to answer a very basic question: with what speeds do clouds rise through the atmosphere? This is very difficult to answer by any technology other than stereophotogrammetry,” he said. “Knowing their speeds is important for several reasons; the important one is that we lack a really basic understanding of what processes control these clouds, the levels they peter out at, and how buoyant they are.”

While stereophotogrammetry, which uses photos to make 3D measurements of cloud boundaries, has been used before to study cloud behavior, Romps’ innovation was a technique that does not require a reference point, such as a mountain or other land-based feature. This allows scientists to study clouds over the open ocean.

“We have a lot of measurements of clouds over land, but far fewer over the ocean,” Romps said. “The behavior can be quite different. For example, looking at satellite data, you see continental areas light up with a lot of lightning and oceans less so.”

The technique was detailed in a paper published last year in the Journal of Atmospheric and Oceanic Technology, titled “Stereophotogrammetry of Oceanic Clouds.” Co-authors include Berkeley Lab computing experts Oktem, James Lee, Aaron Thomas, and Prabhat, and Paquita Zuidema of the University of Miami.

The paper describes how to set up and calibrate the two cameras; Romps and his team also devised algorithms to automate the 3D reconstruction, quickly finding feature points and matching them. The accuracy of the technique was validated with lidar and radiosondes.

Using stereophotogrammetry, Romps has measured the speeds of shallow clouds rising through the atmosphere at 1 to 3 meters per second and of deeper clouds rising at speeds in excess of 10 meters per second. “The updraft speeds play an important role in the microphysics, general precipitation, and aerosol processing, which all impact climate simulations,” he said.

Updraft speeds can also impact lightning rates, as faster clouds tend to produce more lightning. And if clouds are fast enough they can penetrate the stratosphere. “They can throw out water vapor and ice, which sets the humidity of the stratosphere, and that has an impact both because water vapor is greenhouse gas and also because water vapor, through a sequence of events, has an effect on the ozone hole,” Romps said.

The largest source of uncertainty in today’s climate models is clouds. “We are still seeking a fundamental theory for moist convection, or what we call convection with phase changes. Without that theory, it is difficult to construct more accurate parameterizations [or models] of clouds that go into global climate models,” Romps said.

“Stereophotogrammetry can provide very useful information in this quest.”

A second set of cameras

The Department of Energy’s Atmospheric Radiation Measurement (ARM) program has funded a second set of cameras at its Southern Great Plains site in Oklahoma, the largest and most extensive climate research site in the world.

Across about 142 000 square km (55 000 square miles), clusters of lidar, radar, and other sophisticated monitoring equipment gather massive amounts of data to study the effects of aerosols, precipitation, surface fluxes, and clouds on the global climate.

The next steps are to combine the stereophotogrammetric data with other observations at the ARM site to answer basic questions about cloud life cycles. In particular, Romps and colleagues want to understand what environmental conditions can be used to forecast the sizes, speeds, depths, and lifetimes of convective clouds.