A strong cold front will bring high winds to Christchurch Tuesday. With clean-up operations still in full swing, any weather will cause issues. Wind gusts past 50 mph are expected in the city. The winds will be strongest from the northeast, right ahead of the cold front, when the highest gusts could reach 70 mph.

Public officials in Christchurch are particularly concerned about trees that line river banks. The earthquake caused the river banks to crack and shift, making trees unstable. This would make it easier for high winds to topple trees. There is also concern that winds will kick up the dust which is widespread in the city center.
Rainfall with the front is not expected to be heavy. However, some people displaced by the earthquake are in campgrounds outside of town. If rain is heavier than expected, these people may have to deal with flooding. 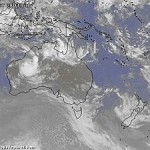 Meanwhile, in neighboring Australia, flooding continues to make headlines. Rain has been pouring down across northern portions of the country. Babinda, in northern Queensland, has picked up just over 30 inches of rain during the past seven days. Several other locations have received nearly 20 inches of rain over the past week.
Heavy rain has also soaked northern Western Australia. In a 24-hour period, 4-6 inches of rain fell in a few locations. Flooding in this area significantly hinders large-scale mining operations that happen in the region.
The latest culprits for the flooding are two tropical lows that moved inland before they had a chance to develop into tropical cyclones; however, the latest satellite imagery shows these features still have well defined circulations. They are expected to move very little over the next few days, continuing the flooding threat. (accuweather)

A strong and shallow earthquake registered by the USGS as M6.0 hit New Ireland region, Papua New Guinea at 10:36 UTC on November 30, 2021. The agency is reporting a depth of 10 km (6.2 miles). EMSC is reporting the same magnitude and depth. The epicenter was located...