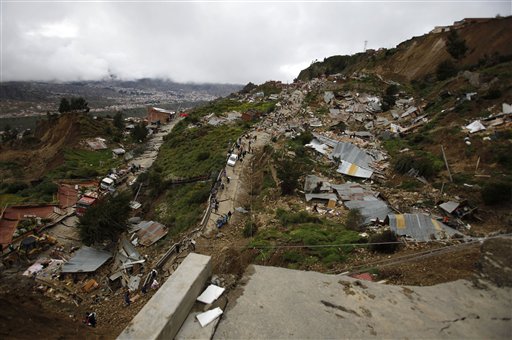 Heavy rains caused a hilltop to collapse in a poor neighbourhood of the Bolivian capital Sunday, cracking roads, destroying at least 400 homes and burying people’s belongings under mud and debris. There were no fatalities but significant damage from the landslide in the barrio of Callapa, La Paz Mayor Luis Revilla said. 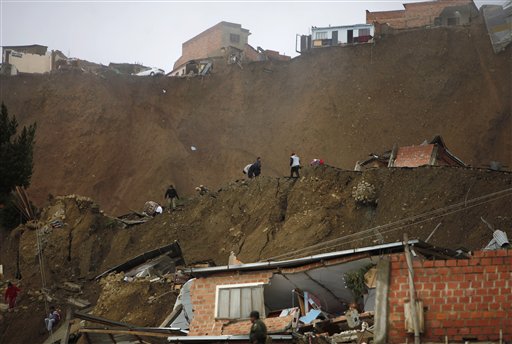 Edwin Herrera, a city government spokesman, called Sunday’s slide the worst that La Paz has ever seen – and he said the earth was still moving downhill. About 5000 people are affected with the landslide. Residents began evacuating late Saturday when the hill, saturated after prolonged rains, began sliding and cracks appeared in streets and homes.

By day, amid a persistent drizzle, some residents scrambled over the unstable terrain to try to rescue furniture and other possessions from the muck. But continued earth movements brought down more homes, and police cordoned off the area, saying it was too dangerous.Meanwhile, crews with heavy equipment were trying to keep the earth from backing up a river channel. Defence Minister Ruben Saavedra said soldiers were mobilized to aid evacuation and recovery efforts.

A hilltop cemetery was split in two when an enormous crack opened in the ground. Heavy rains are blamed for 44 deaths around the country in recent weeks. Officials initially reported around 100 houses destroyed but later determined that 400 were wiped out over an area covering 200 to 250 acres (80 to 100 hectares).

Slides are common in La Paz, perched at about 11,900 feet (3,640 metres) above sea level and surrounded by hills covered with poor communities. Another collapse a little over a week ago destroyed 20 homes. (AP/Dallas News)