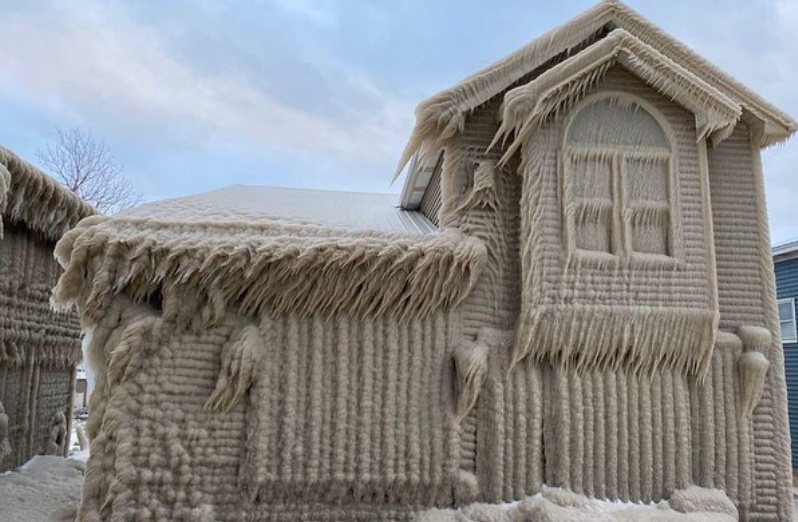 An intense lake effect snow raged across Upstate New York on February 28, 2020, leaving areas along Lake Erie entirely covered in ice– in some areas up to 4 m (12 feet) thick. Residents described the conditions as surreal, remarking that it was the first time ice coatings had been that severe.

The population of Hamburg, which is situated on the edge of Lake Erie woke up to find their homes perfectly enclosed in thick ice.

"It looks fake, it looks unreal," said one resident named Ed Mis. "It's dark on the inside of my house. It can be a little eerie, a little frightening."

Mis has lived in the town for the past eight years, and while the neighborhood has experienced thick ice coatings before, he said this particular event was the first time it has been this extreme.

He added that his backyard was even worse at it was engulfed in 4 m (12 feet) of frozen water. "I actually had to go out a secondary door and then chisel my way back into the house by breaking the ice."

"We're worried about the integrity, of structure failure when it starts to melt, because of the weight on the roof," said Mis, noting that the aftermath may possibly cause damage to the houses.

"It's a beautiful sight, but I don't want to live through it again."

Another resident named Lise Kreuder said she has never seen conditions this surreal since the 1980s, and that it was affecting her home.

"My garage floor is started to show cracks," Kreuder stated. "Last night we took in a small amount of water."

"As a cold, dry air mass moves over the Great Lakes region the air picks up lots of moisture from the Great Lakes," said National Severe Storms Laboratory (NSSL).

"This air, now full of water, dumps the water as snow in areas generally to the south and east of the lakes."

I've never experienced snowfall rates like this before. Roughly 4 inches in the last 70 minutes since we have been in this spot. It's beautiful. #LakeEffectSnow #LakeEffect #watertown @JimCantore @ReedTimmerAccu pic.twitter.com/cpiPNRyUz2

Afternoon update from Oswego County, NY! Heftiest of lake effect snow bands moved in around lunchtime and quickly put down 4-5" in a couple hours time! Only 8 hours into this event….@weatherchannel @NWSBUFFALO #LES2020 #lakeeffect pic.twitter.com/V40iogx4d0

This is what rt 12 between Watertown and Copenhagen looked like at 7am this morning. White out conditions are still being seen. #NYwx #LakeEffect pic.twitter.com/TCiqynbRIS

Wow! Heavy lake-effect snow piled up in New York, on Friday and Saturday as shown here by a webcam, completely burying a 4-foot fence and snow stake! https://t.co/T9bqgxRWrP pic.twitter.com/weUzeUC0BR